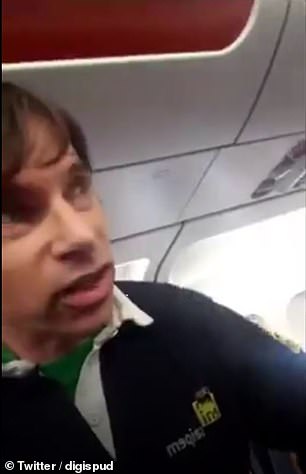 
An easyJet passenger with lung damage was withdrawn from a flight for not wearing a face mask as staff reportedly refused to accept his medical exemption without certification.

Brian Spinks of Falkirk, Scotland, boarded a flight from Luton to Edinburgh on Tuesday but was asked to disembark despite an illness.

The 46-year-old told staff that he did not have a medical letter as it was not issued by the Scottish government.

Mr Spinks claims he had lung damage from whooping cough two years ago.

However, the easyJet website states that face mask exemption passengers must have a medical certificate, document from a government website or a lanyard "available upon request to airport staff and crew". 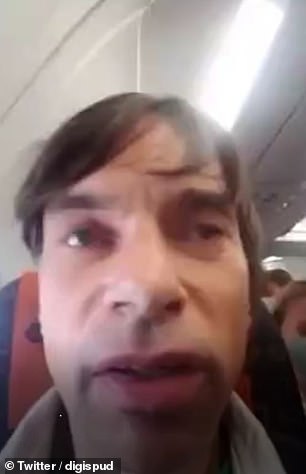 Brian Spinks, 46, was removed from an easyJet flight from Luton to Edinburgh for not wearing a face mask. Mr Spinks claims he had lung damage from whooping cough two years ago

In a video, Mr. Spinks speaks to the camera and explains the situation. He claims a passenger also tried to attack him by grabbing his cell phone.

He films while cops walk down the aisle on the plane and shares that he paid for the £ 82 flight.

But the policewoman replies, "I understand, sir, but if you are not ready to wear a mask on the flight, unfortunately you have to come with us."

Mr Spinks reiterates that he has an exception, but the officer says he will have to disembark without certification.

ICT engineer Spinks continues to debate with the officer, claiming that the GDPR means he is legally not required to submit a letter "on the recommendation of the government".

Mr Spinks asks officers why they need to see his ID before he is removed from the flight.

Police conclude that easyJet's rules apply as the aircraft is privately owned. 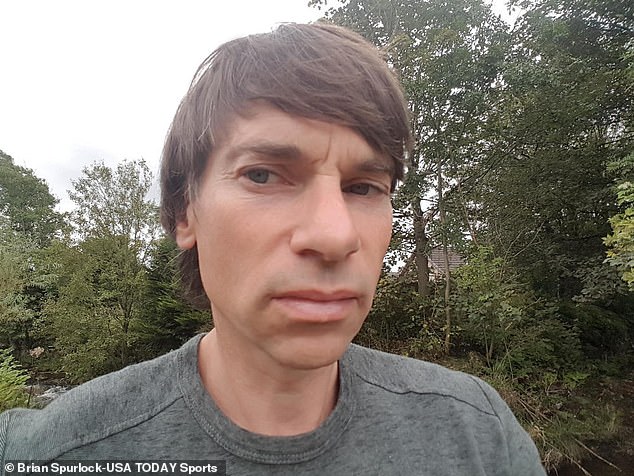 Mr Spinks was removed from the plane on Tuesday as easyJet rules require those exempted from it to have a medical certificate, document from a government website, or a lanyard

When Mr. Spinks leaves, other passengers call him a "time waster" and throw sarcastic remarks at him and start applauding while calling him a "selfish p *" and "an absolute d *** head".

Mr. Spinks is met by a group of officers waiting to take him off the pavement and put him in a police car.

He says, “I've just been thrown from the flight and I'm in the back of the police car. They tried to put me in the cage, but I objected. So just on the way back to the terminal. & # 39;

Mr Spinks claimed that he was "physically shaken" by the ordeal that "stranded" him in London. He ended up spending an extra £ 70 to get the train home.

Mr. Spinks said, “It was really terrible, I can't believe the way people talk to each other and how much abuse I've received. How did we as a society understand this point?

“I am already vulnerable because of my condition. They look for the weakest in society and it's disgusting. It's so discriminatory.

“It is impossible for me to wear a mask on an airplane due to my condition.

"In the end, I felt pretty bad and I was absolutely exhausted." 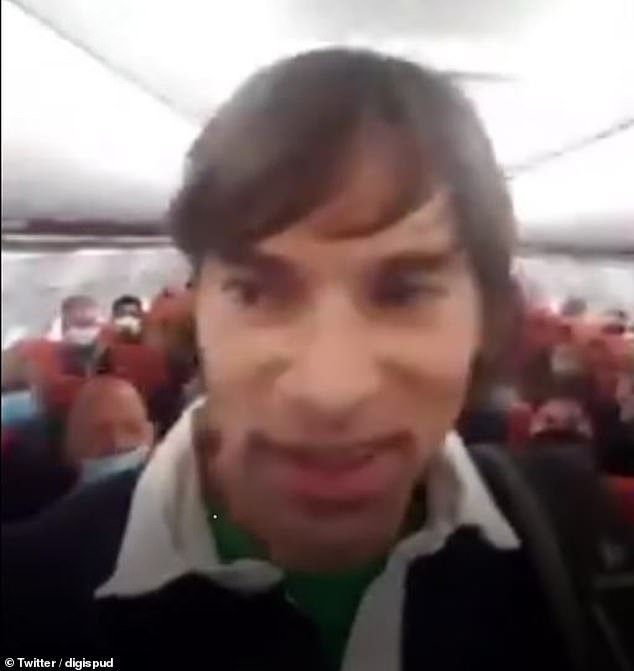 Video footage shows police officers removing Mr. Spinks from the plane and applauding other passengers while calling him a "selfish p *" and an "absolute d *** head".

The video was shared on Twitter on Wednesday by Philip MacFarlane, Mr Spinks' friend, who complained to easyJet.

EastJet's social media team responded to the clip and explained the safety rules.

Mr. Spinks said, “I explained that the government advises that I do not need a doctor's letter for air travel. That is why doctors do not issue letters.

At that moment the steward got quite aggressive and put a mask on my face.

At this point, other passengers also began to berate me, and the steward did nothing to intervene.

“I was very concerned for my safety at that point and started filming. The steward got even more aggressive when I started recording. & # 39;

However, the video has sparked a backlash from social media users, many of whom support easyJet's position on the rules. 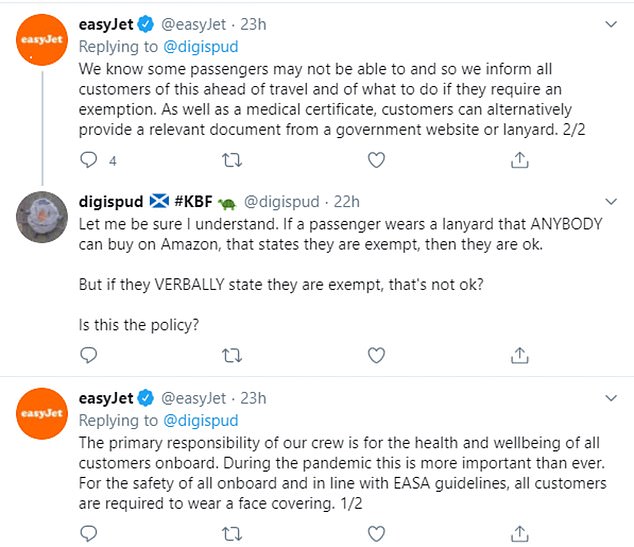 The video was shared on Twitter by Mr. Spinks' friend Philip MacFarlane on Wednesday and easyJet replied

However, the video has sparked a backlash among social media users as many users support easyJet's position on the rules

One user said: & # 39; I'm sorry, but I will support Easyjet with this. In the end, the safety of everyone on the flight must come first.

"Perhaps those with a real medical reason not to wear a mask shouldn't be flying."

WHAT ARE EASYJETS FACE MASK RULES?

The EasyJet website states that passengers must wear an appropriate face mask in order to be able to board at the gate and throughout their flight.

This is mandatory on all easyJet flights and passengers are not allowed to board if they arrive at the gate without a passenger.

Masks are required when entering and driving through the airport terminal at the departure and arrival airports.

The only exceptions are children under the age of six and children with a valid medical reason as evidenced by either a medical certificate, document from a government website, or a lanyard (requirements vary from country to country).

This must be available to airport staff and crew upon request.

EasyJet adds that people must check government websites for the latest guidelines from the local government before traveling.

The airline added that masks should typically be replaced every four hours so that passengers and those you travel with are well looked after for the duration of the trip.

But one person supported Mr. Spinks and wrote, "Hopefully he will take legal action."

An easyJet spokesman told MailOnline: & # 39; The main responsibility of our crew is the health and wellbeing of all customers on board. This is more important than ever during the pandemic.

Since Mr. Spinks refused to give a reason for the exemption or to provide any exceptions, we could not allow him to travel. Due to the disruptive behavior towards our crew, the police had to visit the plane and escort him from the flight.

& # 39; For the safety of everyone on board and in accordance with EASA guidelines, all customers must wear a face covering. We know that some passengers may not be able to do this, so we advise all customers of what to do if they need an exemption before they travel.

"In addition to a medical certificate, customers can alternatively provide a relevant document from a government website or a lanyard."

MailOnline has asked the Bedfordshire Police for a comment.

This came shortly after an easyJet pilot was accused of "ambushing" a passenger with chronic asthma after asking the man to wear a mask or being thrown from his flight.

Nick, who spoke in partial anonymity, was told by the plane's pilot that he had to wear a face covering despite having chronic asthma.

He told the BBC that he was harassed by the other passengers on the hour-long flight from Jersey to Gatwick and that he had no choice but to wear a mask – which left him hyperventilating.

“Whether it's a polo neck or a scarf around your face, the feeling is suffocating. I find it harder and harder to breathe, ”he said.

Nick showed the plane's crew an official exemption card that he printed out on the government website before flying to Jersey Island last month to see his family.

Nick's flight was delayed by 30 minutes, which the other passengers had blamed him for.

In a 30-second video, other passengers cheered and applauded the pilot after telling Nick he would be thrown off the flight. 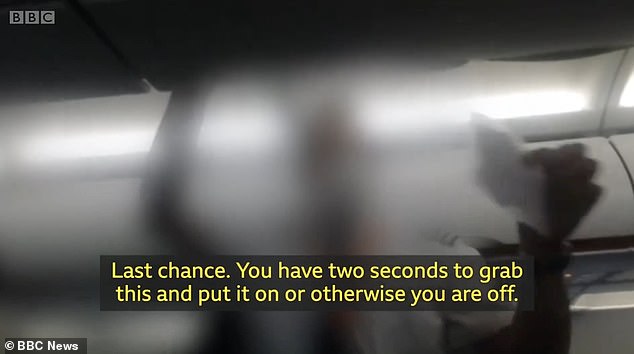 Nick, who spoke partially anonymously, was told to put on a face mask, although he said he couldn't breathe during the hour-long flight from Jersey to Gatwick

His exemption letter was accepted on the way to the island, but denied on the return journey – Nick was confronted "about six times" with employees.

Footage filmed on Nick's cell phone showed the pilot telling Nick that if he wasn't wearing a mask, he was "absent".

EasyJet said all customers are required to wear face covering, but acknowledged that some passengers cannot.

An airline statement said: “We recently updated our policies to reflect the latest UK Government directives so that customers can alternatively provide a relevant document from a government website or lanyard in addition to a medical certificate.

"We are sorry that this new policy was not recognized by the crew on this occasion."

Asthma UK and British Lung Foundation director Sarah MacFadyen said it was "impossible to breathe with a mask" for a small number of people with asthma.

She added, "That's why these exemptions exist so that they can still go out and live their lives."