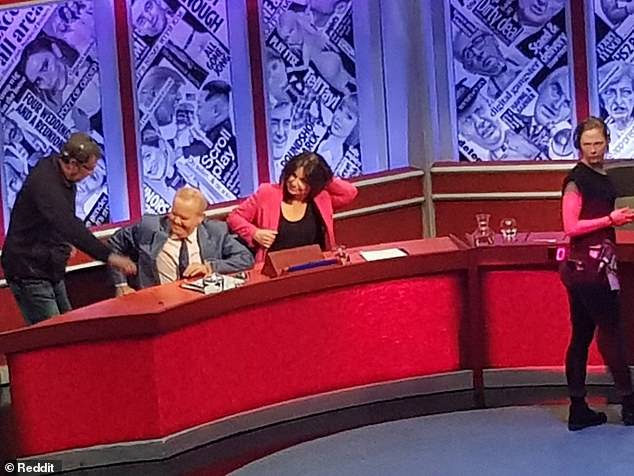 
Angry viewers of the BBC show "Do I have news for you?"

The BBC's editorial guidelines on electoral periods do not allow programs that do not achieve "equal representation".

However, many quickly pointed out that MEP candidate Nigel Farage had appeared in the BBC Question Time earlier this week and will also appear on the Andrew Marr Show tomorrow.

The BBC pulled the show off with Ms. Allen, who is not a candidate for MEPs, after fears that this would violate the impartiality of the elections, although Mr. Farage would appear in flagship shows twice a week.

Change UK has now written to Lord Hall about the cancellation and asked the company to change the decision to "lock our party".

The BBC has filmed a series of Have I Got News For You (image) due to impartiality concerns (image: an audience has photographed the set and posted it on Reddit). 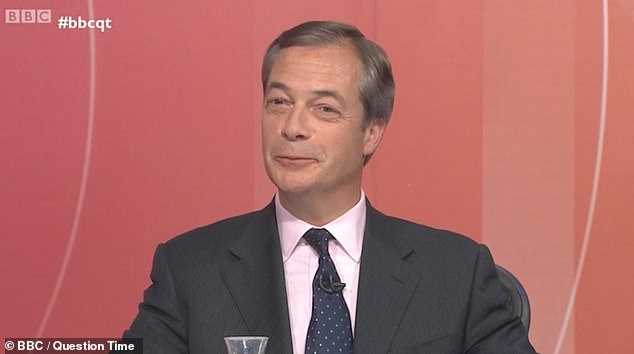 Twitter users absolutely wanted to use the BBC's decision and emphasized that Ms. Allen was not running as a candidate

While social media users like Andrew Wheatley said it was an interesting decision by the BBC.

& # 39; Nigel Farage in Question Time for the 34th time on Thursday is fine, but doesn't Heidi Allen in #HIGNFY? Interesting decision.

While Joe Watkinson said, "So if I have news for you, it was pulled because Heidi Allen appeared on it and the BBC considered it" inappropriate to present party leaders ", why was Nigel Farage allowed to appear in Question Time?"

Others wanted to point out that Ms. Allen, who was drawn from HIGNFY, did not run as a MEP and that it was Mr. Farage.

Martin O & # 39; Lowery said: "Heidi Allen is not a candidate for the European Parliament election." 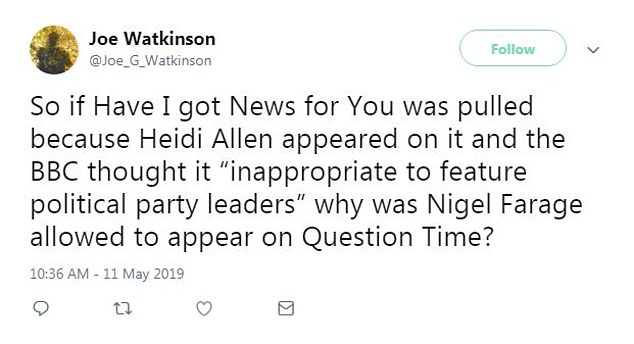 Another said that even Ms. Allen directed the show that the moderator did not control the content

Change UK campaign coordinator Chris Leslie also called for a "full last-minute explanation of the BBC's decision to release (on Friday) the episode of Have I Got News For You", in which interim director Heidi Allen was represented on the panel .

In the letter's announcement, Leslie said: “British politics is broken and if we want to fix the problem, people need to be able to hear from all parties involved in the upcoming European elections – including Change UK with our support for a referendum and stay.

& # 39; The BBC plays a vital role as our national broadcaster, but we're concerned that a few big calls have been wrong in the past week.

This is particularly worrying as a similar decision about Nigel Farage's appearances has apparently gone the other way over the years. 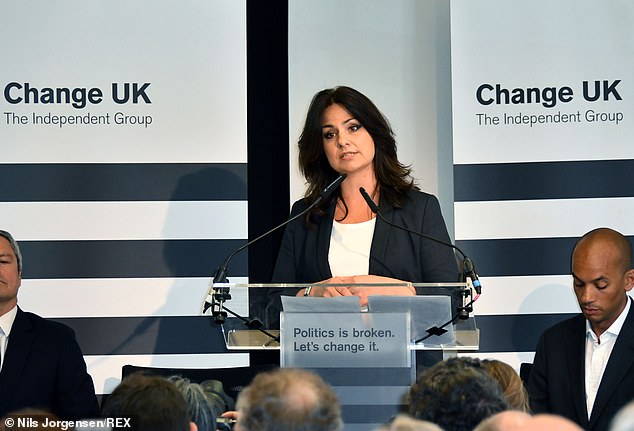 Pictured: Heidi Allen of Change UK takes part in a referendum in London on April 30th Guy Lambert said that Ms. Allen could easily have found the BBC's rules 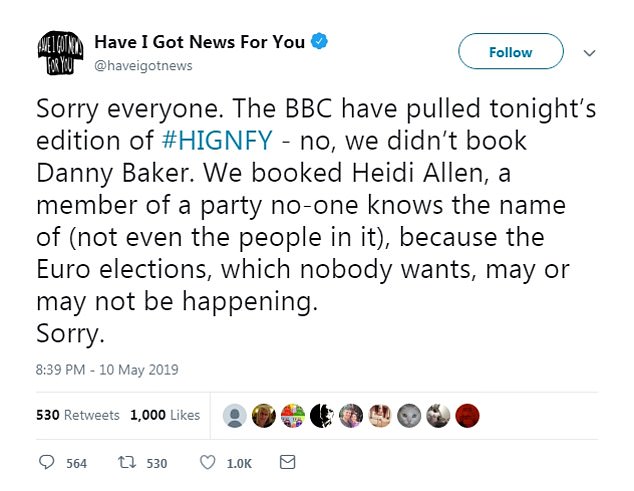 On the Twitter page "Do I have news for you?" The decision was announced and the following was published: "Sorry to everyone. The BBC released #HIGNFY today – no, we didn't book Danny Baker.

"Today we ask the BBC to look again and make sure that British voters are not doing bad service by giving some parties more favorable treatment than others."

The letter said: "I am writing urgently and in light of recent events for the BBC to find a fair and balanced approach to Change UK in its coverage ahead of the European Parliament elections on May 23rd.

& # 39; As the campaign coordinator for Change UK, I urge you to urgently review your decision to exclude our party from the BBC Wales election candidate debate to be held tomorrow (Sunday) morning.

"It is deeply unfair for your BBC Wales team to exclude Change UK in particular … and to restrict the debate rather than allow it." 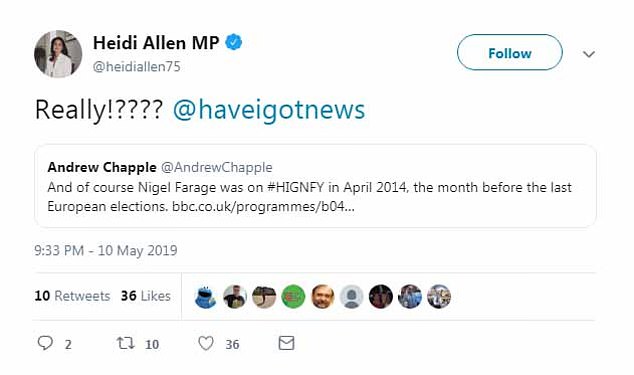 Ms. Allen expressed her outrage at the decision and replied to a tweet that featured Nigel Farage in April 2014 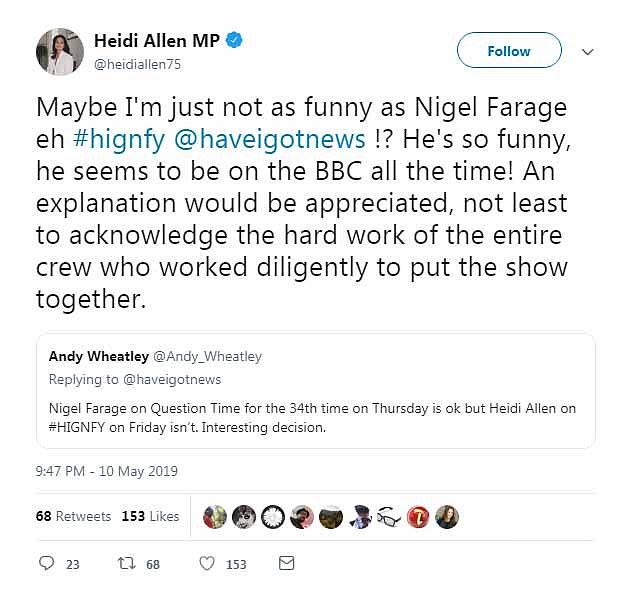 Ms. Allen herself expressed her concern and wrote: "Maybe I'm just not as funny as Nigel Farage, like #hignfy @haveigotnews !?" 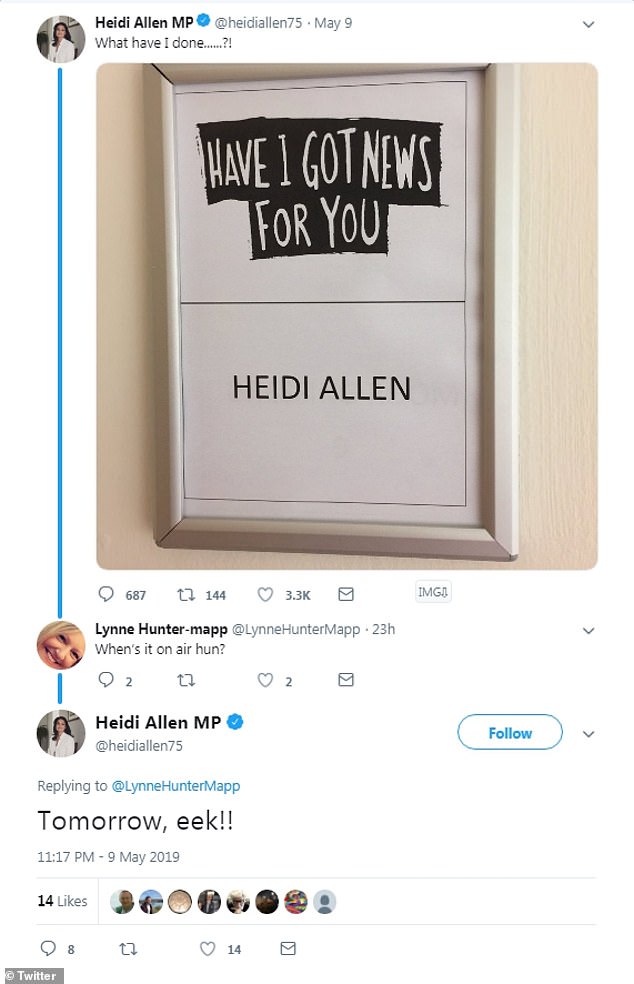 Ms. Allen had tweeted that she would appear on the program yesterday

It adds: "Your decision last night – about an hour after the scheduled broadcast – to end the Have I Got News For You screening with our interim director Heidi Allen has also raised serious concerns."

I am writing urgently and in the light of recent events for the BBC to find a fair and balanced approach to Change UK in its reporting to the European Parliament elections on May 23rd.

As Campaign Coordinator for Change UK, I urge you to urgently review your decision to exclude our party from the BBC Wales election candidate debate to be held tomorrow (Sunday) tomorrow.

It is profoundly unfair for your BBC Wales team to exclude Change UK in particular – when recent polls in Wales show that we are ahead of the LibDems, Greens and UKIP – and restricting the debate rather than allowing it. We have a number of candidates in Wales and across the UK, and I don't see how this can be a factor in the BBC's editorial guidelines. It is not too late to rethink this BBC Wales approach and to see your viewers show a fair representation of the candidates standing in the elections.

Your decision yesterday evening – within an hour or so after the scheduled broadcast – to stop the screening of Have I Got News For You with our interim director Heidi Allen has also raised serious concerns.

With regard to the Ofcom broadcast code (January 2019), paragraph 6.7, I would like to ask why you felt the need to pursue your approach to an apolitical light entertainment program that should be aired before the legislature.

Although Heidi is not a candidate in the European elections, I hope that the BBC hears its voice and that of other Change UK candidates and representatives – and does not continue to prefer Mr Nigel Farage in your reporting, who is not only a party leader but one himself Candidate.

I urge you to take a fair approach during this parliamentary term so that you can hear sensible voices from the center of British politics in your reporting.

The letter said: "The decision to take this program off the air is all the more bizarre as the BBC decided to have Nigel Farage take part in an issue of Have I Got on April 11, 2014 ahead of the May 2014 general election Enable News For You. & # 39;

It says: “Although Heidi is not a candidate for the European elections, I hope that the BBC will let her voice and that of other Change UK candidates and representatives be heard – and will no longer prefer Mr Nigel Farage in your coverage. Who is not just a party leader, but a candidate himself.

"I urge you to take a fair approach during this parliamentary term so that you can hear sensible voices from the center of British politics in your reporting."

On the Twitter page "Do I have news for you?" The decision was announced and the following was published: "Sorry to everyone. The BBC released #HIGNFY today – no, we didn't book Danny Baker.

“We booked Heidi Allen, a member of a party whose name nobody knows (not even the people in it) because the euro elections that nobody wants may or may not take place. We are sorry. & # 39;

The BBC said the episode would air "at a later date."

Despite the initial excitement about the show, some people also asked questions about Ms. Allen's behavior after the program was canceled.

A Twitter user, Guy Lambert, said Ms. Allen could have found out the rules and accused her of "playing with voters".

Ms. Allen, who left the Conservative Party earlier this year to join Pro-Remain Change UK, asked for an explanation for the BBC's decision.

"He's so funny, he seems to be on the BBC all the time! An explanation would be desirable, not least to acknowledge the hard work of the entire crew, who worked diligently to put the show together. & # 39;

Regarding the decision to pull the show, the BBC said: & # 39; The BBC has specific editorial guidelines that apply during election periods.

For this reason, it would be inappropriate to involve party leaders in entertainment programs during this short term, which does not allow for equal representation.

& # 39; So we will not broadcast the planned episode of HIGNFY with Heidi Allen, the director of Change UK. We will try to broadcast this episode later. & # 39;

When asked about the difference between Ms. Allen's appearance at HIGNFY and that of Mr. Farage at Question Time, the spokesman added: “The explanation refers to the appearance during entertainment programs during this short term, which does not allow for equal representation. 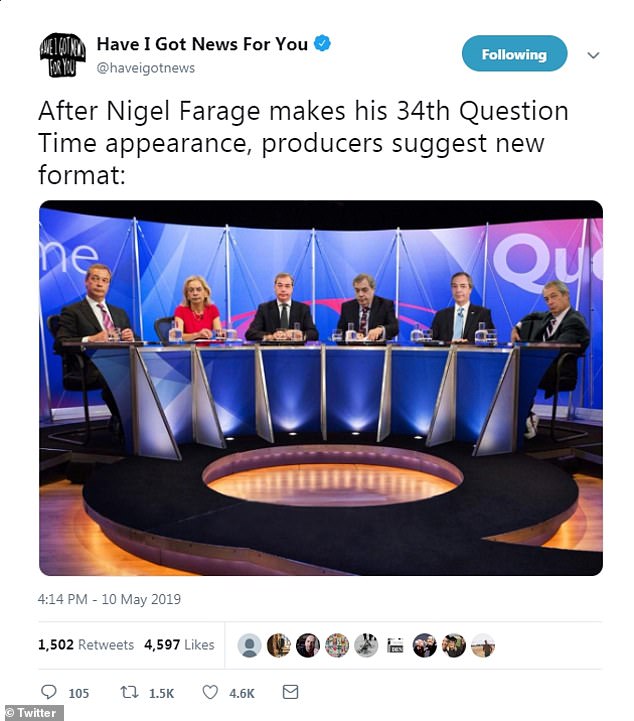 The Twitter page "Do I have news for you?" Was still published after the decision was announced

"Question Time is a political debate program in which representatives of various political parties take part."

First broadcast in 1990, 501 episodes of the panel show were broadcast on the BBC with guests from Grayson Perry to Boris Johnson.

In 2013, another episode of the program was at the center of an impartiality scandal before the independent Scottish referendum.

Ofcom and the BBC received over 100 complaints about anti-Scottish prejudice when Ian Hislop joked that Mars Bars would be the currency for an independent Scotland.

Guest presenter, English actor Ray Winstone, said: "To be fair, the Scottish economy has its strengths – its main exports are oil, whiskey, tartan and vagrants."

Older kings like Prince Charles, William and Kate have yet to meet Baby Archie
The president of the Bikinks gang from Finks is arrested on drug charges
Comment