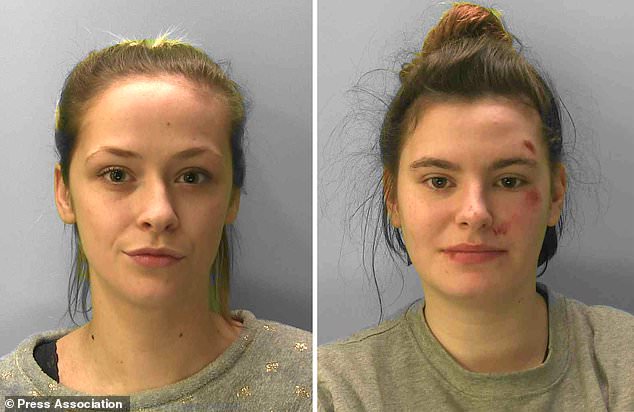 
Two women who attacked the police at a lockdown house party were detained after a clash involving an official who was at risk of coronavirus transmission.

Officers found roaring noise and drunken partiers when they arrived in some homes in Eastbourne, East Sussex in April.

But when they tried to break up the gathering, things got violent and a woman said to an officer, "I have corona, be careful."

The fight, which was seen in court for shocking Bodycam shots, spread into a hallway in which one of the officers doubled in pain after being hit by a stone object.

Two 21-year-old women pleaded guilty to attacking the police at the party and appeared before the Lewes Crown Court for sentencing.

Millie Robinson and Bayleigh Meadows, both of whom live in Eastbourne, were criticized by the judge for committing the offenses, while the rest of the country obeyed the blockade for the safety of everyone.

Prosecutor Ryan Richter said when the two police officers tried to break up the party on April 8, they encountered a "flood of ill-treatment".

He said they learned from the residents that they "had the right to be in each other's homes."

At some point Robinson turned to one of the officers and pursed his lips as if she was spitting on him. He said, "I have corona, be careful," the court heard.

When the tumult flowed into a hallway, Robinson landed on the floor and stepped out, catching an officer in the stab vest and leg.

At that point, Meadows took a stone-based toilet paper holder and threw it at one of the officers, pounding him in the head, the court heard.

He had a 2 cm cut and a huge lump on his head that had to be glued back together, the court was informed.

In a statement read in court, he described the fight as "a quick and surreal moment".

Robinson defender Rebecca Upton said that she found the lock to be "extremely hard" and felt "extremely isolated", which had worsened her mental health.

She said, "Unfortunately, she has taken on the task of feeling better by drinking a lot of alcohol."

Ms. Upton said Robinson was desperate at the scene and immediately showed remorse and asked that she be given a suspended sentence.

Adam James, who represented Meadows, argued that the church was "not a party but an assembly".

He said Meadows has underlying mental health problems and only a "limited" memory of what happened.

Judge Christine Laing QC condemned the couple and said, "This matter occurred just two weeks after the government's curfew to stop the spread of Covid-19, a deadly pandemic."

Looking at her previous beliefs, she found that violence against police officers had occurred in the past and that "they had rejected much of the opportunities that were given to you".

Judge Laing added: “Police officers have to take risks every day to protect the public, perhaps never more than during a pandemic.

"You shouldn't have to deal with behaviors like we've ever seen."

Robinson from Edgeland Terrace pleaded guilty to earlier charges of two charges of assault on an emergency worker.

She was detained for six months.

She was locked up for 12 months.