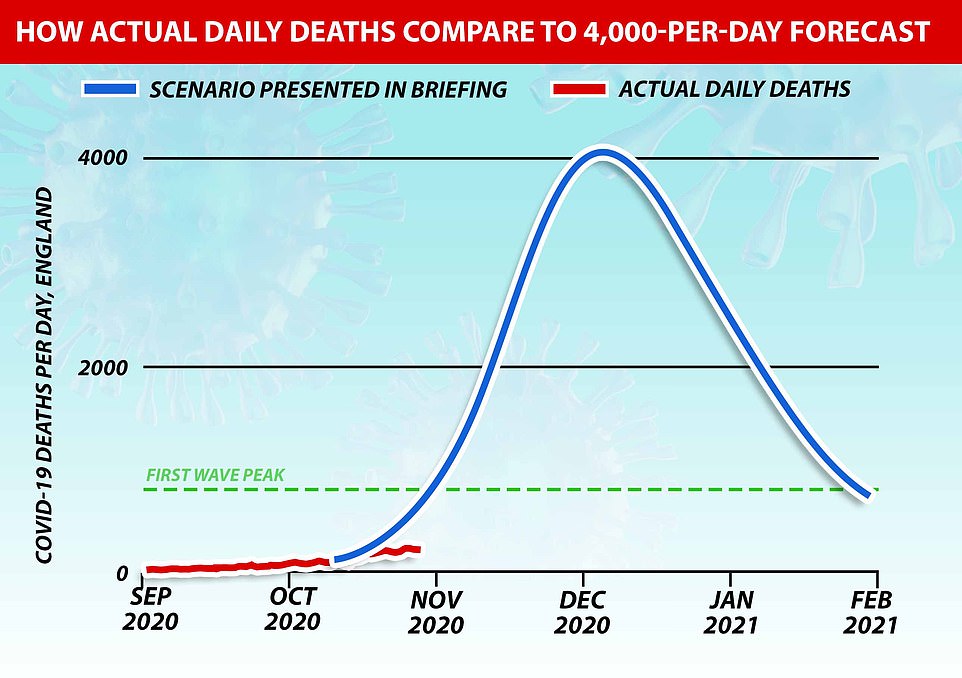 
Claims that 4,000 people could die from coronavirus by next month could be four or five times too high and not reflect the current situation, experts warn.

However, there are concerns that it is out of date and inaccurate. SAGE is accused of misleading the public and MPs by selecting the scariest dates.

Professor Carl Heneghan of the Center for Evidence-Based Medicine at Oxford University said he "couldn't understand why they used these data".

The forecast could be four or five times too high, he said, given that the UK currently has an average of 1,000 deaths per day. In reality, according to the Ministry of Health, the daily average on October 22nd and 28th was 182 per day.

The number that appeared as the worst case on a graph with three other possible scenarios was created by statisticians from the University of Cambridge and Public Health England, who have since revised their numbers and reduced the possible number of deaths. The team's predictions are not published online like some of their other work, but rather sent directly to SPI-M, a subgroup of SAGE, to do with what they choose.

The potential 4,000 deaths per day if no changes were made to the restrictions were almost double the second worst case, making them more than 2,000 per day.

The lowest estimates in the no-action scenario put deaths at just under 2,000 per day, and all were higher than the high in the first wave, when the most deaths were recorded on April 8 (1,073).

The 4,000 deaths per day scenario was based on the assumption that there would be 1,000 per day in early November. The actual number of people dying is significantly lower. An average of 182 were confirmed per day in England and 162 across the UK yesterday 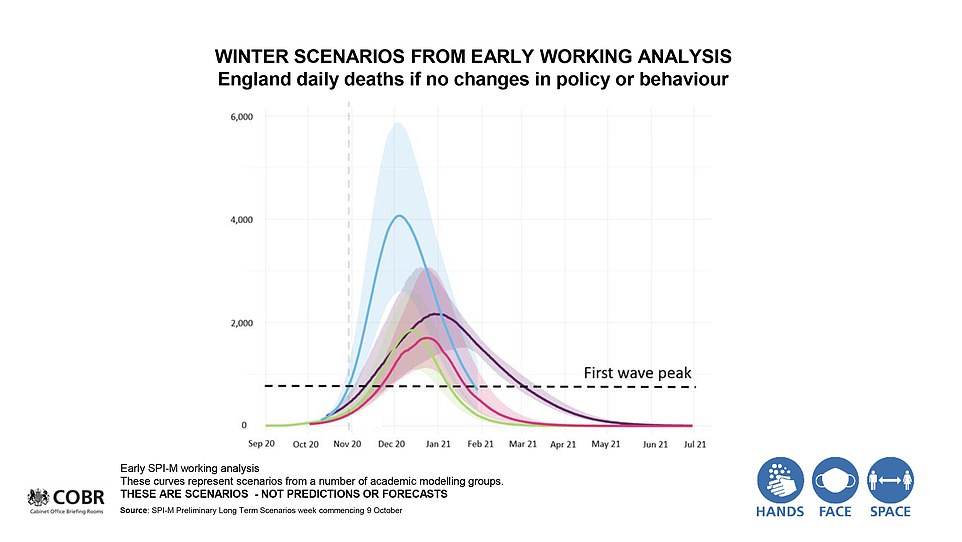 This slide, shown on live television on Saturday, shows a forecast of deaths, which will reach 4,000 a day by the end of December (blue line). However, experts are concerned about the decision to include this as it is based on old data that has since been updated 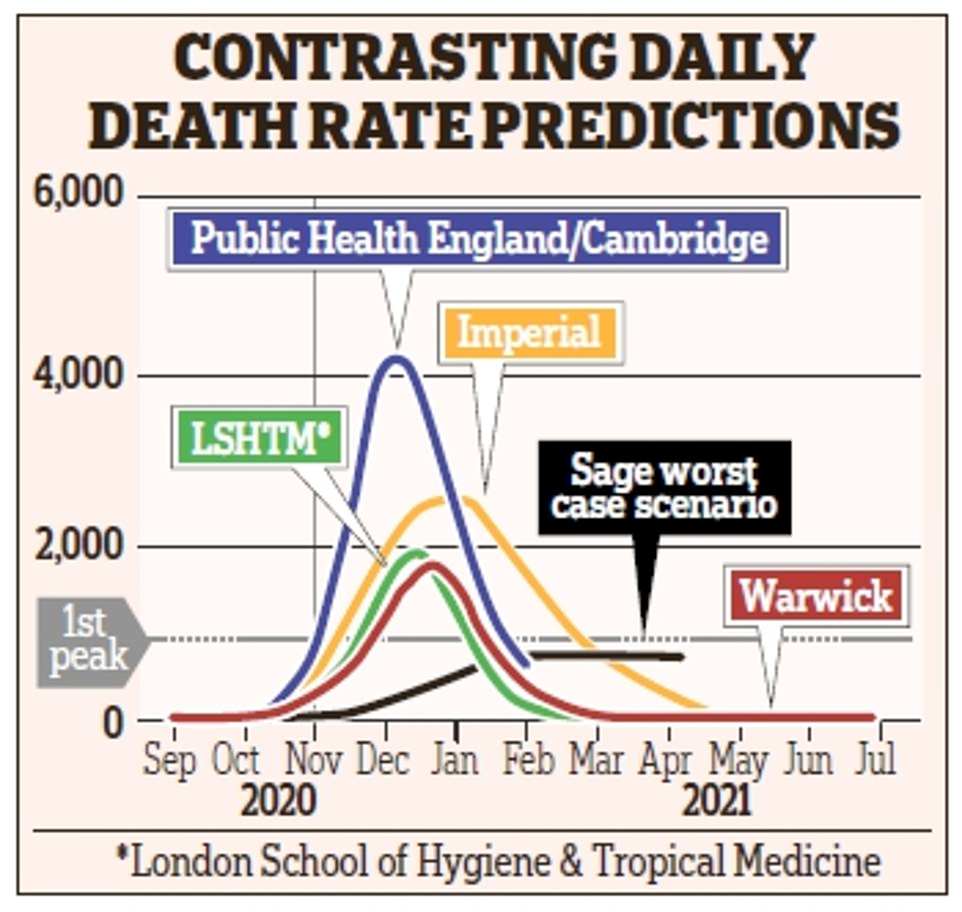 Professor Heneghan told The Telegraph, “Our job as scientists is to reflect on the evidence and uncertainties and to provide the latest estimates.

"I can't understand why they used this data when there are far more recent forecasts from Cambridge that they could have accessed that show something completely different."

In a blog post, Professor Heneghan and Dr. Dan Howdon, a medical researcher at the University of Leeds, said the project that made the estimate of 4,000 a day has since been updated and the numbers downgraded twice since then.

It's based on an estimate of 1,000 deaths a day on November 1st, but really only 162 were announced yesterday.

In alternative scenarios in Sir Patrick's chart, deaths on November 1 were 486, 266, and 234 – all significantly lower.

Professor Heneghan and Dr. Howdon pointed out that the Cambridge Forecast has been updated more than once since the version used in the meeting.

They wrote, “Since the first fall update on October 12th, two subsequent updates have significantly reduced the estimated number of deaths.

"This latest update will run until November 15th, when 497 deaths are forecast."

The graph presented by the Chief Scientific Advisor in the briefing indicated that deaths could peak in late December, but the updated model doesn't go that far into the future.

However, the trajectory means that the death toll is only a quarter of the forecast of 4,000 per day.

Professor Heneghan therefore said the 4,000 a day could be up to five times too many and that more accurate, lower estimates will be available before the briefing on Saturday.

He told The Telegraph: “I am deeply concerned about how the data will be presented so that politicians can make decisions.

"It is a rapidly changing situation that is very different in different regions and I am concerned that MPs who are about to vote are not getting the full picture."

Conservative MPs said they were concerned the projections were "misleading".

David Davis told the newspaper, “The government's scientific advisors' primary responsibility is to tell the public the truth, not to seek out the data.

"This is a pretty serious mistake after using old data that is effectively misleading the public."

And Steve Baker added, "This evidence seems to suggest that the death models are already wrong and by a considerable margin." 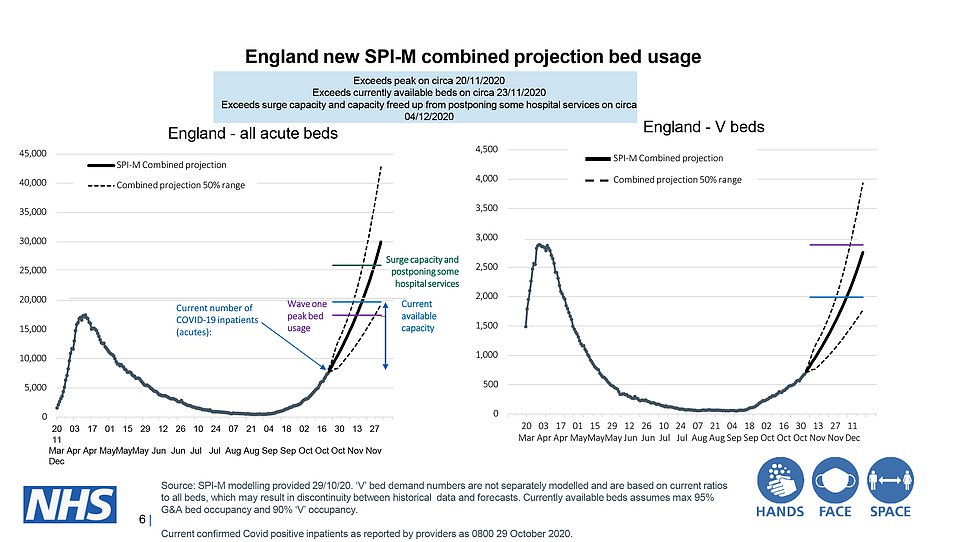 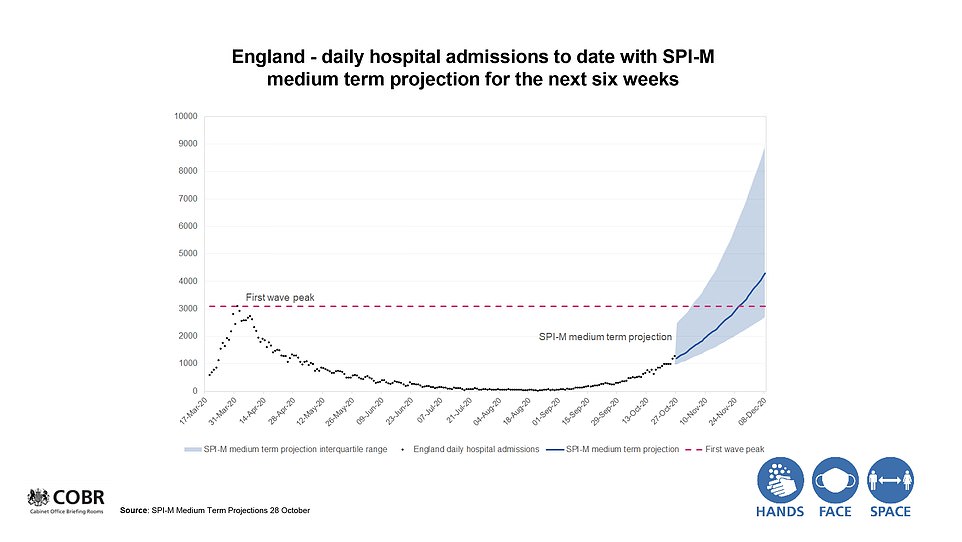 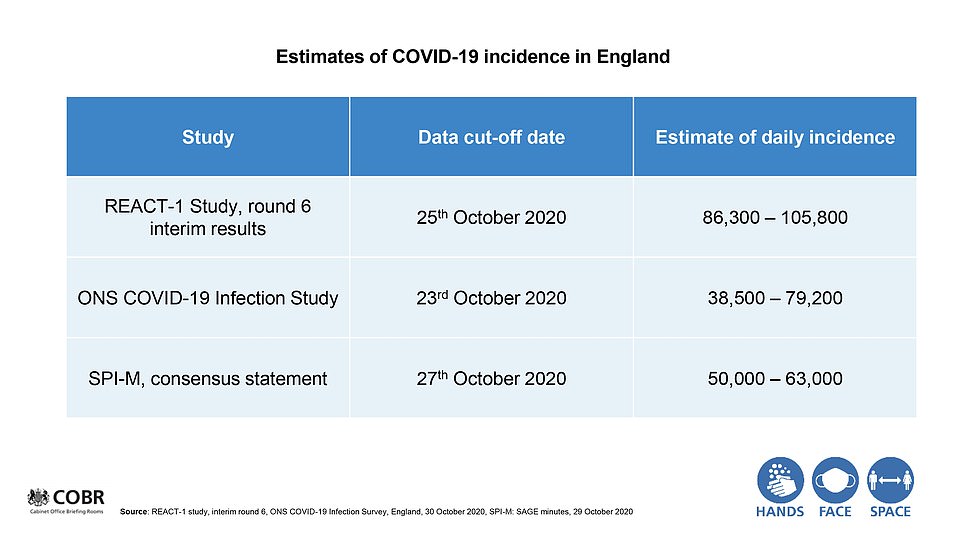 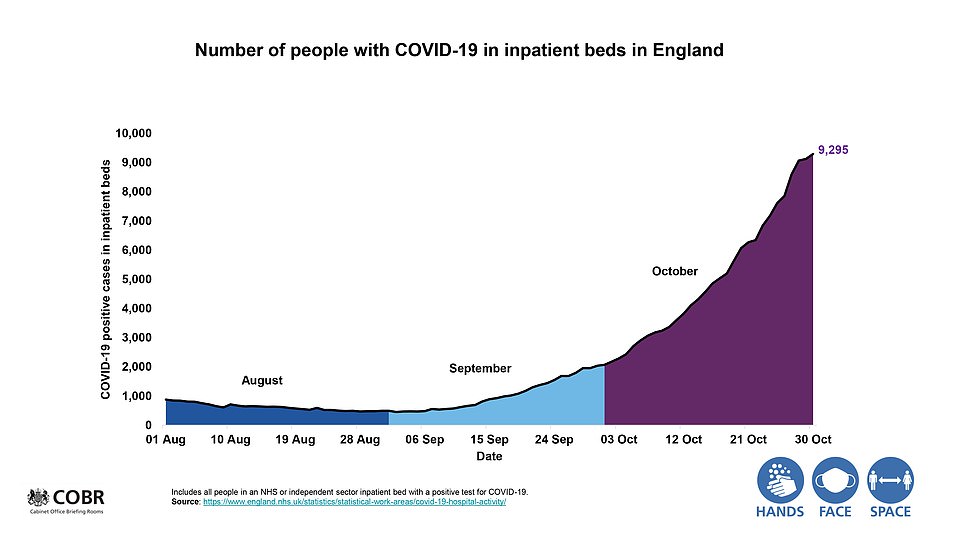 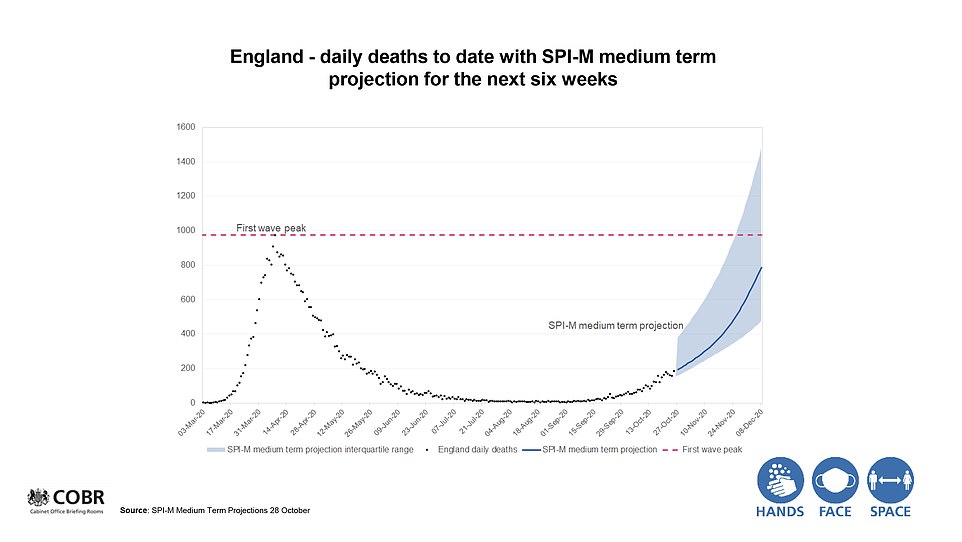 Questions were first asked yesterday about the dossier that stalled England with its dire forecast of 4,000 deaths a day.

It is believed that Cambridge University's projection, coupled with Public Health England (PHE), drastically changed the thinking of Downing Street.

Boris Johnson will seek today to counter a growing Tory revolt against his nationwide lockdown by warning that coronavirus deaths this winter could double the amount of the first wave.

The Prime Minister will be using a statement to the Commons this afternoon to say that there is "no alternative" than to impose four weeks of blanket restrictions across England to tackle the resurgent virus. 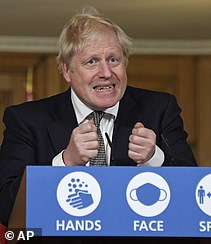 Mr Johnson will seek to reassure MPs that he will attempt to loosen the curbs and return to the localized tiered system on December 2nd after Michael Gove suggested yesterday to extend the lockdown.

Rishi Sunak tried this morning to reassure angry Tory backers by insisting that lockdowns end legally at this point.

He said the "hope and expectation" was that by then the virus would be at low enough levels to loosen the curbs, although he admitted they would continue to be checked.

Cabinet ministers, however, warn privately that the lockdown could last into next month if hospital stays remain high and that "all bets are closed" at Christmas.

Sir Keir Starmer has said Labor will vote with the government, which means the lockdown will likely sail through the Commons.

But the prime minister has come under fire from his own side and will face fierce opposition from Tory hawkish backbenches as they prepare for rebels.

Sir Graham Brady, chairman of the powerful 1922 committee, headed the MPs backlash, telling the BBC's Westminster Hour last night: “I think the aspect of lockdown restrictions that bothers me most would be the level of interference with what we usually see as basic human rights; Freedom of association, the right to family life, the government is already telling us who we can sleep with or not, depending on whether they are in an established relationship or not.

“If such measures were taken in a totalitarian country around the world, we would denounce them as a form of evil. And here the abolition of the fundamental freedoms of the people proceeds almost without comment. & # 39;

The documents uncovered by the mail show that the Cambridge model uses a time frame that is twice the official PHE death toll per day.

This could explain why the Cambridge / PHE death rate was so much higher than the others. No one was available from Cambridge to comment last night.

The Ministry of Health also declined to release the official report.

But last night, PHE said their model is one of "many" that will be sent to the Scientific Advisory Group on Emergencies (Sage), and that these models can be "wide-ranging."

Of the many slides presented at the press conference, the most surprising one was the graphic titled “Everyday Death in England Unless Changes in Politics or Behavior”.

It revealed predictions from institutions like Imperial College London, Warwick University, the London School of Hygiene and Tropical Medicine, and Cambridge.

The Cambridge projection suggested England's daily death toll could reach 4,000 in mid-winter – much more than at the height of the first wave.

Imperial was forecasting around 2,700 deaths a day and other institutions gave estimates below 2,000.

They all stated that Britain was on the way to a higher death toll than predicted in a reasonable planning of worst-case scenarios.

The Cambridge and PHE estimate far exceeded the 800 deaths per day projected by the Sage Committee of Experts.

It is believed that these models were included in a document presented to Downing Street last week by scientific advisors that contributed to the lockdown.

Charles Walker, MP for Tory, said: “If SAGE does not publish this document, it will be extraordinary that SAGE scientists will fall over themselves to speak on television and radio about their work and the importance of implementing the UK's a deep freeze.

"It goes without saying that all information that is used to support the blocking should be made publicly available."

Speaking at the press conference on Saturday, Sir Patrick Vallance said, “Different groups have different answers depending on the model, but what is clear by all when it comes to winter deaths is the potential for this to be twice as bad or more than the first wave. & # 39;

Other scientists have come up with more conservative estimates. James Naismith, Director of the Rosalind Franklin Institute and Professor of Structural Biology at Oxford University, said: “We don't yet know how many infections have just ended each day this week, but it is very likely that they are over 60,000 infections per day.

"Based on these numbers, we should expect, and not be surprised, that the death toll will climb to around 500 a day over the next three weeks until the new measures go into effect."

Yesterday the government announced that within 28 days of testing positive for Covid-19, another 162 people had died, bringing the total to 46,717. 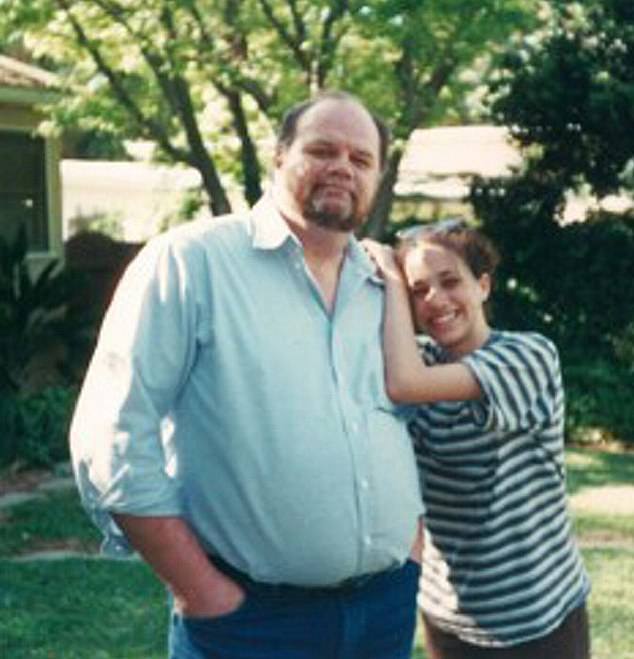 Coronavirus: Ministers warn that all bets are closed at Christmas
Graverobber, who stole girls' corpses for his "doll collection", refuses to apologize to their parents
Comment