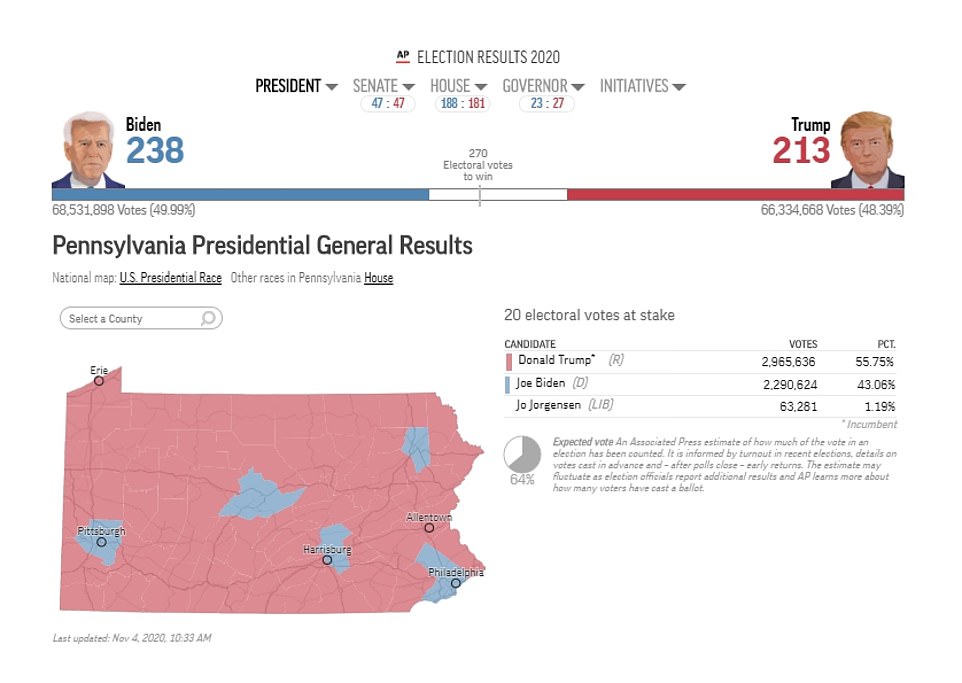 
Pennsylvania is being closely watched as the fate of the presidency could be attributed to the state.

But Governor Tom Wolf said "we may not know the results today," and tweeted that there were more than a million ballots left that could take until Friday.

Edison Research, published by the New York Times, has estimated that 75 percent of the votes were counted – 5,392,682.

Edison Research, published by the New York Times, has estimated that 75 percent of the votes were counted – a number of 5,392,682 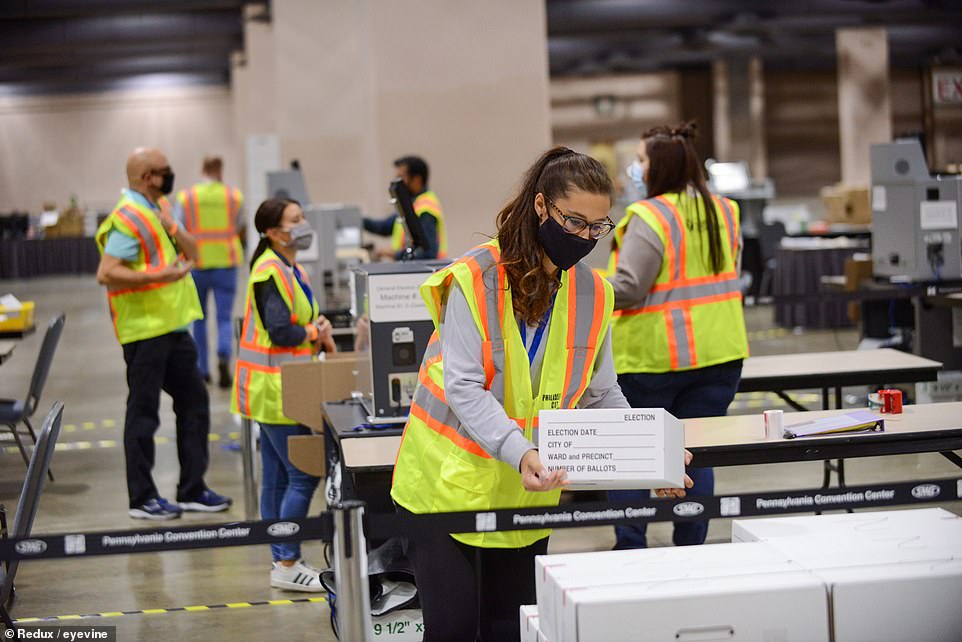 In states like Pennsylvania, where postal ballots are not counted until election day, the first results speak in favor of Trump, as postal ballots were counted more slowly.

A Republican appeal is pending in the Supreme Court as to whether Pennsylvania can count votes received in the mail Wednesday through Friday.

Winning Pennsylvania and another major state would give Mr. Biden the 32 votes required to pass the 270 threshold required by the electoral college.

Wins in Georgia, Alaska, North Carolina, Pennsylvania, and Michigan, all of which voted for him in 2016, would give Mr. Trump an additional 70 votes, bringing him to 283 votes.

A victory in those states and in Wisconsin, but a defeat in Pennsylvania would result in a narrow victory for Mr Trump with 273 votes.

Democrats hope that women, blacks and Latinos in Pennsylvania backed Biden in the presidential election – despite voting for Trump in 2016.

Biden will be hoping for a large turnout from blacks and Latinos in metropolitan areas like Philadelphia and Pittsburgh.

In the meantime, the president has come to rely on the support of predominantly white rural people. Governor Wolf last night urged residents of the crucial swing state to keep calm and be patient.

He prepared for the riot on election night, given the state's policy of postal voting, where final results may not be known until next week.

Wolf posted a short one and a half minute video on election day urging the Pennsylvanians to "take a breath."

He said, “Dedicated district workers across the state are ready to work tirelessly to make sure all votes count.

"But counting that enormous number of ballots is going to take more time than we are used to."

He added, "The most important thing is that we have accurate results – even if it takes a little longer."

The Democratic governor has received immense fire from critics in recent months for his coronavirus restrictions and bans. 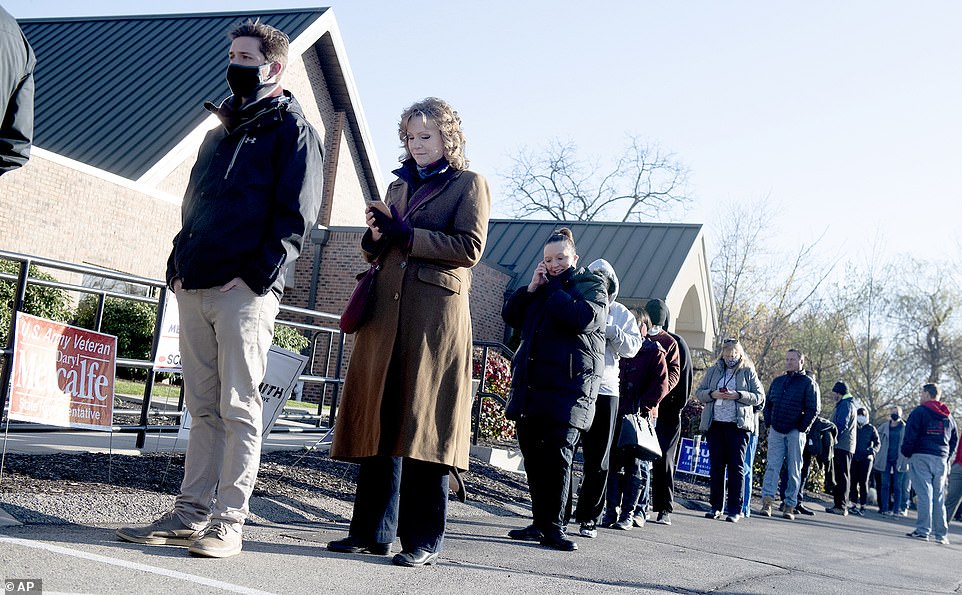 "We may not know the results today, but I encourage all of us to take a deep breath and be patient," said Wolf on his video as thousands of Pennsylvanias went to the polls Tuesday to cast their ballots

Republicans in the state were handed a loss by the Supreme Court when they challenged the new state rule that allows electoral officials to accept and count postal ballots received up to three days after the election – provided that it is postmarked for November election day 3.

This year – in view of the coronavirus pandemic – a record number of more than 100 million voters cast their votes early or in person by post.

Pennsylvania Democrats argue that it will take electoral officials the extra days to count the mail-in ballots this year.

Republicans claim that any ballot papers received after election day should be void. Trump claims the move is an attempt by the Democrats to "steal" the elections.

Keystone State has 20 Electoral College votes and, along with Florida, is one of the most critical states for Trump to win re-election.

Wolf said in his video message: "I believe the coming days are our moment to shine and we will do it as a state that is united when we count every vote."

Trump hit the Supreme Court ruling, claiming he would have legal challenges against Pennsylvania's outcome if those change in the days after election day when the postal vote is counted.

He said the results should be known by Tuesday evening.

On a visit to his campaign headquarters in Arlington, Virginia, he said, “I think the Supreme Court ruling on Pennsylvania was unfortunate because I think we should know what happened that night. 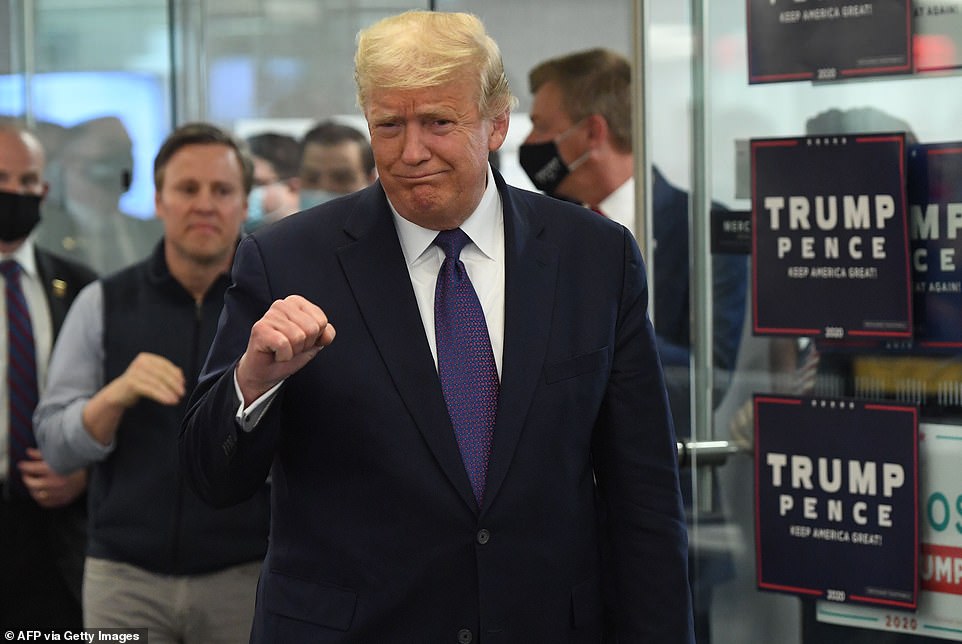 Trump railed against Pennsylvania's policies on Tuesday, claiming it was a way for Democrats to "steal" the elections: "We should have the right to know who won on November 3rd."

"Let people put their ballots in earlier," he suggested mail-in and postal voting.

“But you have to have numbers, you can postpone these things for many days and maybe weeks.

"You have to have a date, and the date happens to be November 3rd," the president repeated. "And we should have the right to know who won on November 3rd."

Although winners are not officially named on election day, media projects are usually accurate enough to predict the winner – and a concession and victory speech is usually given on election night.

However, this year everything is in the air.

The election results could take weeks as Trump threatened to question the legal validity of the results in Pennsylvania which, depending on the proximity of the race, could determine the winner.