The family of a victim of a terrorist attack in the fishmonger hall is suing the government for his death.

Jack Merritt, 25, and Saskia Jones, 23, were fatally stabbed to death by an unlicensed Usman Khan on November 29th last year at a rehabilitation event near London Bridge.

Khan, 28, attended the event organized by Cambridge University's Learning Together program. Armed with two kitchen knives wearing a counterfeit suicide vest, he killed Mr Merritt and Ms. Jones before being shot by police.

Mr Merritt's parents, Anne and David, as well as his brother Joe and girlfriend Leanne O'Brien are now taking legal action against the Justice Department and the Home Office in the High Court.

Her attorney Kate Maynard said Khan was a convicted terrorist under public protection by multiple agencies when he killed Mr. Merritt and Ms. Jones, raising "questions about assessing and managing Usman Khan's risk."

Ms. Maynard, partner at Hickman and Rose, said "When government agents or public authorities have caused or contributed to death by their acts or omissions", the right to life is claimed under the European Convention on Human Rights.

Jack Merritt, 25, died after the terrorist attack during a prisoner rehabilitation event near London Bridge on November 29th last year

She added that the Merritt family had "no alternative" but to bring their case this week just before the one-year deadline for claims under human rights law to "protect their position".

Ms. Maynard said that "all the relevant public bodies legally represented in the investigation" had a "standstill" with the family – with the exception of the MoJ and the Home Office, which "unfathomably" disapproved.

Ms. Maynard said families "usually" reach an agreement with public authorities against which they can take legal action "so that the case should not be seriously considered or waived until after all investigations, including an investigation, have been completed".

She added that such civil cases are "often" resolved after an investigation "without the involvement of the courts".

However, Ms. Maynard said: “In this case, all relevant public bodies that were legally represented and contacted in the investigation agreed to a limitation period of one year, with the exception of the State Secretaries for Justice and the Ministry of the Interior.

"Unfortunately, the family had no choice but to focus on protecting their position through legal proceedings at a time when they were otherwise focused on celebrating Jack's life on the anniversary of his death."

Last month, a court heard that the Prevent team handling the attacker at the fishmonger hall had "no special training" in dealing with convicted terrorists.

At a pre-investigation hearing, Mr Merritt's family lawyer Nick Armstrong suggested that there was already evidence of a "systemic problem" as "all of the Staffordshire prevention officers" said they had "no specific training in dealing with terrorist offenders ”. 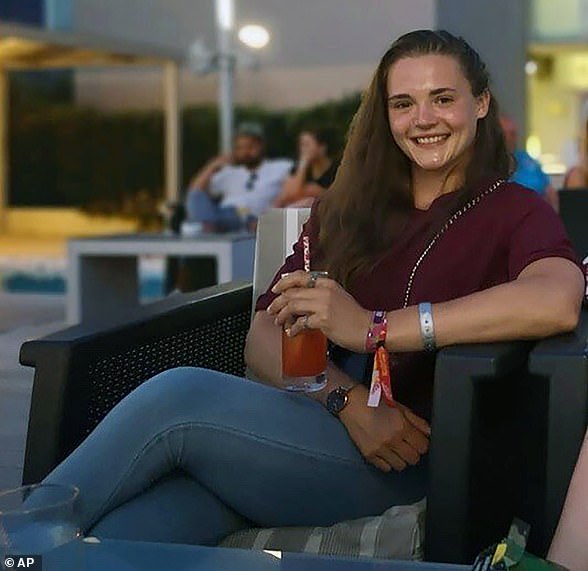 Saskia Jones, 23, died in a terrorist attack on London Bridge after convicted terrorist Usman Khan raged with a knife

He told the court that the surveillance of Khan "has been turned over to the Staffordshire Unit by the West Midlands Counter Terrorism Unit for reasons that remain to be investigated and all say they have no specific training".

Henry Pitcher's QC for Ms. Jones' family pointed out that Khan had been classified as the "highest risk" and had 22 licensing terms upon his release.

Mr Pitchers told the court, “We know he was a convicted terrorist. He had been out of jail for less than a year when this attack took place.

“We know and it is not denied that he was supervised and also supervised by the probation officers and the relatively frequent contact with him.

As far as I know, prior to his release he was examined by the police, released and classified as the highest risk.

“Given the evidence we've seen, his last unannounced visit from police officers was … About two weeks before the attack.

“You arrived around noon and found the apartment to be dark. You see, Mr. Khan wasn't happy that they took photos of his X-Box games and he asked to speak to a lawyer. He asked them to go what they did. & # 39;

Mr. Pitchers asked if the Prevent Team or Parole should have suspected the imminent danger that Khan posed. He was convicted of being part of an al-Qaeda-inspired cell that planned to blow up the London Stock Exchange and kill Boris Johnson in 2012.

The assassination of the leading Iranian nuclear scientist "involved 62 people, including 12 armed men".
The hotel, restaurant and bar have meals and drinks that you can have delivered (including Christmas dinner).
Comment