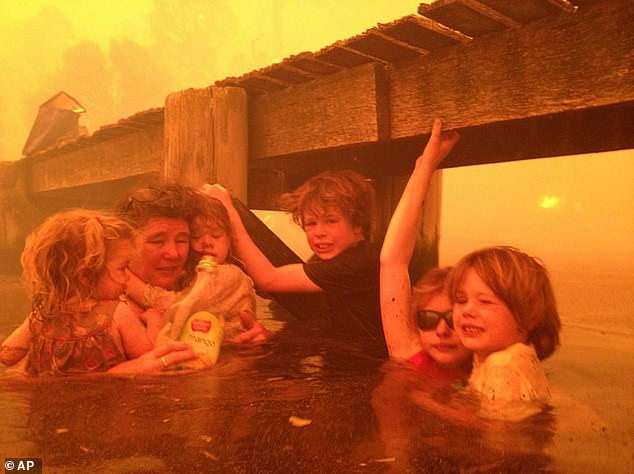 
Hundreds of Tasmanians who were hit by a devastating bush fire in January 2013 have taken legal action against two people who they believe caused the fire.

The fortnightly fire in Dunalley, southeastern state, destroyed 193 homes and 186 other properties, including the city's school and police station.

Documents filed with the Hobart Supreme Court allege that a man and a woman neglected or did not properly extinguish a campfire that would later blaze and burn on 25,000 hectares of land.

A total of 445 people have included their names in the lawsuit.

They claim that on December 28, 2012, a campfire was lit in a stump on a property in Forcett.

Tammy Holmes, second from left, and her grandchildren, two-year-old Charlotte Walker, left, four-year-old Esther Walker, third from left, nine-year-old Liam Walker, eleven-year-old Matilda, second from left to right, and six-year-old Caleb Walker, right , escapes under a footbridge while wildfire rages nearby in the Tasmanian town of Dunalley during the forest fires in 2103

It is believed that dirt was stepped on the stump and two half buckets of water were poured onto the fire, assuming that it had been extinguished.

The woman on January 1st saw steam coming out of the tree stump after the rain, but took no steps to investigate.

Two days later, in hot, dry and windy weather and when the risk of fire was very high to severe, the smoldering fire spread to grass and then to scrubland.

The class action lawsuit claims the man and woman should have known when they lit the campfire in December that there was a risk of fire spreading across a wide area.

An investigation of the Dunalley bushfire and other flames in the region in 2013 estimated the total financial cost to be approximately $ 100 million.

The case is reportedly to be heard in the Supreme Court in March.

The devastation of the fire was captured by a British-born grandfather who led his family into the sea when wildfires raged around them and destroyed their home. 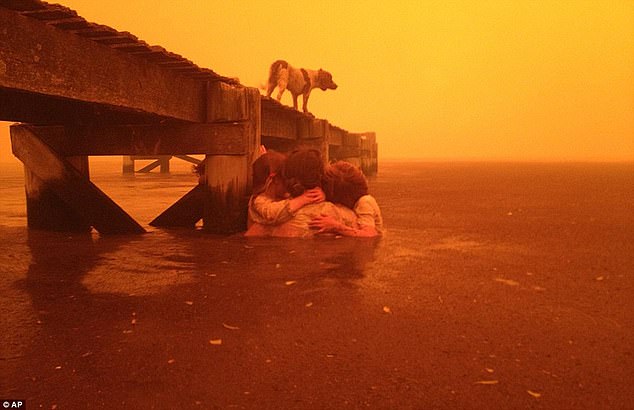 The torture near the village of Dunalley in Tasmania was photographed by 62-year-old Tim Holmes, who moved from Wales to Australia

The torture near the village of Dunalley in Tasmania was photographed by the 62-year-old Holmes who had moved from Wales to Australia.

"We saw fire tornados coming, and next we knew everything was on fire, everywhere and everywhere around us," said Holmes.

"At that point I had sent Tammy with the children to go to the jetty because there was no escape, we couldn't get out."

The children's mother, Bonnie Walker, whom she had left in her parents' care on Monday, feared that they had been killed.

Mrs. Walker told how she went to worship in Hobart, Tasmania, when fire devastated the country on both sides and just barely made it before the flames crossed the street and separated her from her family.

About 1,000 people were rescued from the east coast by boat after fires cut off the streets. However, police say they have "serious fears" for a number of residents who have stayed to defend their homes, but have not been heard of.