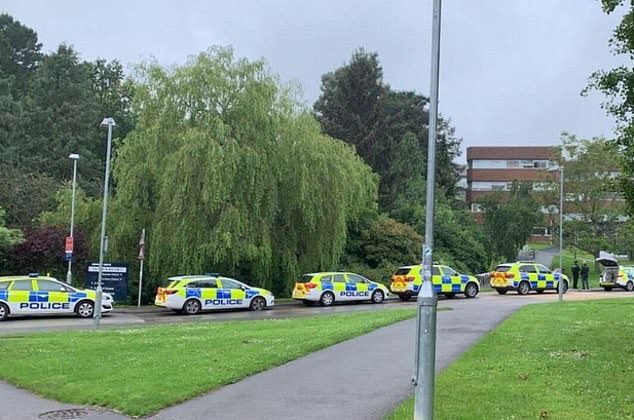 A 25-year-old student was arrested after allegedly threatening others with a gun at a British university.

A man has been arrested and the police are currently investigating the weapon. Officers believe it is an imitation firearm or a pistol with an empty shot.

The students revealed how several police cars raced to the scene when armed officers and a dog unit evacuated buildings.

Katie, 21, said: “Around 12.20pm there were police officers outside the Amory building with guns and shields. There was someone in handcuffs. & # 39;

& # 39; The Old Library, Reed Hall, Innovation Center and Business School were closed. The Amory was evacuated, but the forum was not affected at all. The students were left behind 15 minutes ago. & # 39;

Another student, who claimed that some people had been pulled out of an exam to be evacuated, added: “It was a man with a gun.

"I was in the cafe, but some people were still in the exam because they had extra time, so they were pulled out.

One student said, “It happened around 12 noon. I saw five police vehicles outside the Amory building. They wore bulletproof vests.

& # 39; The building was closed and the students evacuated. They also evacuated some of the nearby buildings, such as Reed Hall and the old library, business school, and innovation center. Around 12.25 p.m. a man came out with the police.

At that point, I would say that there were about seven police cars. I heard no shouting from the police, they seemed to go in pretty quickly and sort it out. There are still a lot of people on campus.

“The exams are over, but there are still some, mostly postgraduates. The Amory building is like a large study center for people who don't want to use the library. Mostly law students. & # 39;

A police spokesman said, "The police called shortly before 11:30 this morning (Wednesday, June 19) to report reports of a man suspected of having a gun on the campus of the University of Exeter.

The units immediately visited the scene and were able to identify a specific room in the Amory building, in which probably only a few people lived.

To investigate and protect the public, students and staff, two firearm officers and a police dog quickly entered the building.

A man came out of the room, identified himself and was arrested without incident.

The officers then found a bag in which they found a metal gun. Although further research and searches are being carried out, the first examination of the item shows that it is not a usable firearm, but is either a replica or a handgun. It was not loaded.

Superintendent Matt Lawler, police commander for Exeter, East and Mid Devon, said: “We are not looking for anyone in connection with this incident, and nobody in the university or larger community should be concerned about their continued security.

“While we have posted a number of officers on the ground for obvious reasons, we have now withdrawn armed officers, and local staff will investigate, including searches and testimony, during the day.

"We are very grateful to Exeter University staff and students for their collaboration and calm response."

A 25-year-old Exeter man was arrested on suspicion of owning a gun. He was taken into custody on Heavitree Road in Exeter and will be interviewed later today. & # 39;