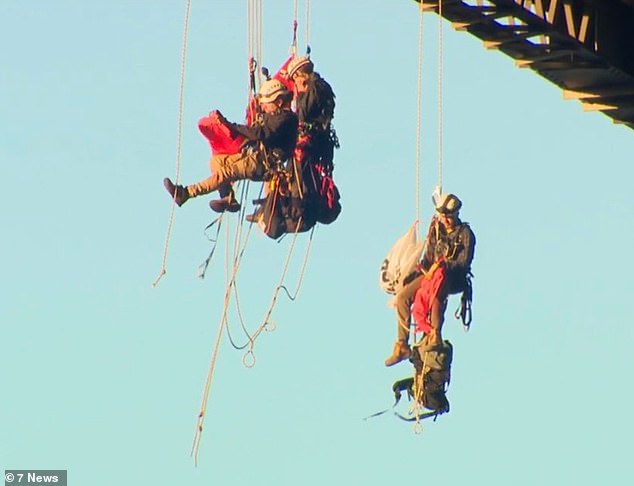 
Three Greenpeace activists dangled precariously on ropes under the Sydney Harbor Bridge during a protest against climate change on Tuesday morning.

The men dangled a few hours before they settled down on police boats and were arrested.

The men, whom Greenpeace said were experienced and trained abseilers, wielded ropes 49 meters above the water.

They started the protest around 6 a.m. – saying they would not come down until the government declared a climate change emergency.

Police said the men were arrested at 9:45 p.m. and charges are expected. 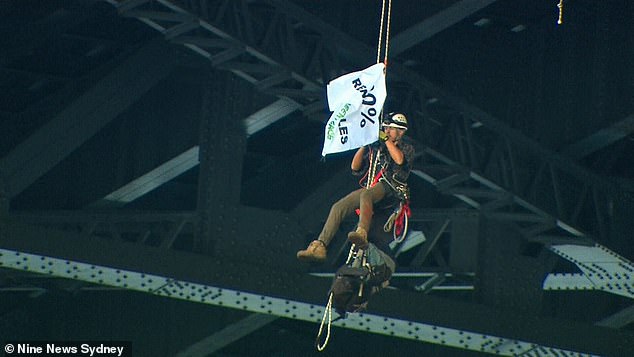 A protester dangled above the water with a sign that said "100% renewable". 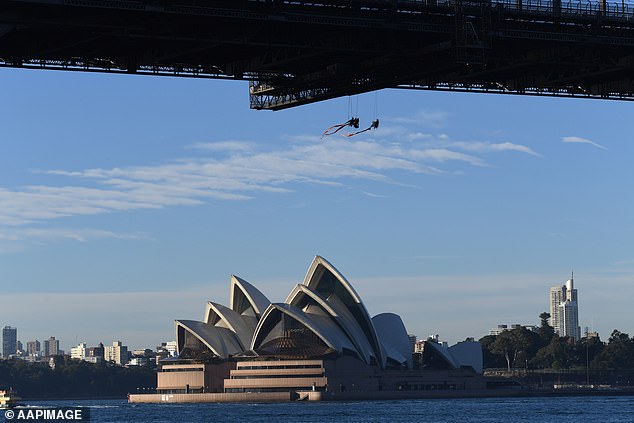 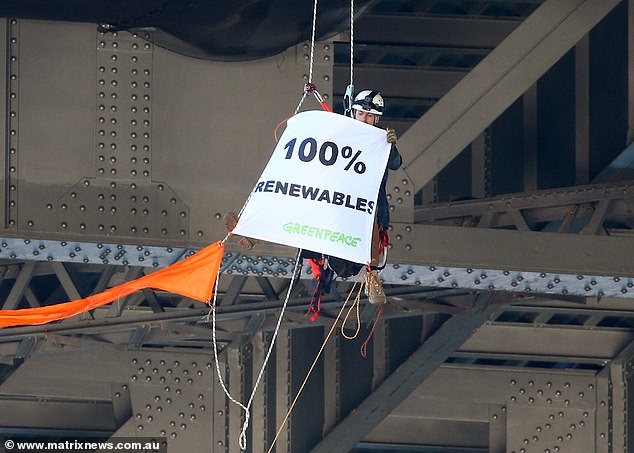 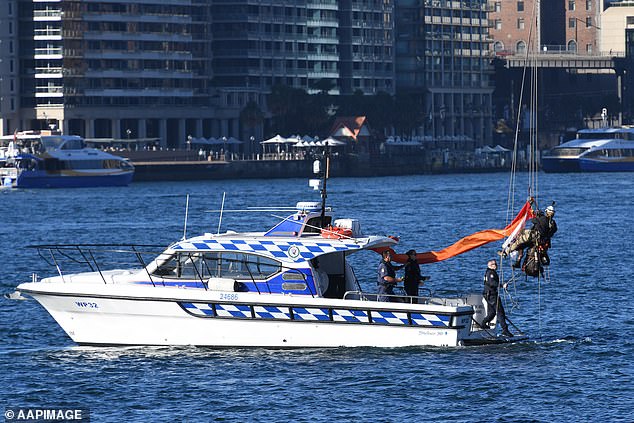 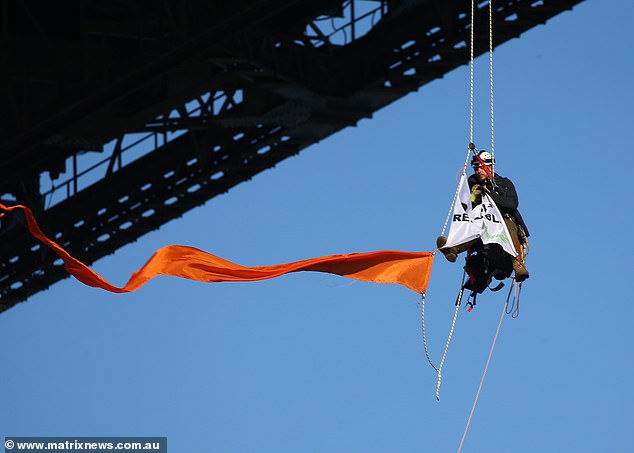 A group of activists stormed the bridge around 5:15 a.m. Pictured: one of the abseilers

A group of activists stormed the bridge around 5:15 a.m.

Some were arrested by security officers who called the police, but three avoided detention and continued the planned protest.

According to the police, ten activists were initially arrested, some with belts and abseiling equipment.

According to the police, some of their equipment bags fell into the water.

Police boats in the water and officials on the bridge considered how to get the other three men down before they lowered themselves and ended their protest.

Lane eight of the bridge was temporarily closed due to the police operation, but was soon reopened.

Climate change was a key issue in the campaign, in which Labor leader Bill Shorten criticized the coalition government for inaction. 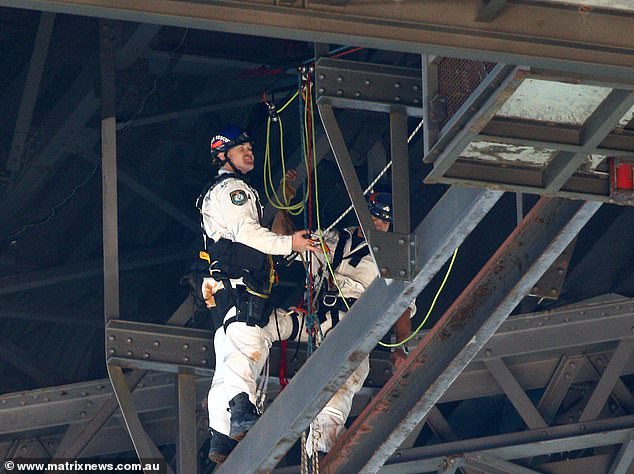 Police rescuers (pictured) were on site trying to arrest the men 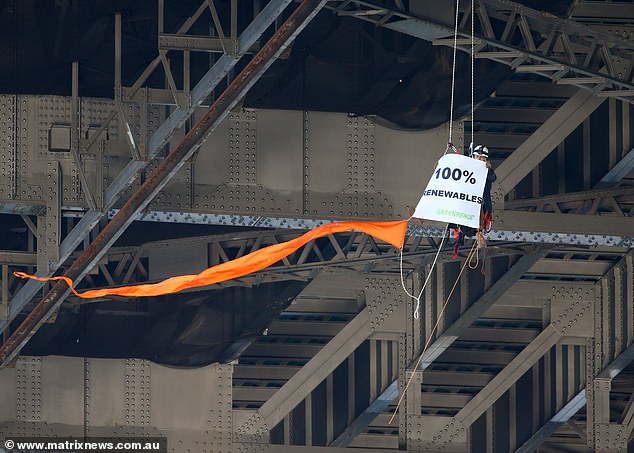 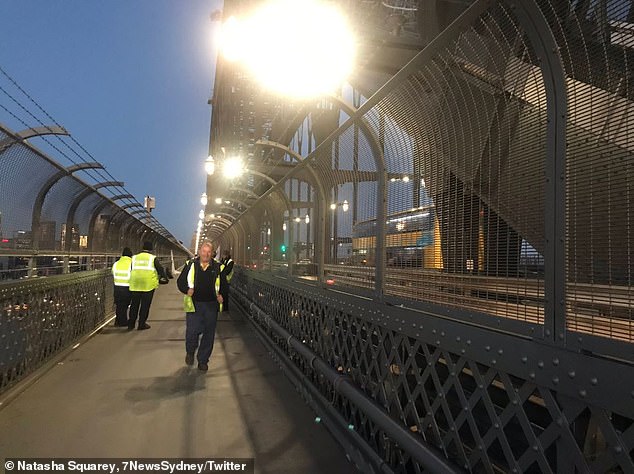 "People were arrested by security personnel, but others were able to climb under the structure," the New South Wales police said in a statement.

The Sydney Area Police Area Command police were present and were assisted by officers from the Rescue and Bomb Disposal Unit, Marine Area Command and PolAir to remove demonstrators from under the bridge.

Ten people were arrested at the start of the operation. Three other demonstrators were recently arrested, attached to ropes under the bridge.

"All 13 protesters were taken to the police stations in Surry Hills and Day Street to assist with the investigation." 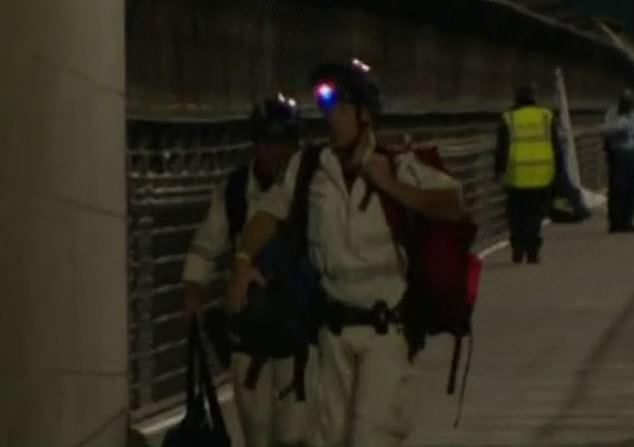 At 6.45 a.m. three of the demonstrators (pictured) were arrested and three others remained on the bridge

The group said their followers "occupied" the iconic bridge and six trained climbers roped off it. Pictured: police on site