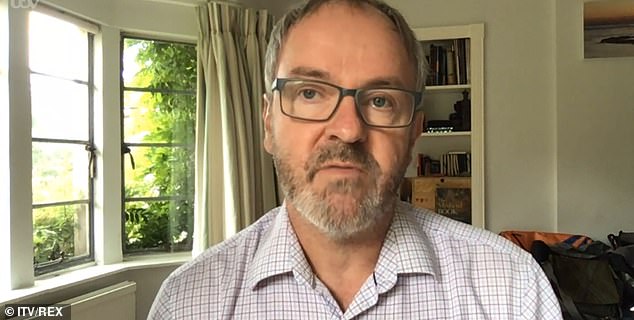 
Over the centuries, the course of respiratory diseases has been so erratic that in the Middle Ages it was attributed to the influence of planets. They were called "Influenza degli astri" in Italian – hence the term influenza.

Today our confused Prime Minister and his train of incompetent advisers might as well use the planets to guide us through this pandemic, as disastrous and wildly exaggerated are their choices.

Now let's repeat the pattern that happened six months ago when the country panicked for the first time, except that this time it received an outlandish title – Operation Circuit Break.

Carl Heneghan, Professor of Evidence-Based Medicine and Director of the Center for Evidence-Based Medicine at Oxford University (picture), and his colleague Dr. Tom Jefferson, senior associate tutor, says Prime Minister Boris Johnson and his advisors are making catastrophic and wildly exaggerated "coronavirus containment decisions amid concerns about a second wave of infections and" acting as if they are acting on a safety basis ".

Why is the government once again in the grip of disastrous scientific modellers who specialize in causing panic and little else?

This nonsensical term “breaker” is not the only aspect of government rhetoric that deserves scrutiny. Because it is the irrational, unscientific usage of language that is partly responsible for the ministers falling into these mistakes.

Take the word "trajectory," something we've heard a lot about over the past week. This is a ballistic term that suggests a certain level of security. It is claimed that our "trajectory" is Britain to Spain – and we may only be a matter of weeks behind it.

We've heard a lot about "waves" too. Even on Friday, Mr Johnson used the term to describe what was going on. We see "a second wave coming," said our awkward prime minister.

Waves are of course solid bodies of water that suddenly hit rhythmically and can be seen from afar. 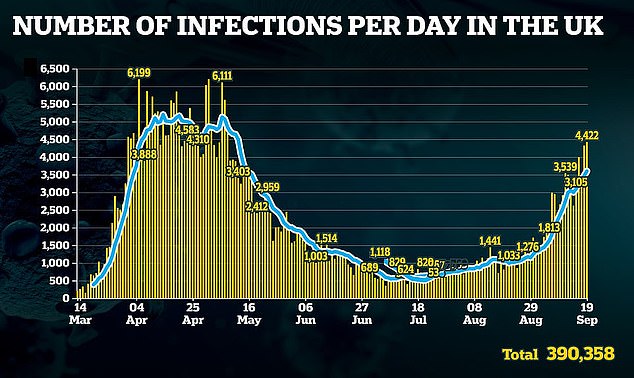 Coronavirus cases are on the rise again and could hit levels in mid-March, warned Boris Johnson.

Almost a third of Britons said they died of coronavirus in July and August and died of other reasons, according to Oxford University researchers.

They found that the official Covid-19 death statistics included anyone who died after testing positive for the virus – even if they were later hit by a car or had a heart attack.

The study found that coronavirus was not the leading cause of death in 465 cases out of 1,617 people who died from Covid-19 during the summer months.

Dr. Jason Oke of the Center for Evidence-Based Medicine at Oxford University told The Daily Telegraph, "The real death rate is important to know because it gives us an idea of ​​the effects."

The latest study found that Covid-19 is no longer among the top ten greatest killers in England.

But the pandemic has hardly developed like this. Epidemics tend to be chaotic. They are foggy, unpredictable, and never go the way you imagine. Hardly the properties of a wave.

"Behind the curve" is also used with deleterious frequency, especially when compared with other countries.

Take the latest reliable data from Spain (through September 3rd) that doesn't show an upward curve in infections, let alone one that brings us here to the UK.

In fact, the data shows that the number of Spanish cases rose in the last month – but then hit a plateau.

Some of the 17 Spanish provinces have already exceeded the highest infection rate (if you take into account the date the symptoms appeared), while the percentage of completely asymptomatic cases in Spain is increasing.

Anyone with clinical experience dealing with respiratory viruses knows that the only certainty is the uncertainty itself. 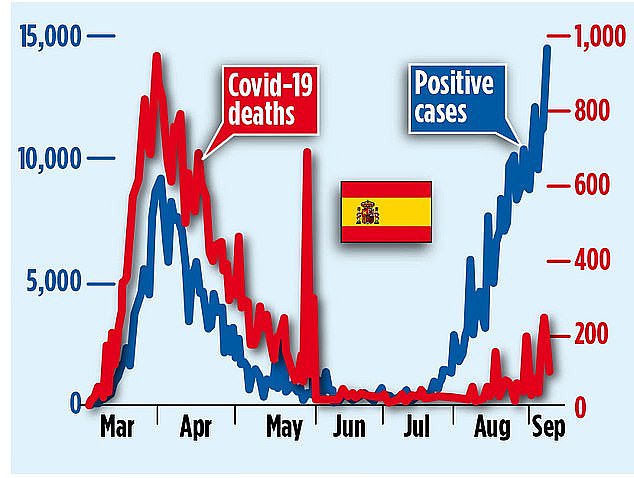 Here is a comparison of Spain's deaths in relation to its positive coronavirus cases.

However, our prime minister and his father's army of highly paid individuals with little experience of their jobs continue to act as if they are acting on the basis of safety.

Instead, they switch from one ill-designed, hasty decision to another, driven by the misguided belief that we are experiencing a “second wave” that follows Spain's “trajectory” and is only “behind the curve”.

Comparisons between countries using different national data with different definitions are no more useful than trying to compare apples and pears. It's not a good science. The fog of pandemic chaos has captured even the most basic and best understood of all outcomes: death.

Even now we cannot be sure what we are dealing with.

Are we looking at the deaths from Covid? Covid deaths? Or even deaths after Covid?

Our latest study, published yesterday, shows that almost a third of all deaths from Covid-19 recorded in July and August could actually be attributed to other causes – such as cancer or traffic accidents. 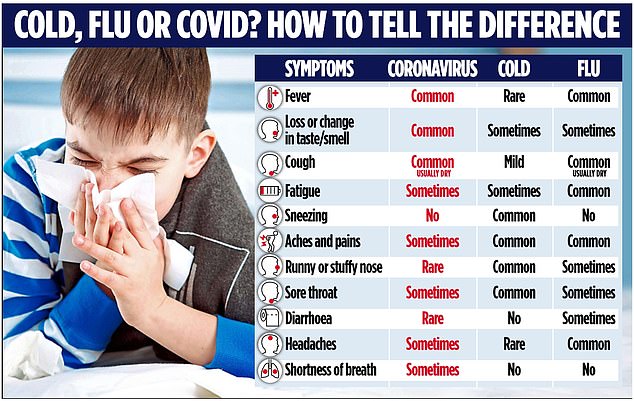 With winter approaching, you can tell the coronavirus apart from a flu or cold in the following ways.

It is unfortunate that Mr Johnson is surrounded by mediocre scientific advisers.

It's strange and worrying that the government is still relying on math modellers who have been making mistakes for 20 years and have been particularly wrong in the past six months.

Why have we lost sight of the fact that Imperial College agents have already admitted that Sweden – which had no lockdown – has likely suppressed Covid-19 to the same level as the UK, but without draconian measures?

And where are the 28,000 post-lockdown deaths in Italy that Imperial College predicted?

Does anyone remember the 2005 H5N1 pandemic influenza or avian flu? You will be forgiven for not remembering because, despite warnings from Professor Neil Ferguson and his team, there was no such pandemic.

This is just one example among many predictions that Prof. Ferguson was wrong.

How deadly is it? Covid versus falls, belly bugs, and flu

According to official statistics, Covid-19 accounts for an average of 11 of the 1,687 deaths per day in the UK.

In comparison, 124 people died of flu and pneumonia every day for the week ending September 4.

Five people die in road accidents every day in the UK, while infections – including C.diff – and stomach problems kill 5,937 per year, about 16 people a day.

So what's really going on, away from the computer models? For one, this is the end of September and the common cold, the rhinovirus, is on the rise again.

For the week ending September 17th, England's National Influenza Surveillance report shows that "rhinovirus positivity" has increased 23 percent in seven days. It is likely that the new school year set this in motion, like every year.

Covid also seems to be following this seasonal pattern and increases in colder weather, but the death rate does not seem to be increasing – at least so far.

So the good news is that anyone who has a new respiratory disease is likely to have a cold – not Covid.

But the rhinovirus also poses a problem. Because the symptoms of a cold mean many of us need a Covid test.

And more and more Covid tests are taking up dead – completely harmless – virus fragments as well as real infections. So many of the positive results that we think we will get may not be positive at all.

Our inability to accurately report the simplest of actions – such as the percentage of positive tests that were asymptomatic or the date on which symptoms started – is a major problem for our information gathering.

And the result is a confused, rudderless government lost in a swamp of poor statistics and ill-informed recommendations.

So, Mr. Johnson, you must have the long winter ahead of you.

It would be a useful start to downplay the rhetoric and put the available Covid data into context. (There are many more registered deaths from influenza and pneumonia than Covid right now, but the public is only given a daily diet of Covid.)

There might come a time when we need stricter rules for the population, but that time is not right now. If we need a national shutdown, keep in mind that there is a ready-made opportunity in the week after Christmas when many of us will definitely take a longer break.

Right now, the only “break” we need is an end to the current cycle of bad data, bad language, and shockingly bad scientific advice.