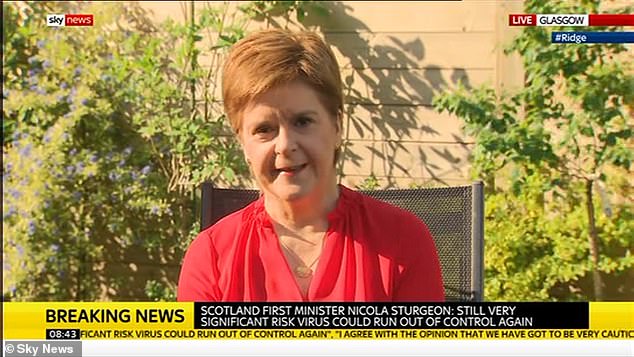 The Scottish First Minister said that the apparently higher proportion of victims in nursing homes north of the border is due to the way they are recorded.

She insisted that people who died of a stroke and "accidentally" suffered from coronavirus were counted in Scotland – while they were not in England, which meant that there was "under-reporting".

When asked in Sky News if she thought the prime minister was releasing the lock too quickly in England, Ms. Sturgeon insisted that she didn't want to criticize other politicians and everyone tried to do the right things.

But she specifically said that they are "very careful" in Scotland. "This virus hasn't gone," she said. "That's why we move very slowly in Scotland."

During the interview with Sophy Ridge, Ms. Sturgeon was informed that 46 corona-related deaths were committed in nursing homes in Scotland.

By contrast, the figure was 28 percent in England and Wales.

Ms. Sturgeon said: "Every single death from this virus is a matter of deep personal regret for me …"

But she said she didn't think Scotland's deaths in nursing homes were really higher.

“If you die of a stroke in Scotland, but you also happen to have the virus, you will be involved in the Covid deaths.

Ms. Sturgeon said "at first glance" that it was a "question of sub-reporting from England".

She said that if she was a scientist right now, she "could be a little worried that politicians would try to blame me for the decisions."

Most nursing homes in the UK have no staff tested for coronavirus. The numbers indicate that the government is still far from its universal testing target by early June.

The latest data on personnel tests indicate similarly low numbers as in the last few days regarding the tests of residents.

62 percent of nursing homes have not tested any employees since the pandemic started until May 27, according to figures from the Data Analysis Bureau (T-DAB) and Person Centered Software (PCS).

Health Minister Matt Hancock said on May 15: "We will test every resident and employee in our nursing homes in England by early June."

T-DAB examined a total sample size of 12,407 nurses from 650 nursing homes in England, Wales and Scotland.

It was found that between the date of Mr. Hancock's announcement and May 27, 9% of nursing home staff had been tested. The number for England was slightly higher at 10%.

Only 15% of nursing home staff have been tested at any time since the outbreak, as figures showed.

The organization said 6% of nursing home staff had been tested over the seven days through May 27.

Simon Briscoe, director of T-DAB, said: "The nursing home staff test rate has increased over the past week, but is still far too slow to meet the government's target.

"Examining just one in ten employees and residents is far below the rate required by industry associations and targeted by the government."

Professor Martin Green, managing director of Care England, said Friday that tests in care facilities should be prioritized and called for "adequate guidance" for households regarding the NHS test and trace program that started in England that day was before.

Data released by T-DAB earlier this month suggest that 38% of nursing homes have not tested any residents since the pandemic started.

The award-winning investor, 36, is found dead in a barn near his £ 3.5m house
During George Floyd's protests in Denver, the car is deliberately driven into a police vehicle
Comment