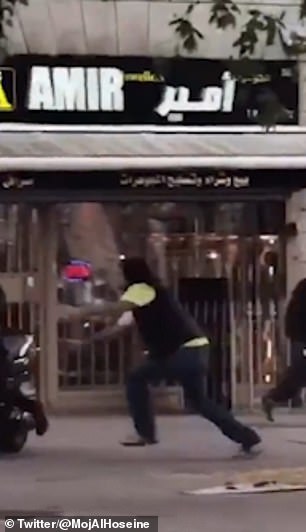 
After a robbery, brave spectators hit a moped racket on his bicycle, then chased him down the street and beat him with belts, although his gang was armed with machetes and hammers.

Shocking footage showed the moment when the gang of at least eight men carried out an armed robbery on a London jewelry store with hammers and blades.

The group of half a dozen men dressed in black and driving scooters stopped in front of Amir Jewelery in Maida Vale in north London before rushing into the store and stealing gold.

But heroic members of the public desperately persecuted two of the attackers yesterday, one knocking down a suspect with a traffic cone.

Another used a trash can and a menu board to stop the sounds. The 28-year-old Khyali Shinwari told the Evening Standard that he tripped one of the men before about ten people nailed the suspect.

"They all came in and threatened the customer with a hammer," he said. & # 39; We drove them out. One of the group took a menu sign from Carluccio and threw one of the robbers off his bike. And then everyone ran after him. & # 39;

The video showed bystanders who managed to knock down one of the men and beat him with a belt before the police arrested him.

Two other people were arrested by armed police at Camden Market, two miles away. It is still believed that four are at large.

A video released online shows the robbery when a panicked 999 caller says: "Hello, burglary at Maida Vale Road Amir Jewelery, they'll have a knife quickly! They went in, they have a knife that they use to attack people. & # 39; 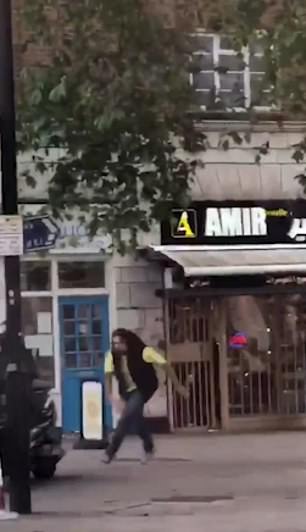 Shocking footage captures the moment when a knife-swinging moped gang carries out an armed robbery at Amir Jewelery in Maida Vale in north London this evening. A member of the public (center) tries to track them 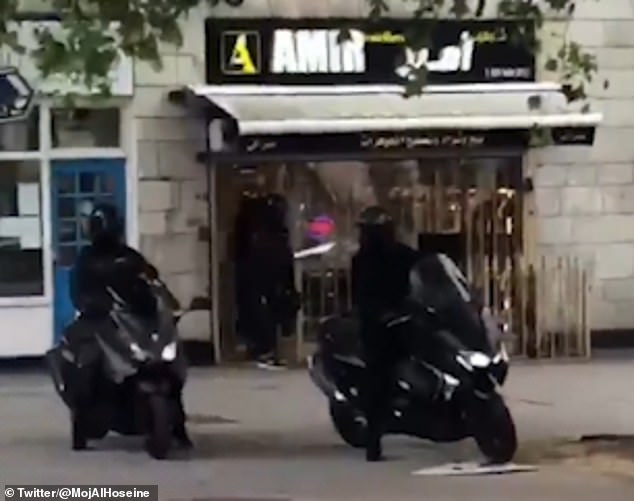 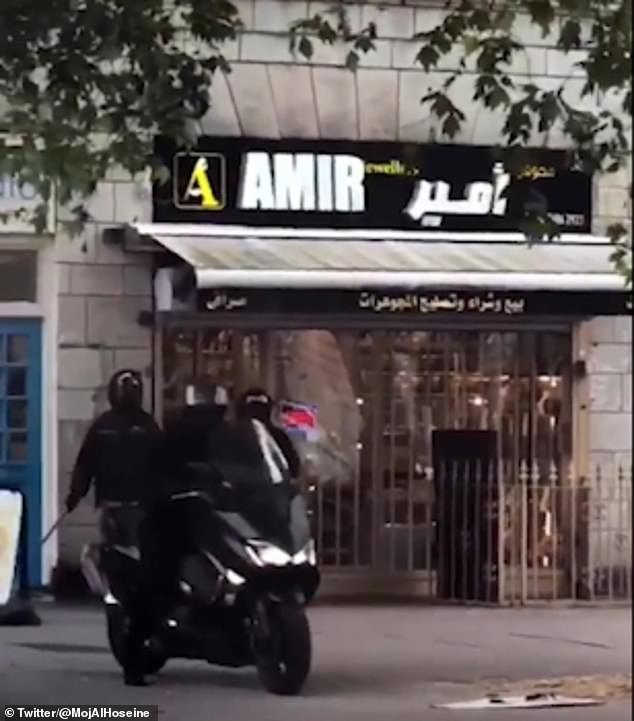 The public was desperate to catch the perpetrators, who were also armed with crowbars and a hammer, shortly after 5 p.m. during the robbery today

The public was desperate to catch the perpetrators, who were also armed with crowbars and a hammer, shortly after the robbery at 5 p.m. today.

Pictures of the aftermath of the incident show broken glass in the store and jewels spreading across the floor.

A man in his twenties who lived nearby and helped catch one of the men told MailOnline that he saw six people driving four motorbikes today.

He saw her break into the shop and immediately called: "Police, police, help!" Draw attention to yourself.

The witness claims that he managed to trip one of the men before a group of nearly 10 people grabbed his arms and legs to hold him before the police arrived.

He said, "It was terrifying, there were people shouting that he had a knife.

"Some people grabbed his arms while the others got his legs and we took off his helmet so he could breathe."

He claims the man asked his colleagues not to leave him before they ran away and the police arrived three or four minutes later.

A crowbar that broke the gang lay outside on the street.

A spokesman for the Metropolitan Police told MailOnline: "The police were called to the W9 jewelers at 5.12pm on Monday May 20th to report a group of moped drivers armed with knives, a hammer and a crowbar .

One of the suspects, a man, was arrested after being arrested by members of the public at the scene.

& # 39; He was taken to the hospital for treatment for a minor injury. Two other male suspects were arrested a short time later by the armed police near the Camden market square. 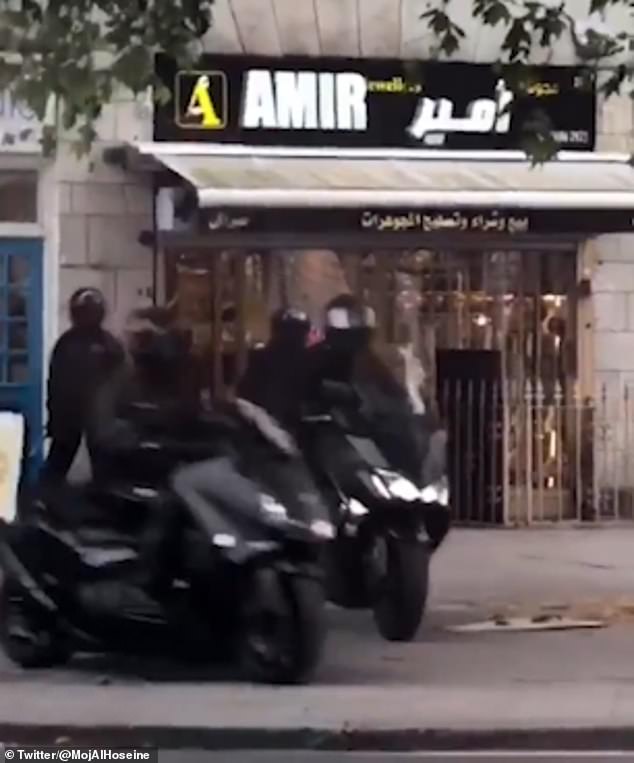 Three of the men were arrested – one at the scene and two others at Camden Market, two miles away 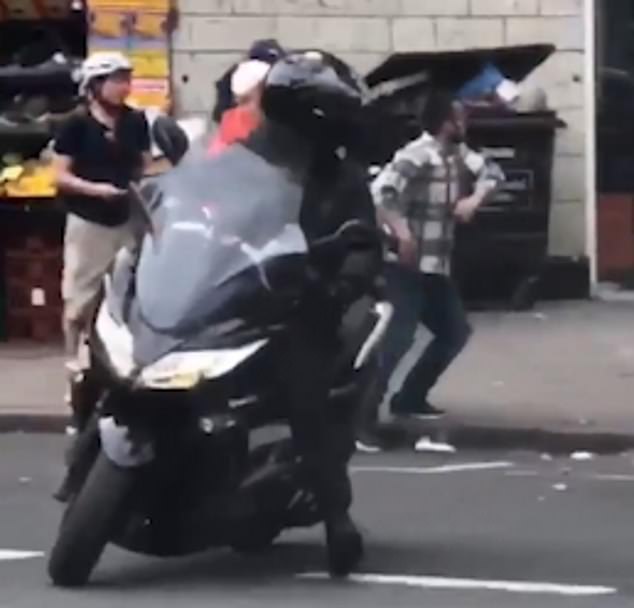 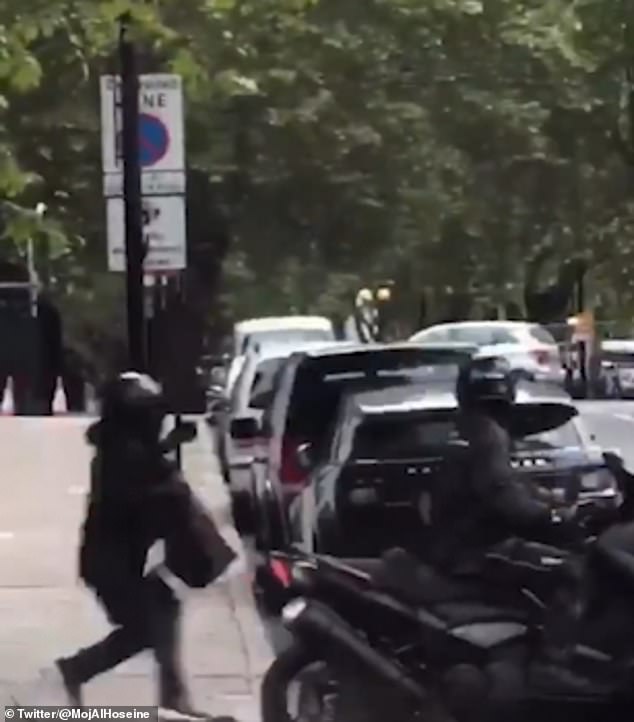 Murder investigation after the pensioner's death in the market town of Dorset
Man, 39, accused of beating up a little girl in a vacation home
Comment