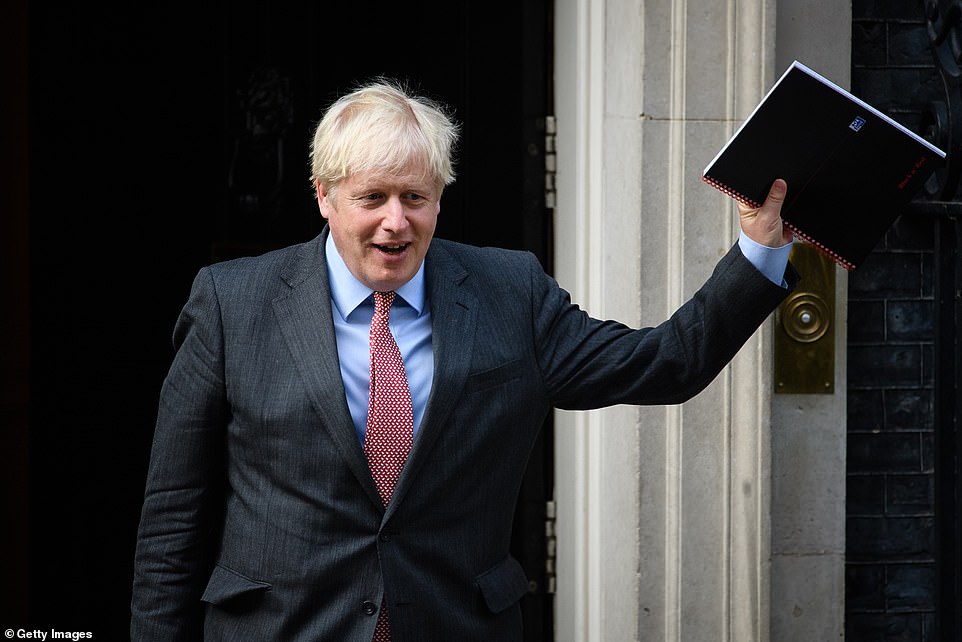 
Michael Gove confirmed today that the government is turning its back on work and people are now being encouraged to work from home where they can as Boris Johnson unveils his latest plans to contain the spread of the coronavirus.

The Prime Minister is due to table a number of measures to fight the disease today, including putting a curfew on all pubs, bars and restaurants in England from 10pm on Thursday.

Other possible restrictions that could be announced include further delaying trials of spectators returning to professional sporting events, closing indoor concert halls and reducing the number of people allowed to attend weddings.

Mr Gove's confirmation that the government is turning its urge to get more workers back into offices on its head is likely to spark dire warnings about the future of struggling city centers.

Mr Gove said there needs to be a "shift in focus" to combat the rising rate of infection and that "one of the things we're going to highlight is that we'd encourage people to work from home" to do so ;.

The move marks a detrimental moment for Mr Johnson, who in July said people "should go back to work now if they can" and in early September told his cabinet that "people are going back to offices in large numbers in our country "and quite right too & # 39 ;.

The 10pm curfew in the hospitality industry sparked an immediate backlash in the industry when the UKHospitality group said it was "another major blow".

There are also fears that the move could have unintended consequences if warned of a possible “increase in unregulated events and house parties”.

Tory MPs also expressed concern about the curfew, calling it a "terrible blow" to the hotel industry and warning that there could be no further "major lockdown".

It was alleged overnight that Mr Johnson had initially advocated a full shutdown of the hospitality and leisure sectors before Chancellor Rishi Sunak persuaded him to adopt a less stringent course after warning of economic slaughter.

However, there are growing concerns that the government may impose stricter restrictions on socialization that go even beyond the current six rule. That could mean a ban on mixing households.

Despite the Prime Minister's new move, some experts have already warned the measures will not be enough after Chief Scientific Advisor Sir Patrick Vallance said yesterday that the UK could suffer 50,000 cases a day by mid-October and more than 200 deaths a day by November, unless Britain changes course.

Calum Semple, professor of child health and outbreak medicine at the University of Liverpool and a member of the government's scientific advisory group on emergencies (Sage), said there are "several areas of society that unfortunately need to increase their restrictions".

Mr Johnson is expected to set out his actions in detail in the House of Commons after a Cobra meeting this morning at lunchtime. He will then deliver an address to the nation at 8 p.m. tonight.

Confirming the relocation of work from home this morning, Mr Gove told Sky News, “There will be a shift in emphasis and one of the things that we will highlight is when people can be from home to work then we would encourage them to do so.

“Now it's important to emphasize that there are many, many, many roles that cannot be performed from home.

“There are people in manufacturing, construction, retail, and other roles that we see that this is simply impossible. That is why we have been committed to ensuring that you have Covid-safe jobs and of course we have to balance the need to ensure that people can continue to work and actually continue to go to school critically and to benefit from education without any reduction measures of the virus, which is why we can limit or appropriately limit social contact, we try to do so. & # 39;

"We hope that we can take appropriate steps now. If we can fight back the virus, we can gradually relax it in the future," he told BBC Breakfast.

"But what I can't do is predict with absolute certainty."

When asked if it would be months or weeks, Mr Gove said, "It is, as Professor Vallance and Chris Whitty pointed out yesterday, that we will have a challenge in the next six months."

Mr Gove insisted that the government take "reluctant steps" with the new coronavirus measures, but added that they were "absolutely necessary".

"There will be more details that the prime minister will set out and one of the points that he will make is that nobody wants to do these things, nobody wants to take these steps," he told Sky News.

“The steps we are taking are reluctant, but they are absolutely necessary.

"Because, as we were reminded yesterday, and as you reported, the infection rate is increasing, the number of people going to the hospital is increasing and we must therefore act."

It was alleged overnight that Mr. Gove and Secretary of Health Matt Hancock pushed for a complete shutdown of the hospitality industry.

The Times reported a "consensus" formed over the move last Thursday with members of Sage who were also on board, on the grounds that it would be impossible to predict the effects of a curfew.

The Prime Minister is said to have initially endorsed the shutdown plan, which raised concerns within the Treasury and the Department of Economic Affairs, Energy and Industrial Strategy and asked Mr. Sunak to request a meeting with Mr. Johnson.

That meeting took place on Friday as Mr Sunak warned of the economic damage a full hospitality shutdown could cause, causing Mr Johnson to change his mind and instead pursue the less stringent curfew plan.

The new restrictions caused trouble in the hospitality industry. Kate Nicholls, UKHospitality General Manager, described it as "another devastating blow" to many companies.

"A hard graduation time is bad for business and bad for fighting the virus. We need to give people time to disperse over time," she said.

“Since the reopening, table service is widespread in some parts of the sector, but not required in all areas of business such as coffee shops.

"It's hard to understand how these measures are the answer to the disease when government data shows that only 5% of infections outside the home are hospitality-related."

Michael Kill, executive director of the Night-Time Industries Association, warned the measures could spark a spate of unregulated events and house parties that are the real sources of infection attended by frustrated young people denied access to a safe and legitimate night has been. Time hospitality places & # 39 ;.

The measures also sparked a backlash from the Tory, with senior Conservative MP Sir Bernard Jenkin calling it a "terrible blow".

He told BBC Radio 4's Today program: “The people who run pubs, own pubs, are in a terrible strain.

"And the lifeline of loans and grants has kept these people almost afloat, and this is going to be a terrible blow for them."

He added, “What would be the worst case scenario would be if we had to have another major lockdown. That would be terrible for the economy.

“Anything that can avoid or reduce this risk appears to be justified.

He said parliament had to debate and vote on the government's proposed measures after his Tory colleagues yesterday accused Mr Johnson of "decreeing". 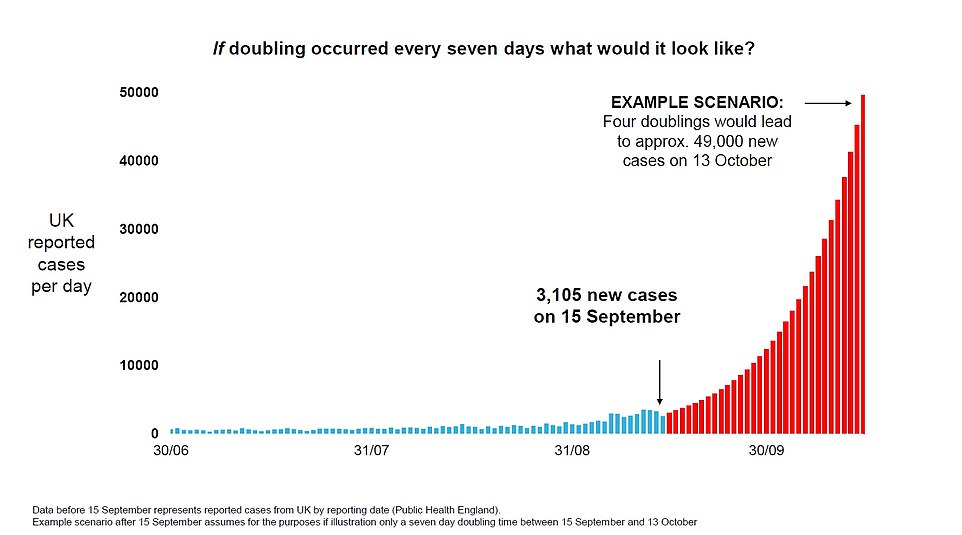 Official Downing Street slides showed that if the infection rate continued, there could be 50,000 coronavirus cases a day through mid-October, which could result in more than 200 deaths a day by mid-November 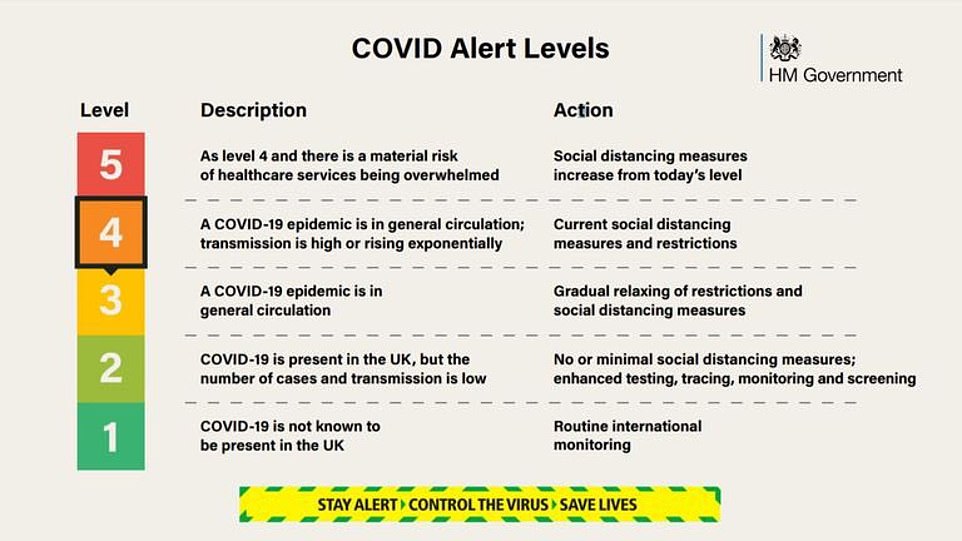 There are already fears that the government will have to impose further draconian restrictions in the coming weeks and months.

Professor Semple was asked on BBC Radio 4's Today program if he believed the 10 p.m. pub curfew would be enough to stop the spread of infection.

He replied: & # 39; No, that won't be. There are some areas of society where its restrictions unfortunately need to be tightened, but it is necessary now as cases are increasingly emerging not only in the frail elderly but also in those under 50. "

When asked what else could be clamped down soon, the Sage advisor said, “We will potentially have to watch fewer sporting events and that will hit many of us hard because we enjoy soccer, boxing and other activities, especially in the North West of England.

"We'll likely see increased restrictions in the hospitality industry as time goes on. I think that curfew and table service probably only need to go through 10 am. I think that's very likely."

The Prime Minister's announcement of new measures by the Prime Minister comes after the government's top two academics paint a bleak picture of what could happen if the UK fails to get the coronavirus under control.

Sir Patrick said yesterday that there could be 50,000 new daily cases by October and more than 200 daily deaths by November.

Alongside Professor Chris Whitty, the chief medical officer, Sir Patrick said the "vast majority of the population are still vulnerable to coronavirus" and that the current situation requires swift action to reduce the number of cases.

Prof. Whitty suggested that reducing social contact was a key to containing the spread, but acknowledged that a balance had to be struck to protect the economy. 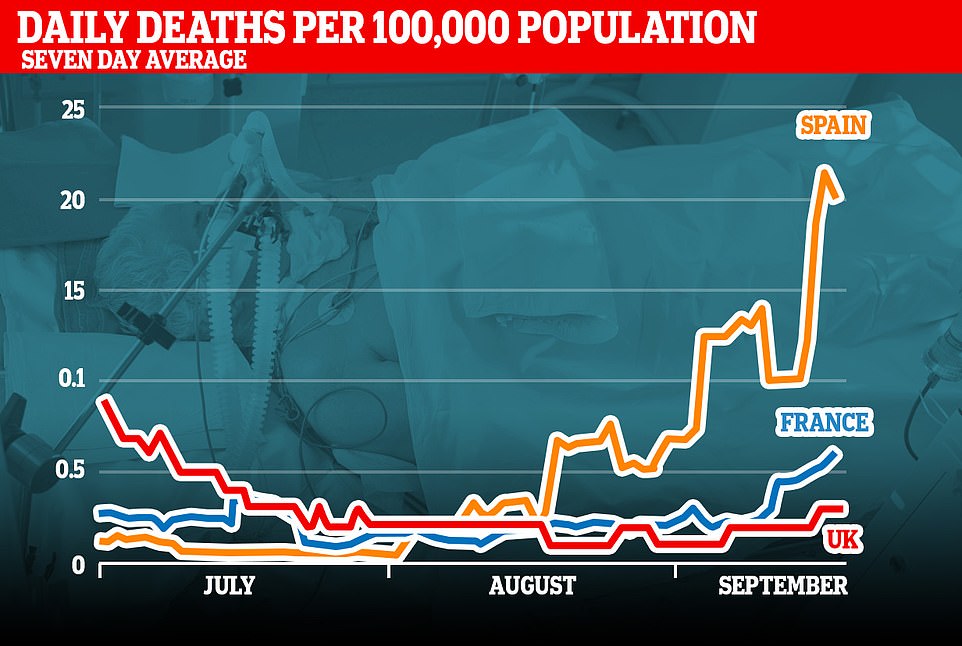 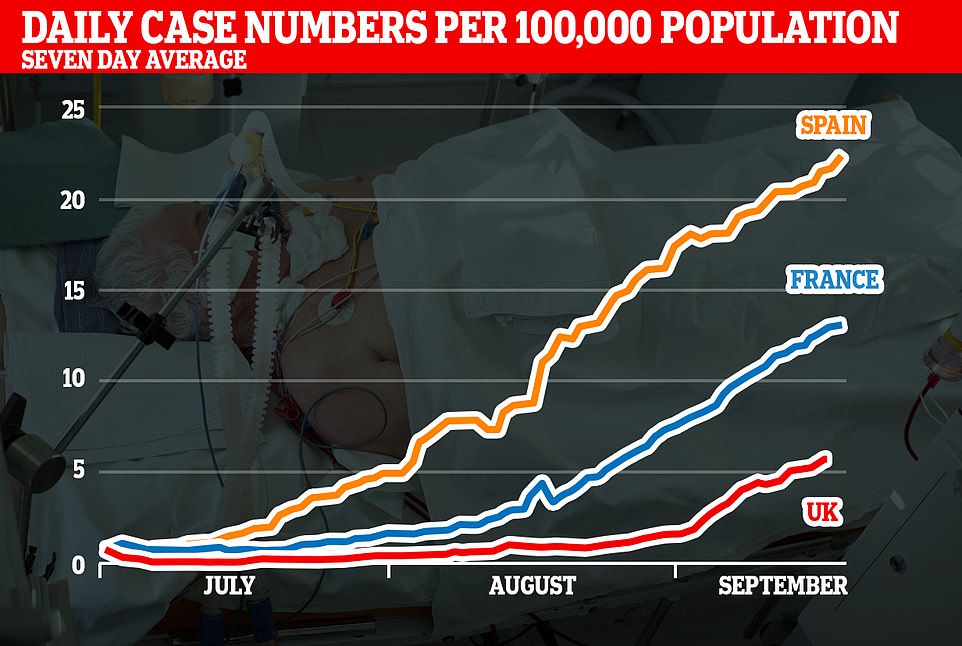 "Ministers who make decisions – and society as a whole – have to find this very difficult balance," he said.

“If we do too little, this virus will spiral out of control and result in a significant number of direct and indirect deaths.

“However, if we go too far in the other direction, we can damage the economy, which can affect unemployment, poverty and disadvantage. All of these have long-term health effects. So we have to keep these two sides in mind. & # 39;

He suggested that science would "ride to our rescue" at some point, but "in this time of the next six months, I think we must realize that we must collectively take this very seriously."