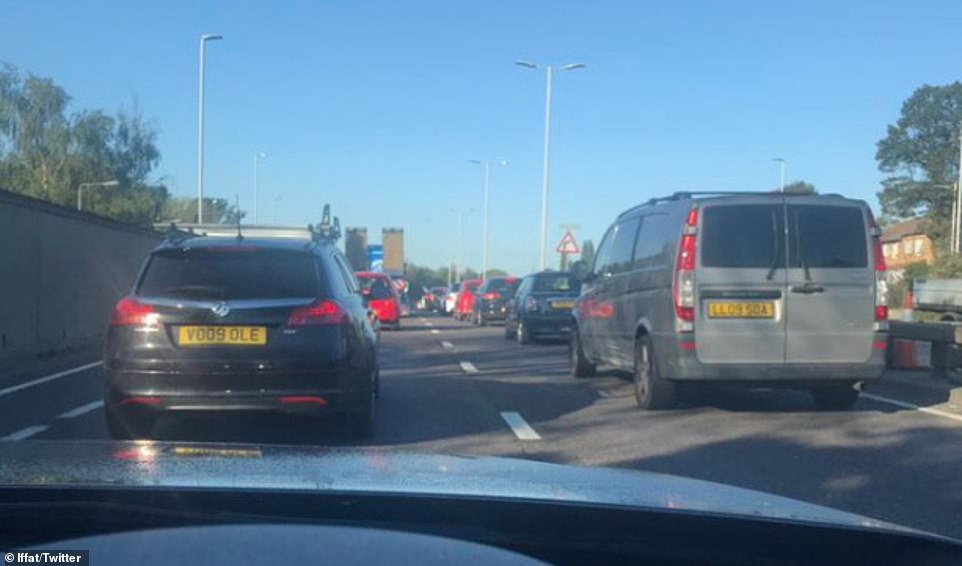 
UK rush hour traffic began to normalize again today as returns to work accelerated after the coronavirus lockdown – with more than 370 traffic jams totaling 200 miles in London during rush hour.

According to TomTom data, at 8 a.m. today, road congestion in the capital was 36 percent, up from 31 percent last week – an increase of five percentage points, or 16 percent (one sixth).

Traffic jams in London, however, are still well below the 67 percent average last year. In Birmingham, the number at 8 a.m. was 23 percent, down from 25 percent at the same time over the past week.

Meanwhile, the major train stations in the capital still seemed empty. Photos taken during rush hour at the London Terminals of Victoria, Waterloo and King & # 39; s Cross hardly showed anyone in the hall.

It comes as the school run returned with millions of children returning to the classrooms this week – many for the first time in nearly six months. Forty percent of schools in England open today, the rest later this week.

A London-based Twitter user posted this picture around 8:30 am today and said, "Looks like everyone is back at work!"

According to TomTom data (red line), the traffic jam on the streets in London at 8 a.m. today was 36 percent, compared to 31 percent last week (red dotted line) – but still well below the average of 67 percent last year (blue line) 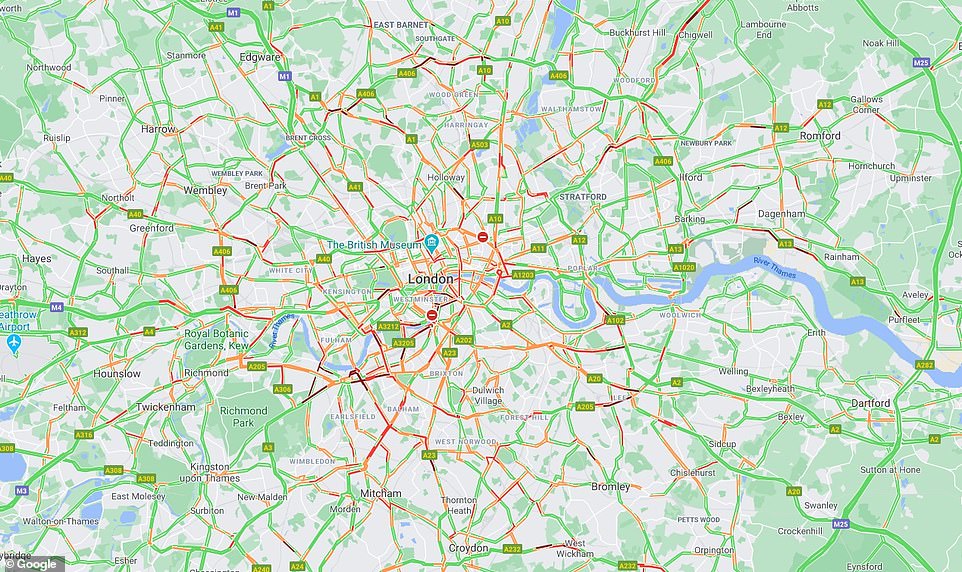 A Google Traffic map shows how many streets around the capital were occupied at 8:30 a.m. this morning when people went to work 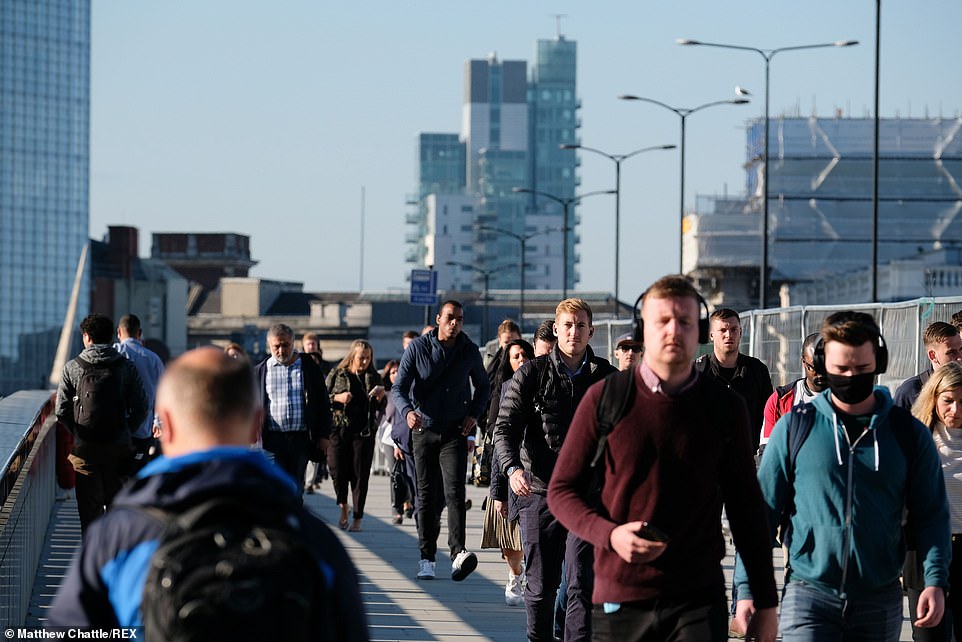 City workers cross London Bridge at 8:30 a.m. this morning as commuters return to work in the capital today 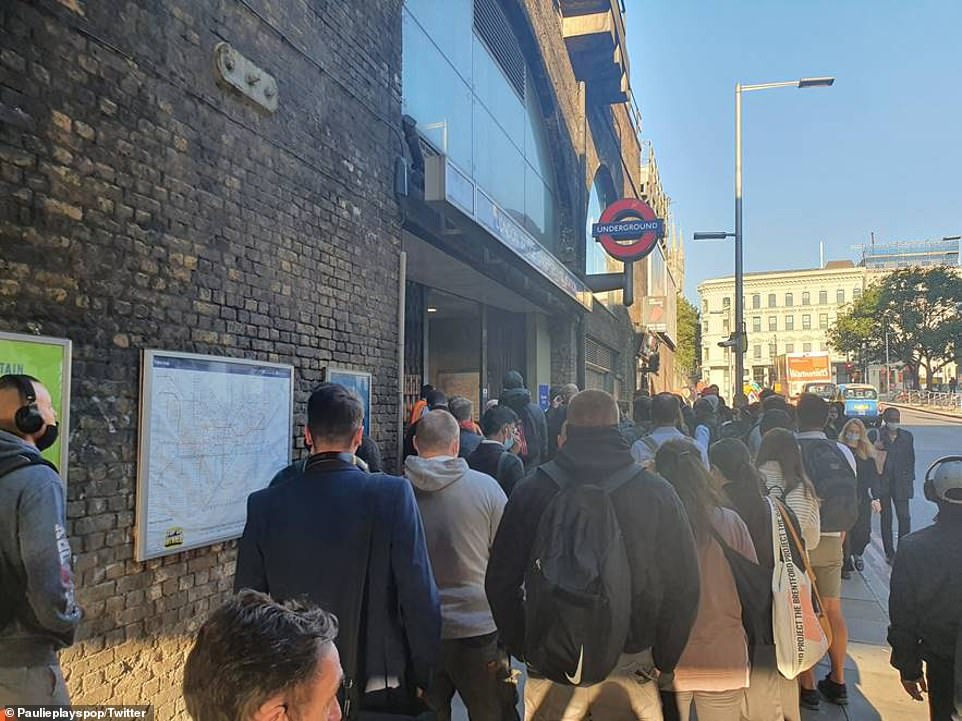 A Twitter user posted a photo of commuters queuing at London Bridge tube station at 7:51 this morning 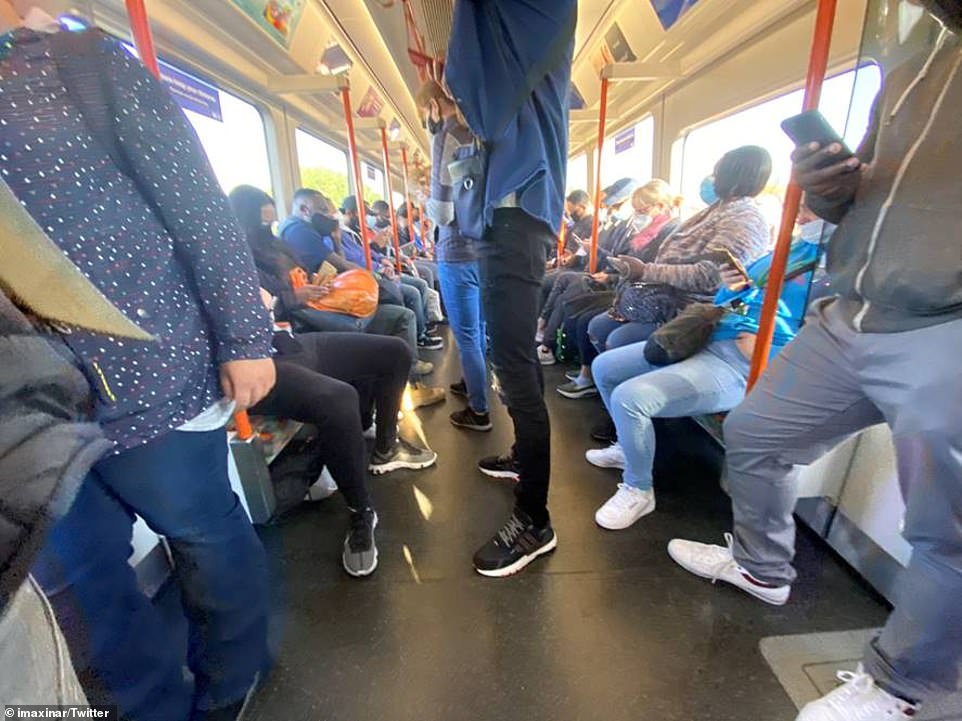 A Twitter user picture of a busy London Overground train saying it had "11 people pushed through the doors" today.

A number of top firms across the country announced that their employees were flocking back to the office. Others said they are considering plans to lure workers out of their homes.

In a significant boost to the campaign to attract more office workers downtown, many companies said they have seen an increase in the number of employees returning to their desks.

But Boris Johnson's drive to get Whitehall back to work was hit again when the union leader threatened strikes if members were forced to return to work before it was deemed safe.

"I'm scared and so am the students": A new teacher on his first day recounts fear of "no PPE" in school, where "social distancing is impossible" when millions of students return in England and Wales 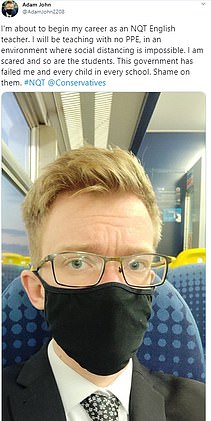 Adam Woodward, 23, a Labor supporter who now teaches English at a Barnsley college, tweeted, "I'm scared and so are the students."

A newly qualified teacher today showed his fear of being back in school without personal protective equipment on his first day of work as millions of children in England and Wales returned to class for the first time in six months from Covid-19 lockdown.

Labor supporter, 23, Adam Woodward, who is starting to teach at Horizon Community College in Barnsley, South Yorkshire, tweeted, “I am about to start my career as an NQT English teacher (newly qualified teacher).

“I will be teaching without PPE in an environment where social distancing is impossible. I'm scared and so are the students. This government has failed me and every child in every school. Shame on them. & # 39;

The Sheffield Hallam University graduate wrote of his fears when he posted a selfie of himself in a mask on a Northern Rail train this morning while a study found students were three months behind lockdown with boys and the hardest hit lag behind poorer students.

According to the government, children in schools are generally not required to wear masks, while college rules require students who arrive with face covers to remove them at the entrance.

At a crucial moment in Boris Johnson's drive to get the country back to normal, around 40 percent of schools in England are open today – the rest later in the week.

They were closed on March 20 by the coronavirus pandemic, with only vulnerable students and children of key workers being allowed to continue classes. Education Secretary Gavin Williamson's fate is also at stake after he was seen as a botched effort to get more elementary school students back before the summer break.

After a lockdown that saw more than 95 percent of officers working from home, each government department was asked in July to set ongoing return targets.

Mr Johnson is expected to urge ministers to speed up the process this week after a "slow" response.

He is said to believe that officials should set an example to the rest of the country.

But Mark Serwotka of the Union for Public and Commercial Services said: "If you have no other choice as a last resort and people's health and safety are at risk, we would of course be ready to think about industrial action."

Environment Secretary George Eustice appeared yesterday to undermine the initiative by revealing he has no "target" and adding, "We will not get a 100% return to work."

Last week, Health Secretary Matt Hancock said he was glad officers could stay home when they got the job done.

The news comes in a Daily Mail audit of 30 FTSE 100 and top companies representing more than 150,000 employees.

The high street chain Boots saw a steady increase in visitor numbers. Around a third of office workers sat at their desks at least a few days a week.

No cases of Covid-19 were recorded in this cohort.

In another batch, the head of recruiting giant Hays swore that there would be no "back from the office".

However, he also predicted office closures as companies consider moving permanently to a “hybrid” model where home and office work are balanced.

On Sunday, it emerged that one of the UK's largest employers, Capita, would be the first major UK company to pull out of the city and city centers by closing nearly 100 offices.

The government contractor who collects the BBC license fee and collects the London congestion fee is expected to close more than a third of its 250 offices across the UK. The 45,000 UK employees will continue to work from home.

The news will come as a heavy blow to Boris Johnson's return to work campaign due to start this week.

It was also revealed on Sunday that BP plans to sell its headquarters in central London as part of a permanent change in work patterns.

Developments will add to fears for downtown businesses, from sandwich shops and pubs to dry cleaners and hairdressers that rely on pedestrians out of offices.

In a glimmer of hope, several companies polled by the Mail said either workers were falling or plans were being made for major increases.

Much of the said numbers returning will be based on the government's success in getting kids back to school this week.

Audit giant PricewaterhouseCoopers said around a third of its 24,700 office workers now spend at least some time at their desks and that is increasing. 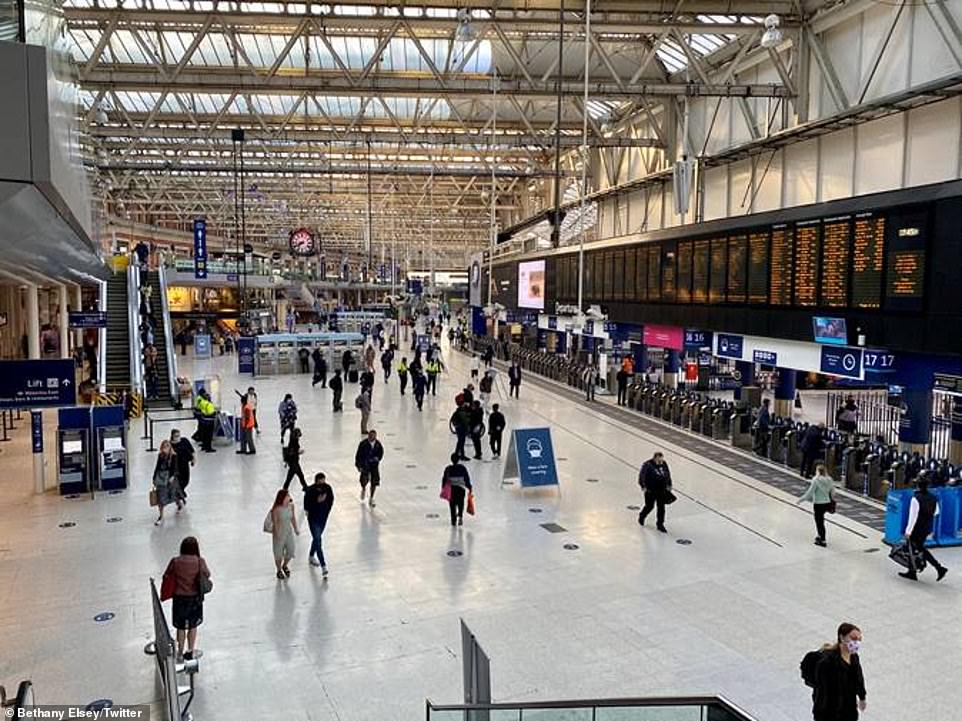 London Waterloo Station, the busiest train station in the UK, was still very quiet just before 8 a.m. this morning 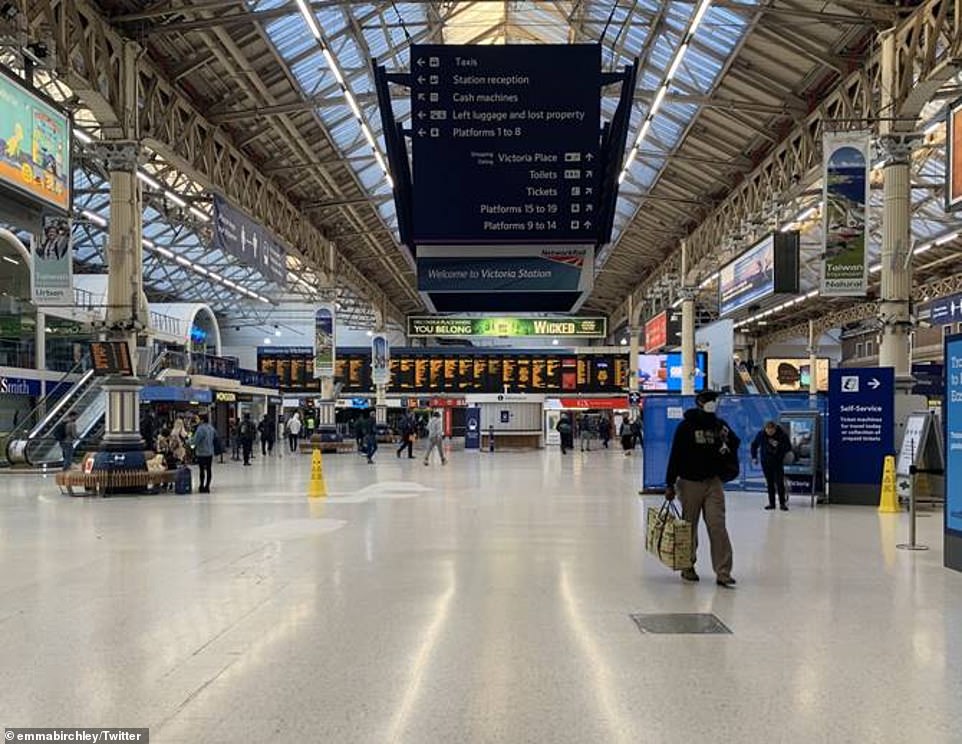 London Victoria Station appeared to be mostly empty at 7:30 a.m. today, despite being the UK's second busiest station 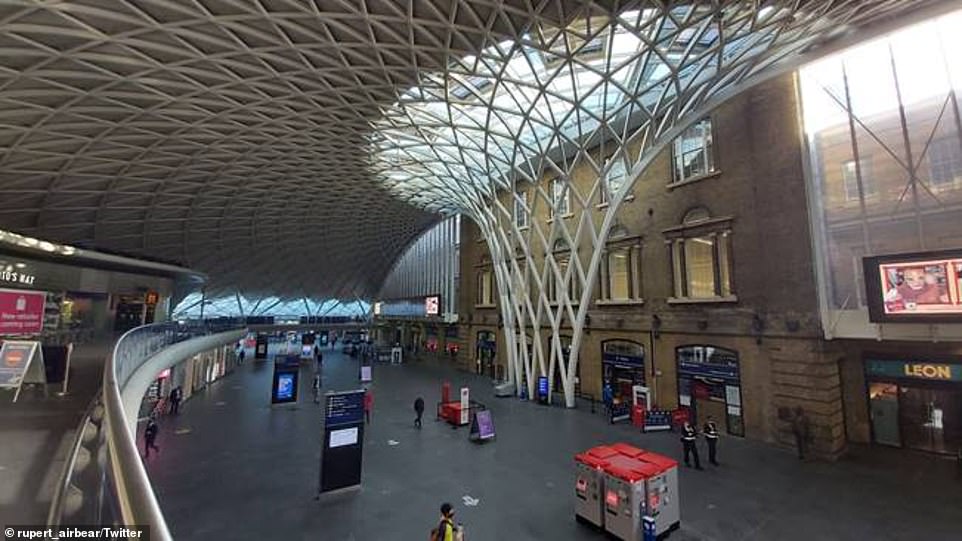 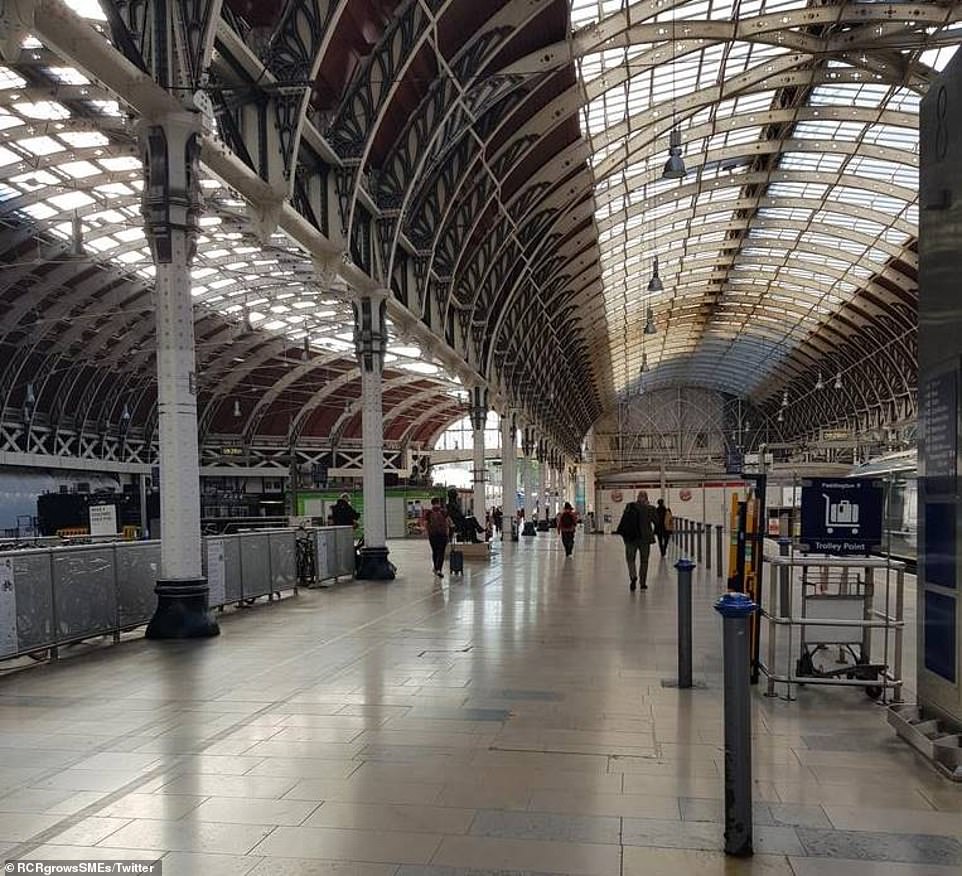 An empty Paddington Station in London is pictured at around 9.30am near the end of rush hour this morning 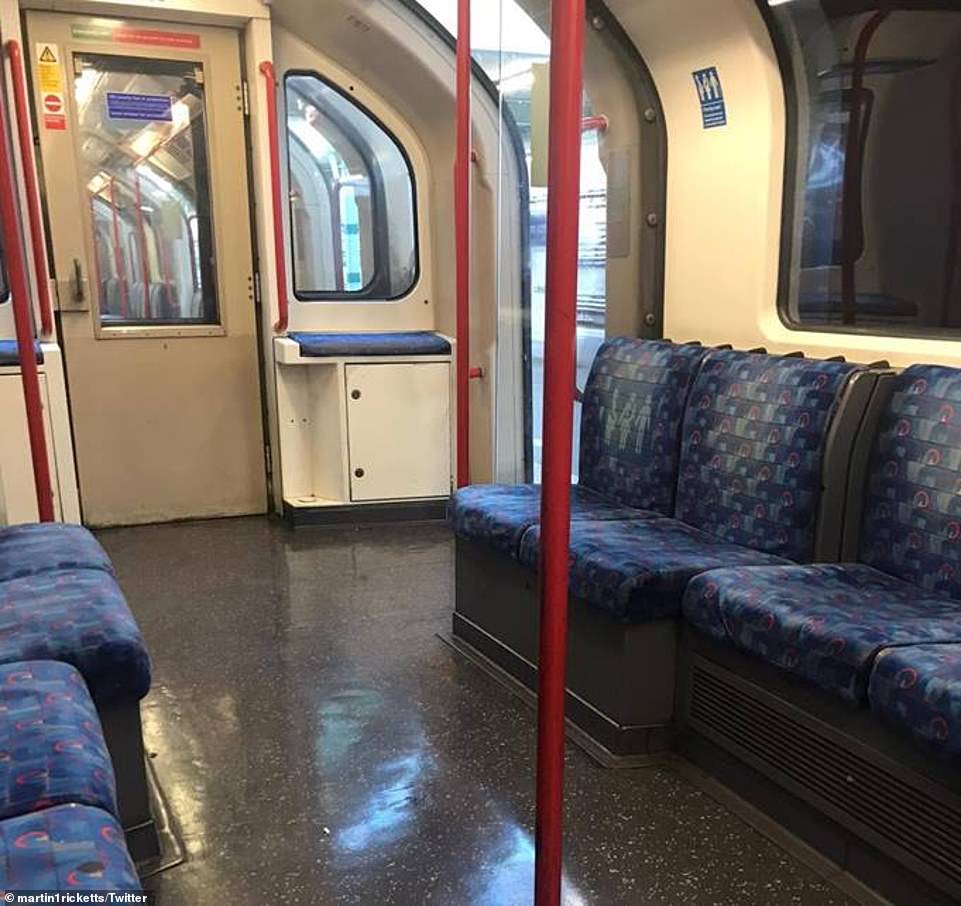 There is no one to be seen on the Central Line train from White City to London this morning, even though it is 8 a.m. rush hour 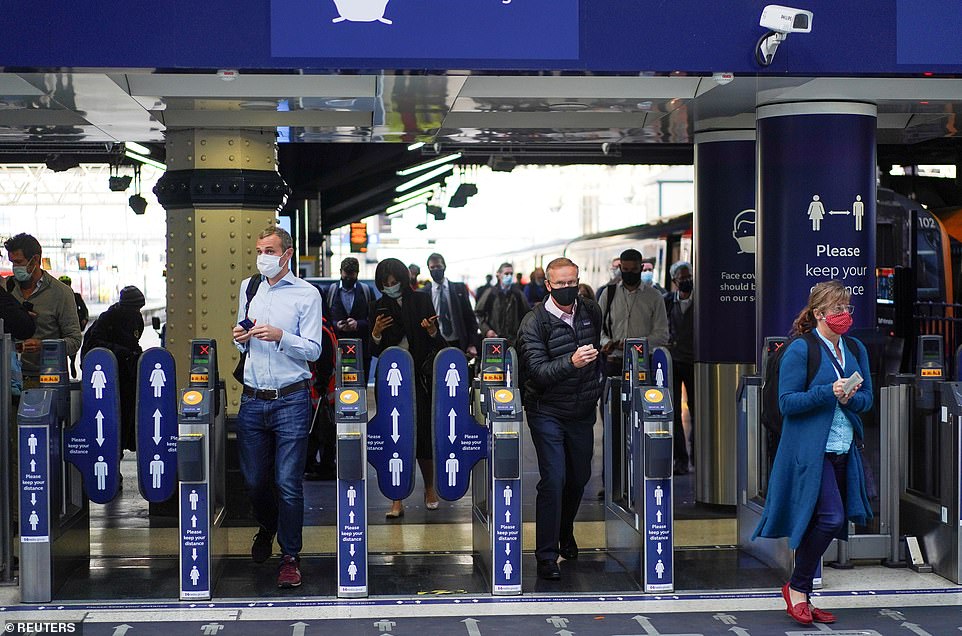 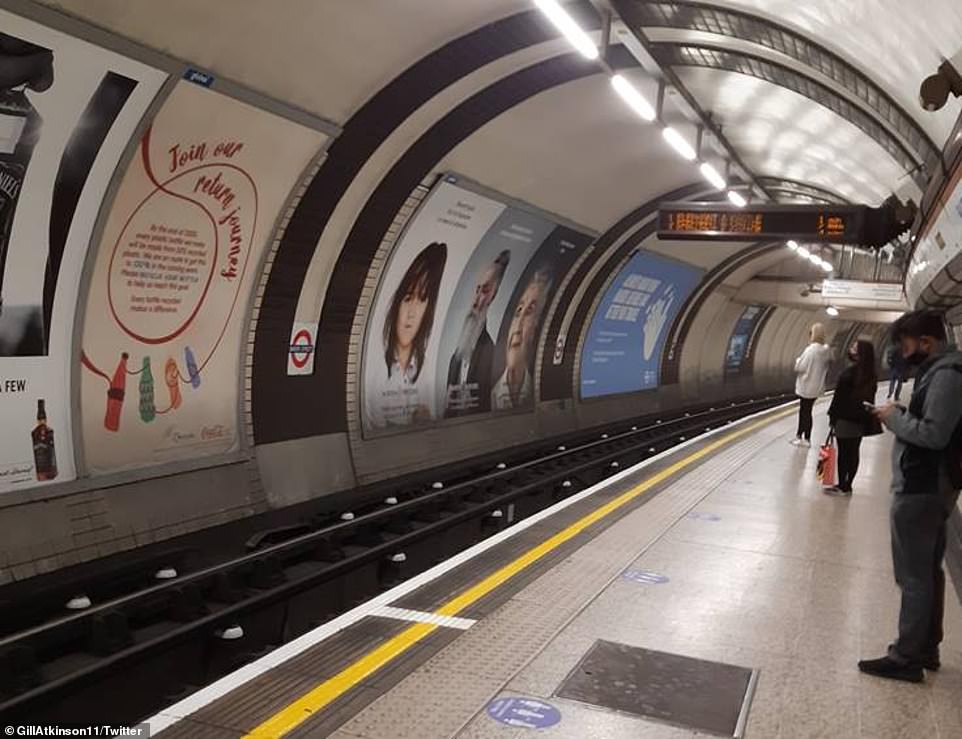 A very quiet southbound platform at Baker Street Station in London on the Bakerloo line around 8:30 this morning 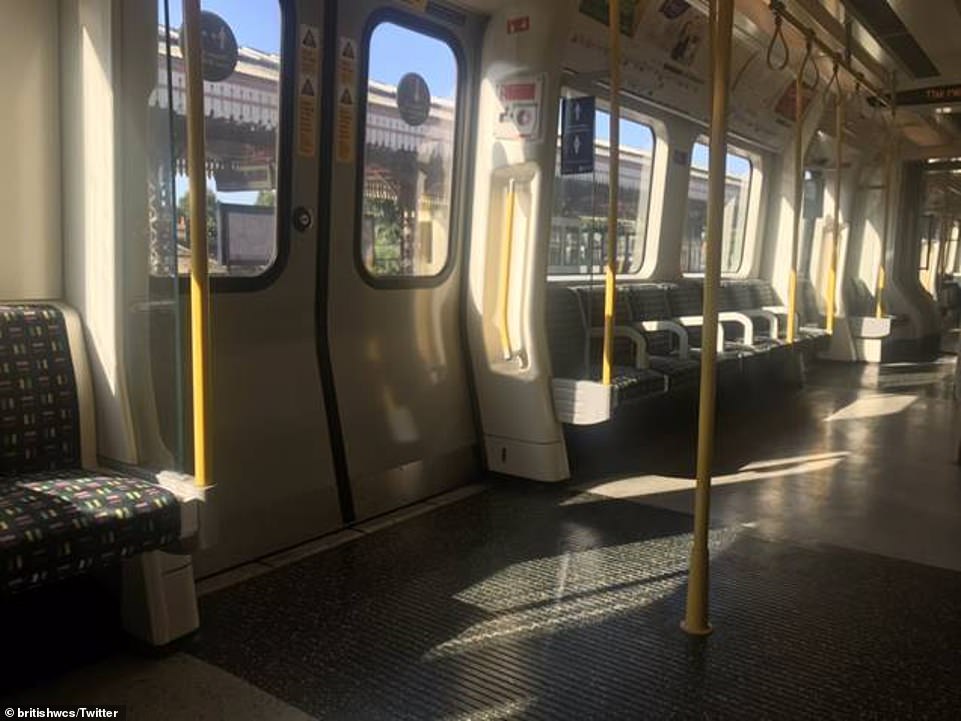 Commuter Guy Peppiatt said there was only one other person in his subway car on the Circle line just before 10 a.m. today 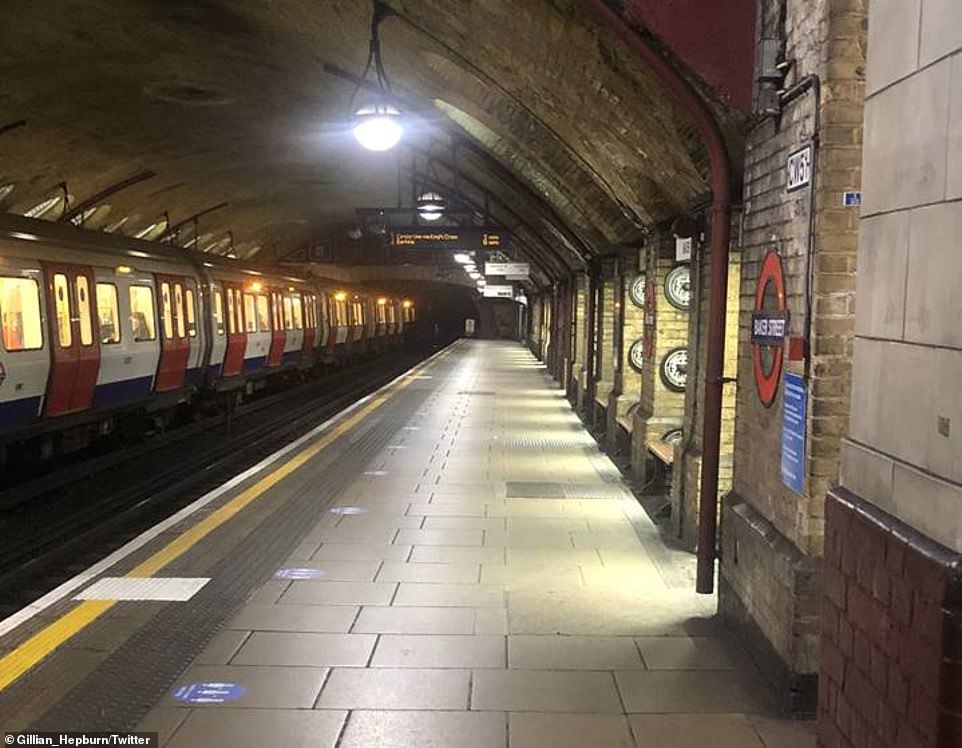 An empty Circle and Hammersmith & City Line platform at Baker Street Station in central London this morning at 7.45am 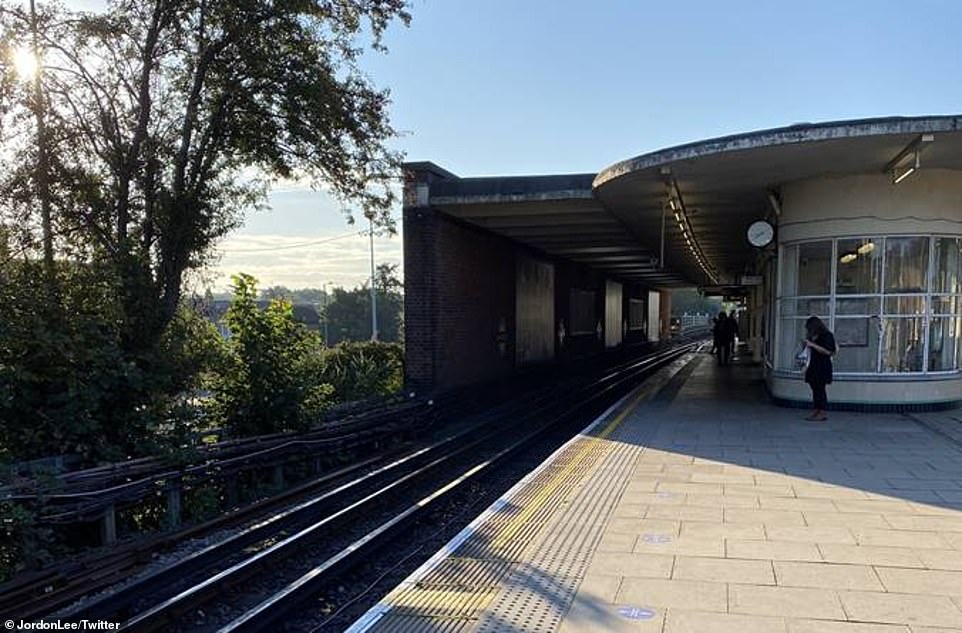 A mostly empty platform in East Finchley on the North Line of the London Underground around 7.45am this morning 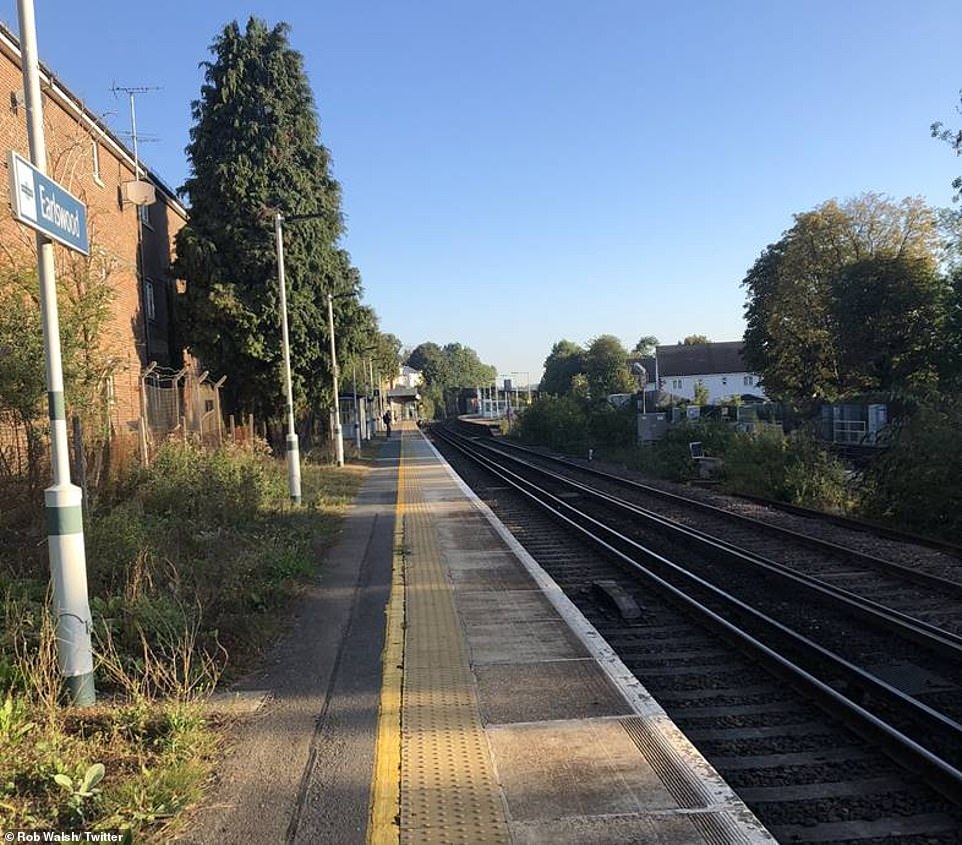 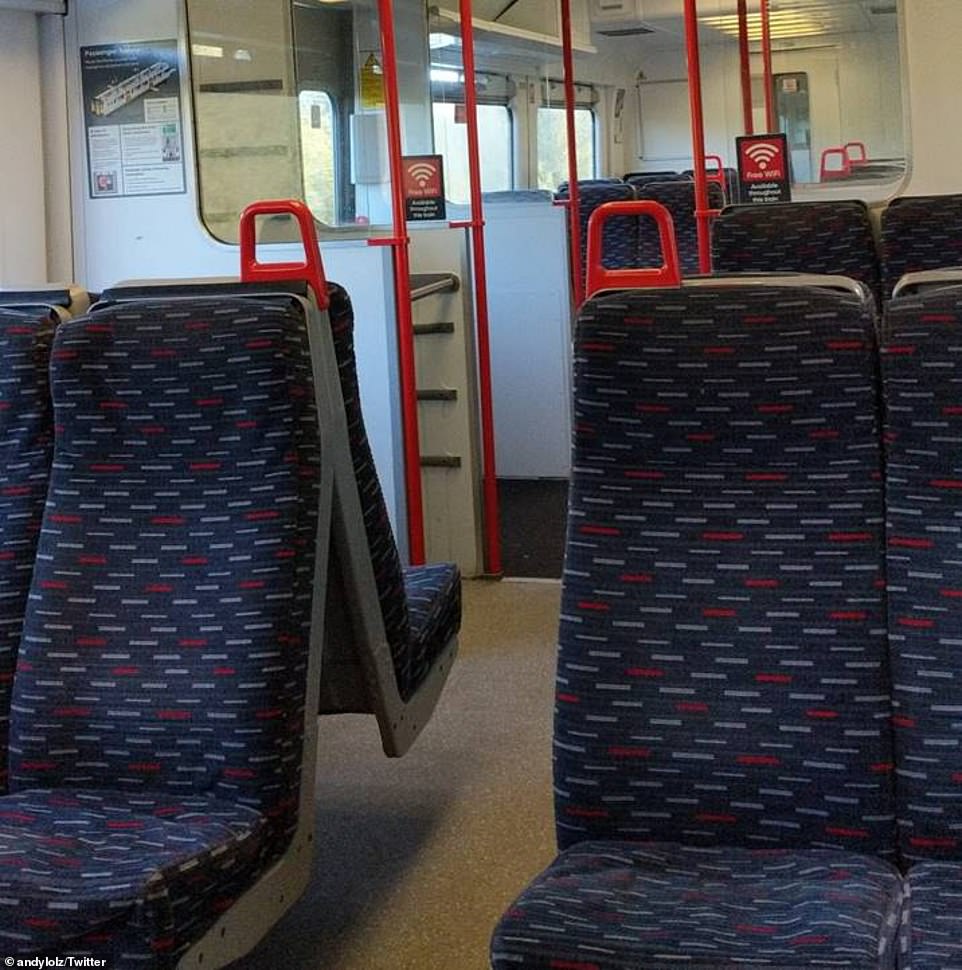 Andy Lulham photographed an empty train in Greater Anglia at 8 a.m. today and said he "missed the early train to London and had to take the busy one".

And insurance giant Aviva expects the number of desks to double in the coming weeks.

Former Tory leader Sir Iain Duncan Smith said, "The government needs to lead the way and tell officials and companies to get back to work."

Derek Ray-Hill of Cities Restart – a company launched next month to get people back to work – said, “Executives need to put on a mask, wash their hands and get back to work.

"You can't wait for someone else to take the lead."

It comes after last week's numbers showed that only 17 percent of employees in the 63 largest cities are back to work. Capita and BP did not respond to requests for comment.