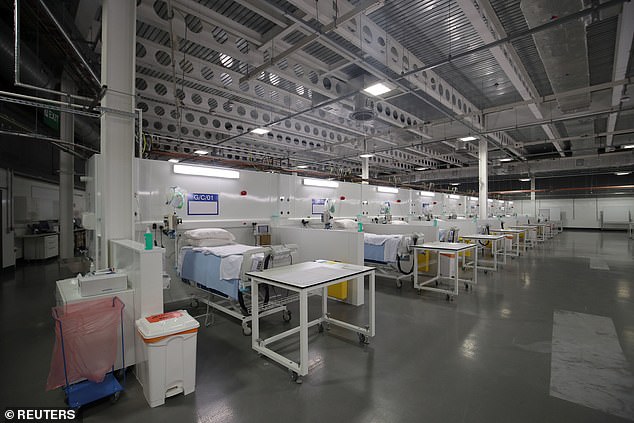 
Lockdown killed two out of three people who had died from the coronavirus. These are shocking new government figures.

Up to 16,000 people are believed to have died because they did not receive medical care between March 23 and May 1.

Over the same period, 25,000 Britons died from the virus.

The new figures were presented to the government's emergency scientific advisory group (Sage) in mid-July.

The 16,000 people who died included 6,000 who did not go to A&E during the lockdown because they feared contracting the virus.

Another 10,000 people are said to have died after early discharge from hospital and lack of access to care in nursing homes.

Another 26,000 people could die from the restrictions by next month, while a total of 81,500 people could lose their lives due to the virus over the next 50 years.

It would do this through waiting longer for non-urgent care and because of the impact of the recession caused by the pandemic.

It comes after a district nurse warned that people with treatable cancers will die from government "scare tactics" and an over-cautionary reduction in NHS services.

1,400 people could die in the next five years from being diagnosed with cancer too late.

The 16,000 people who died included 6,000 who did not go to A&E during the lockdown because they feared contracting the virus 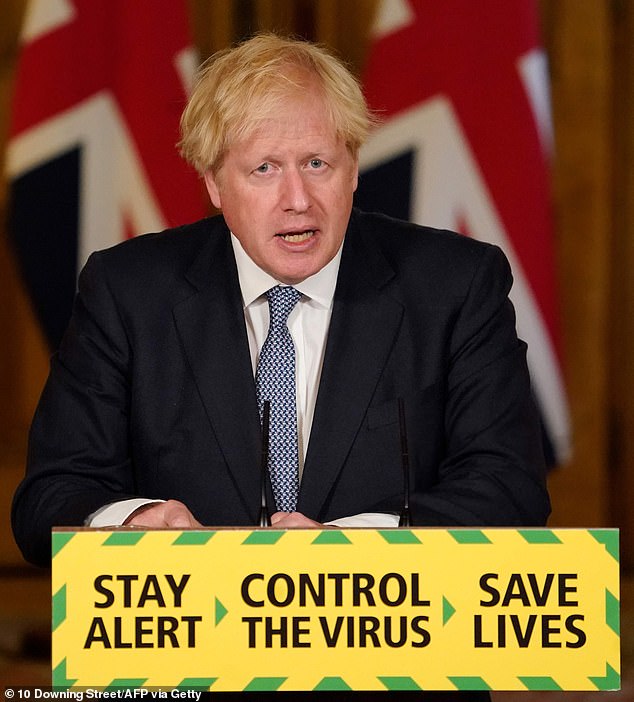 The mother of three children, 36, is diagnosed with incurable cancer after failing to see a doctor because of stomach pain while in lockdown because she “didn't want to waste her time”.

Johanna William, 36, of Burton, Staffordshire, suffered from stomach ache in April but didn't see her GP because she knew the NHS was "overwhelmed" by the coronavirus and "didn't want to waste her time".

A CT scan in early June confirmed the cook had two tumors in her adrenal gland that spread to the liver, kidney, and spleen – incurable fourth-stage cancer.

Ms. William said, “I didn't want to waste doctors time on stomach ache, the NHS was so busy.

In June the pain got so bad that I went to the hospital. Originally they thought it was two cysts, but after the radiologists looked at them, they confirmed it was two tumors.

“I had to wait a week to hear from the oncologist – it was a very long week.

“I was shocked, it never occurred to me that a stomachache could have been cancer. I thought maybe I ate the wrong thing, or I have an intolerance to dairy products or something. & # 39;

A previous report by the same team suggested deaths from late treatment amid the virus that could be as high as 185,000.

The government report, released in April but largely overlooked, found the The vast majority of deaths would be due to long waiting for treatment.

However, according to experts from the Ministry of Health and Welfare, the Office of National Statistics, the Ministry of Actuaries and the Ministry of the Interior, up to 25,000 deaths would have occurred due to delays in health care in the first six months.

The numbers correspond to an unnecessary loss of nearly a million years of life in the worst case described in the report.

And Oxford University found a few weeks ago that between March and May there were 5,000 fewer heart attack patients in the hospital.

The report said: "The suspension of" non-urgent "care is likely to have short-term health effects as patients who do not receive treatment have a reduced quality of life if they do not receive these health services.

Long-term, without treatment, their condition is likely to get worse and some may die sooner than usual.

It added that the longer the priorities of the services are removed, the greater the impact on the country's health.

The estimates were based on the fact that 75 percent of compulsory voting was canceled within six months without normalcy being quickly restored.

In more positive news, it is estimated that the lockdown could have prevented 2,500 deaths.

The new report is the latest to highlight the impact of the lockdown on the British amid proposals for another national lockdown in winter during a possible second wave.

Medical organizations have consistently warned of the long-term dangers of lockdown and concentration of much of the NHS on the coronavirus. 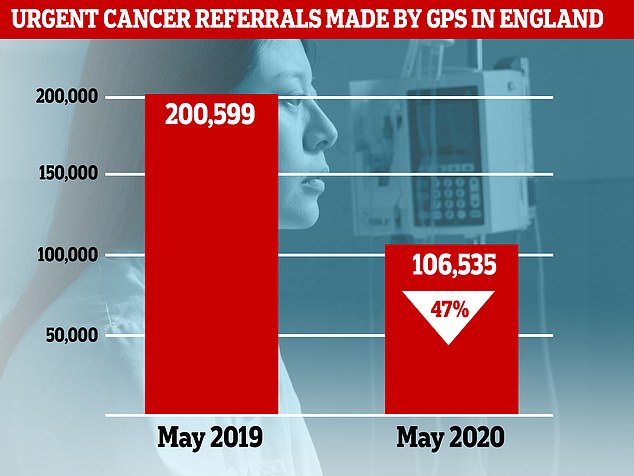 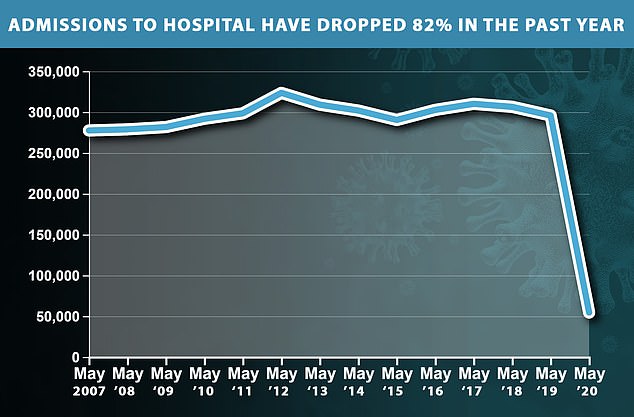 The number of NHS patients admitted for routine surgery drops 82 percent in one year: the number of admitted patients fell to 54,550 in May of this year, the lowest record ever and a drop of 295,881 in May 2019

Professor Neil Mortensen, President of the Royal College of Surgeons in England, warned that the health service "must never again be a pure coronavirus service".

He told the Telegraph, “We need to deal with the clinically most urgent patients first and then, as soon as possible, with those who have waited the longest.

& # 39; The time leading up to August and September is critical to making progress before routine winter pressures arise. 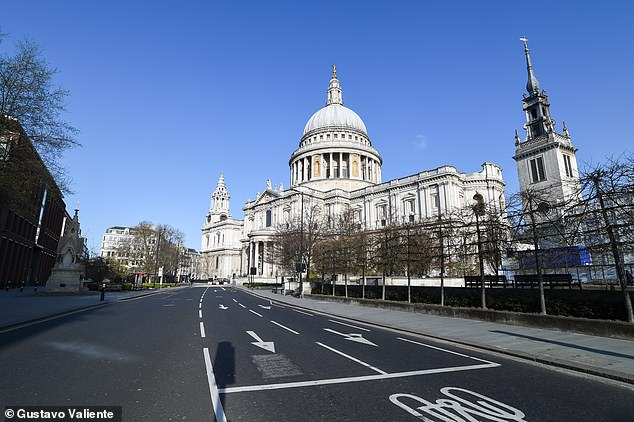 The new report is the latest, highlighting the lockdown's impact on the British, with proposals for another national lockdown in the winter

Coronavirus reproduction rates could now be as high across the UK as it was after a slight spike last week, government scientific advisors warned today amid fears the virus could resurgence.

SAGE estimates that the R-value – the average number of people each Covid-19 patient will infect – is now between 0.8 and 1.0, compared to last week's prediction that it was between 0.8 and 0.9 was. Experts say the R has to stay under one or governments risk losing control of the epidemic and the virus could spiral out of control.

SAGE said there are now initial signs that the coronavirus is on the rise, which has fueled fears that a second wave of the virus is making its way across the country. 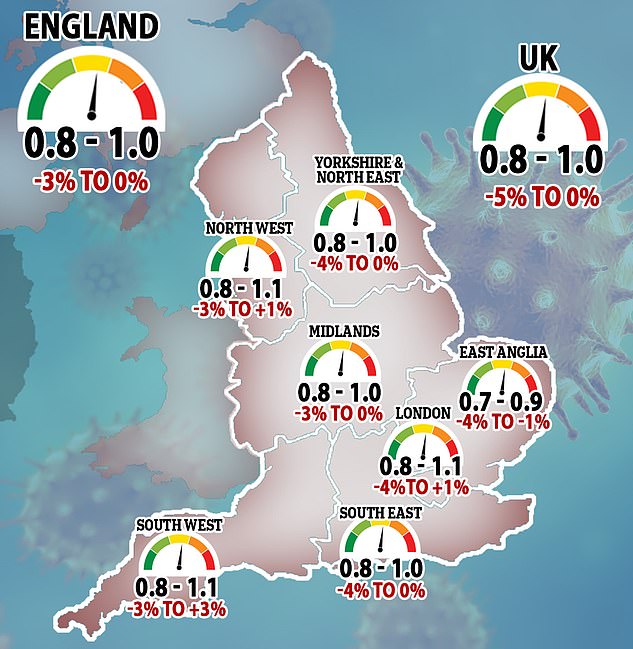 SAGE estimates that the R-value – the average number of people each Covid-19 patient will infect – is now between 0.8 and 1.0, compared to last week's prediction that it was between 0.8 and 0.9 was 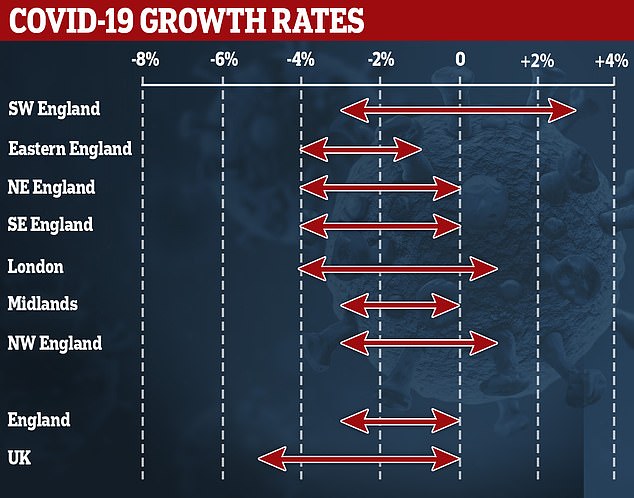 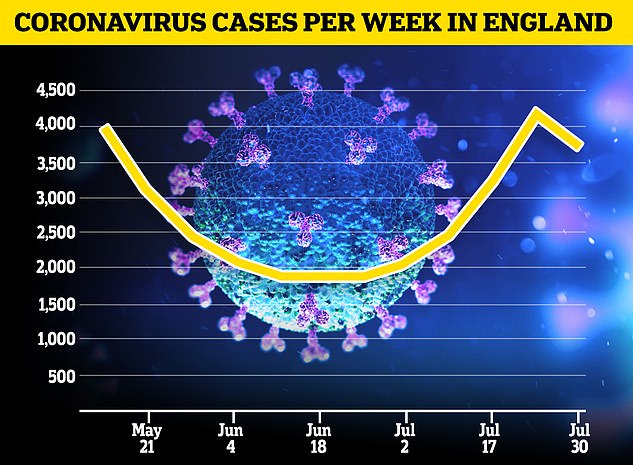 The Office for National Statistics (ONS), which measures the size of the outbreak by wiping thousands of people, now estimates that 3,700 people are infected with Covid-19 every day in England. It's 12 percent lower than the 4,200 the government agency's estimate made last week when they warned there was "enough evidence" to prove the cases were spiraling 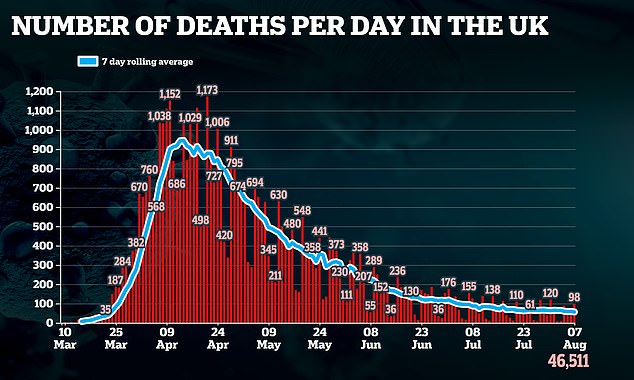 Officials announced today that an additional 98 patients who tested positive for the infection have died. This brings the official number of victims to 46,430 since the crisis spiraled out of control in February

However, it cautioned that the R is more volatile when transmission is as low as it is now in the UK – fewer than 1,000 people diagnosed each day. This means that it can be pushed up by local clusters of infection observed in Aberdeen, Scotland and parts of the north west of England.

Despite the spike, separate government data today suggests that cases may actually decline again after weeks of rebound. The Office for National Statistics (ONS), which measures the size of the outbreak by wiping thousands of people, now estimates that 3,700 people are infected with Covid-19 every day in England.

It's 12 percent lower than the 4,200 the government agency's estimate made last week when they warned there was "enough evidence" to prove the cases were spiraling. The spike in cases prompted Boris Johnson to state that he hit the brake pedal to ease the coronavirus blockage.

There has been some confusion as to whether the virus is actually returning, and prominent scientists warned the data merely reflect an increase in testing in areas affected by outbreaks of the disease.

Five thousand heart attack sufferers in England have missed life-saving hospital treatment due to the Covid-19 pandemic, a study claimed a few weeks ago.

The researchers analyzed the data from the NHS hospital to show that around the height of the crisis in late March, admissions were 35 percent lower than usual.

Up to a quarter of people who have had the most serious heart attack – a complete blockage of an artery – didn't seek help, the numbers say.

According to researchers at Oxford University, approvals are now picking up again as the coronavirus gets out of hand.

However, patient confidence is nowhere near as high as it was before Covid, as Brits still fear getting the coronavirus if they go to the hospital. 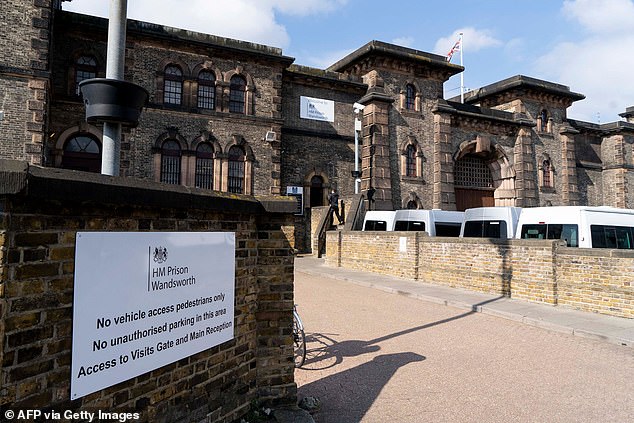