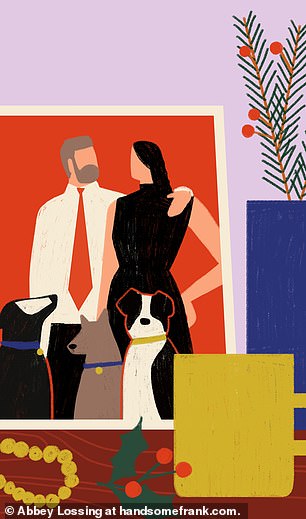 By Liz Jones Diary for The Mail on Sunday

I feel a little tearful. It has to be the time of year: almost Christmas, and as a woman, we all want it to be perfect when it's far from it.

I managed to install a heater in the Yorkshire cabin. I have ordered a new fridge and dishwasher. Unfortunately, John Lewis told me that I can't have my new sofa until January. It's like the last straw. I start to cry. Stupid, I know.

& # 39; No. I am not ok. I think I'll heat up in time for Christmas, and a fridge and dishwasher, and the oven will be fixed. But I don't think there is anything to sit on. "

When I owned my Georgian house in Swaledale, I saved two years to buy a stove, fridge, and dishwasher. Until then, I kept my crémant in a water bucket by the back door – priorities, ladies, priorities. I was so excited when all the devices finally showed up. To be able to make something to eat. I felt like an adult that my life was on the right track again. Then I went bankrupt and lost everything. I paid eight giants for my two giant pink velvet chesterfields from the Conran shop, but sold them on eBay for £ 400 each as they wouldn't fit in the cabin. I wrote to David: "It's so difficult. Have to start over. Again."

"I know," he replied. "It's heartbreaking. Why don't we get your mother's sofa and chair out of the garage … use it?"

& # 39; Yes ok. They need to be fixed. The feathers and back are gone. I could cover her with pillows – unless Gracie ate them. "

It's so nice to have someone on my side. When I announced my new book and tour in this column, I had hundreds and hundreds of emails from readers. But only one text from a member of my own family. How is that possible? I assume it is Christmas that makes me think of my family: my dear late mother, who is stirring endlessly dried fruit and is worried about what she could afford to buy her seven children. What she would feed us on

But she always did it: we ate ourselves at a mysterious creature called Kapaun, never at a turkey.

The best gift I ever received was a cardboard stocking with makeup No. 7 at the age of 13 or 14. Foundation! Makeup meant that I could finally leave the house and look boys in the eye. Cover up the acne. Erase my facial features. I never thought about what my mother must have sacrificed to buy this gift set for me (we were a family that bought shampoo and conditioner in bags, never in bottles).

Christmas is a time when we inevitably take stock. How many people love us How many people want to spend time with us? How happy will we be? How many gifts do we have to open? How exactly does life go? Oddly enough, at this time of year, I always think of George Michael who died on Christmas Day. I had known him for years and took part in his first outing as a Wham! in a theater on the beach. His publicist – I think she was also Greek – called me and said, "George says," How is Leeez ?! "" I met him a few years ago. He knew I had gone through the mill. He said to me: “When we were having dinner in Hampstead when I was just becoming a star, you were the only person who got out your check book. Everyone else let me pick up the bill. “Poor George. I know exactly how he felt.

I remember sitting in my office a few years ago and two of my sisters coming in. You liked to team up with me. "You will die as a lonely old woman," one of them said to me.

But, you know what? I might not be lucky enough to have children or a husband or a sofa. But I have my animals. I have David. He really loves me, you know, although God knows why he stayed here during bankruptcy and I kept his mistakes visible to everyone. Airing our dirty laundry (I now have a tumble dryer – yay!). I was a bitch. It does fear to you. But David held on like a limpet. I continue the nautical analogy and refuse to drown. Not only will I swim, I will also swim the English Channel. I am determined to have a wonderful holiday season.

I hope you too.

Please do not hesitate to contact Liz via lizjonesgoddess.com