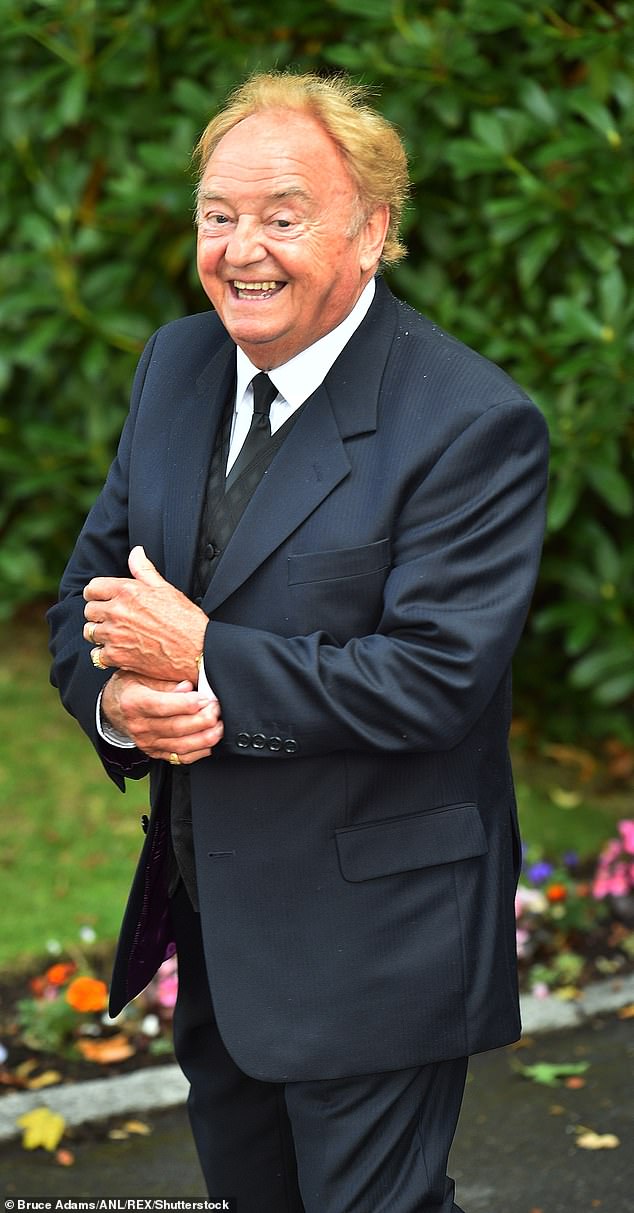 
Gerry Marsden died at the age of 78 after a brief illness.

The front man of Gerry And The Pacemakers, who is known to sing "You'll Never Walk Alone", suffered an infection in his heart, it was announced on Sunday.

The news was spread by Gerry's friend, radio host Pete Price, who jointly shared a photo of the couple.

Sad news: Gerry Marsden died at the age of 78 after a brief illness [picture 2015]

Pete, 74, tweeted: "After speaking to the family, it is with a heavy heart that I have to tell you the legendary Gerry Marsden MBE after a brief illness that was an infection in his heart sadly passes.

I send all the love in the world to Pauline and his family. You will never walk alone. & # 39;

Gerry is survived by Mrs. Pauline Marsden, whom he married in 1965.

The couple have two daughters, Yvette and Victoria. 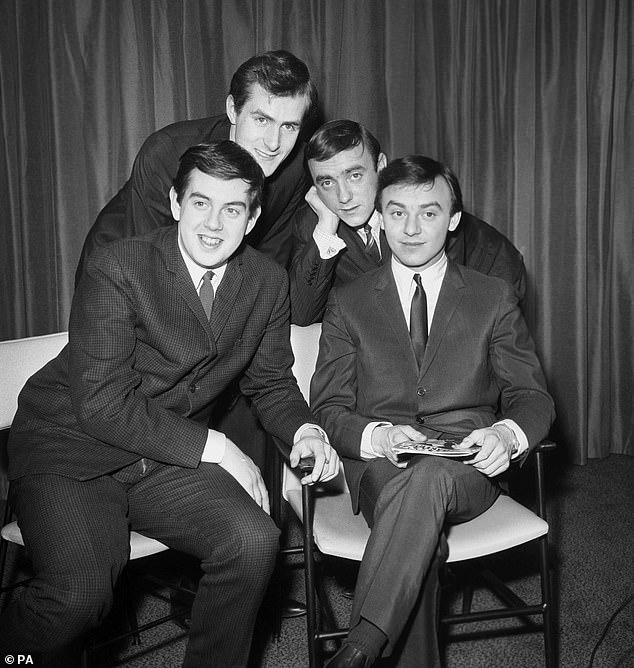 Pictured: Gerry and the Pacemaker in London in 1964. Les Maguire, Freddie Marsden, Gerry Marsden and Les & # 39; Chad & # 39; Chadwick are pictured 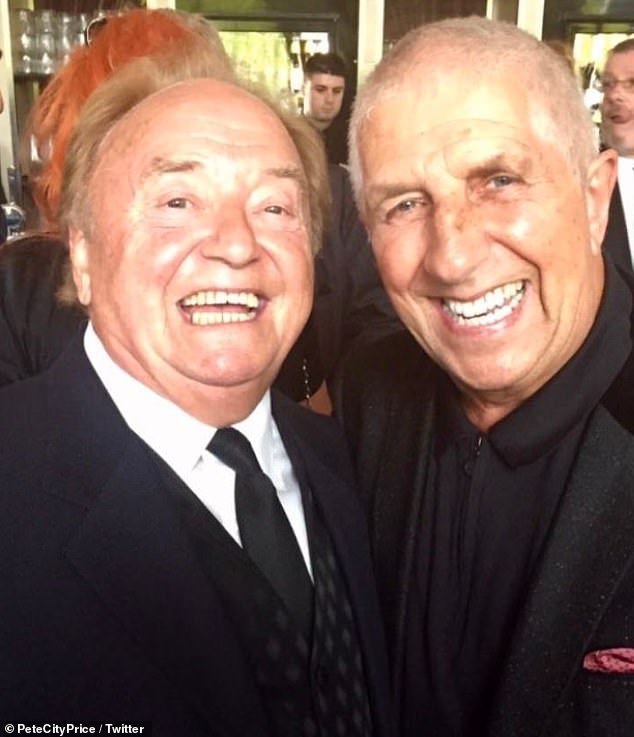 Heavy heart: The news was spread by Gerry's friend, radio host Pete Price, who shared a photo of the couple together [Pete, 74, pic R]. 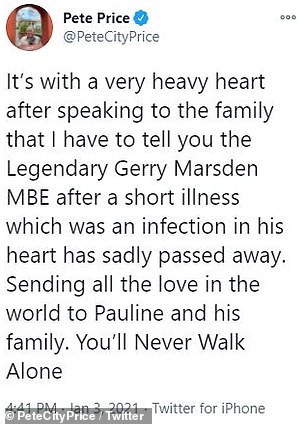 Announcement: Pete tweeted the news to his social media followers on Sunday

Gerry underwent triple heart bypass surgery in 2003 before undergoing a second heart surgery in 2016, and eventually had his own pacemaker, which he once joked wasn't "funny" given his band's name.

When asked last year if he thinks it's ironic that his band is called The Pacemakers, Gerry replied: & # 39; No. I'm wearing one, for God's sake! "

At the time of writing, Gerry's family has not publicly commented on his death.

Gerry And The Pacemakers became famous for their 1963 hit "You'll Never Walk Alone", which led the band's local soccer club, Liverpool FC, to adopt it as one of their traditional chants.

It is sung by many fans to this day and was used as an anthem across the UK and Europe in 2020 in support of medical staff, first responders and the isolated during the COVID-19 pandemic. Long-term love: Gerry is survived by Mrs. Pauline Marsden, whom he married in 1965 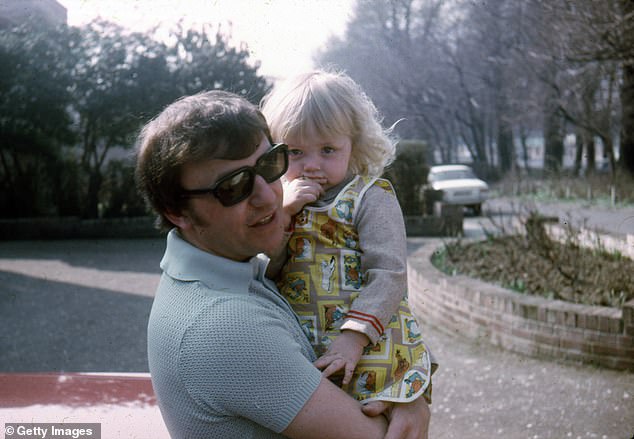 Father of two children: the couple has two daughters, Yvette and Victoria [picture 1967] 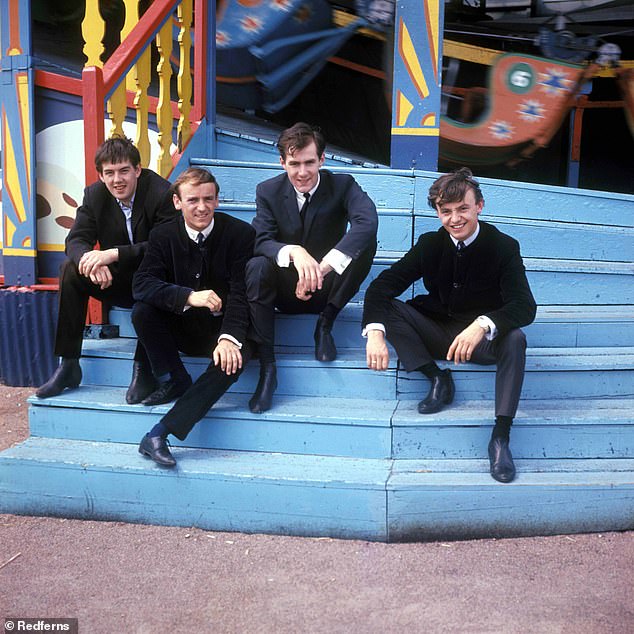 Swinging Sixties: Gerry also had success with hits like I Like It, How Do You Do It and Ferry Across The Mersey [pictured in 1960].

Gerry also had success with hits like I Like It, How Do You Do It and Ferry Across The Mersey – the latter a nod to Mersyside, where the band originated.

The band was the first act to reach number one in the UK charts with their first three single releases.

Gerry was part of the band with his brother Freddie Marsden, along with Les & # 39; Chad & # 39; Chadwick and Arthur McMahon. They were encouraged to compete with the Beatles in their early days. The band was actually signed by Beatles manager Brian Epstein. 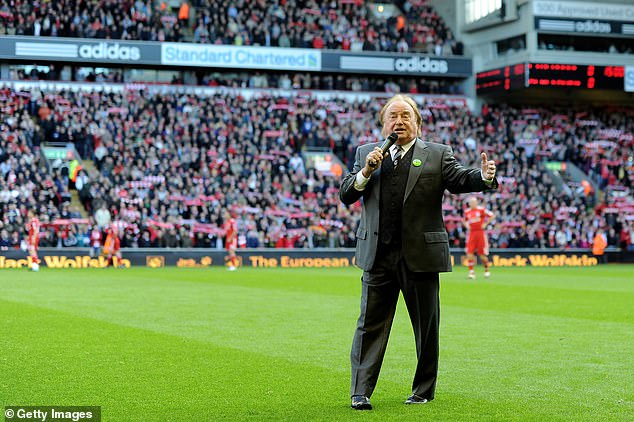 Gerry And The Pacemakers became famous for their hit "You Never Walk Alone" in 1963, which led the band's local football club, Liverpool FC, to adopt it as one of their traditional chants [Gerry sings it in 2010] 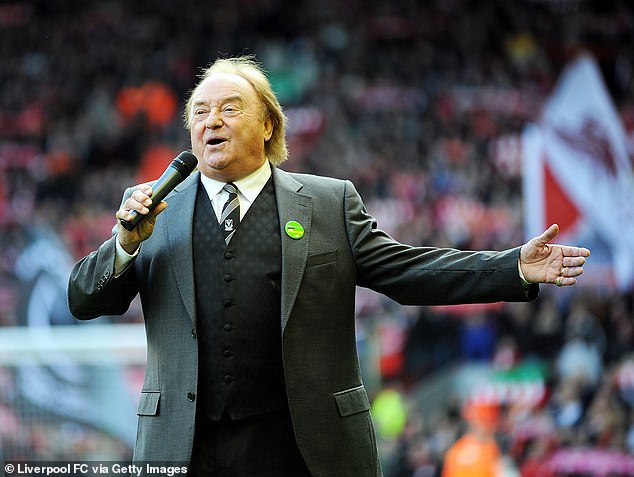 It is sung by many fans to this day and was used as an anthem across the UK and Europe in 2020 in support of medical staff, first responders and the isolated during the COVID-19 pandemic [Gerry joins the singing 2010] 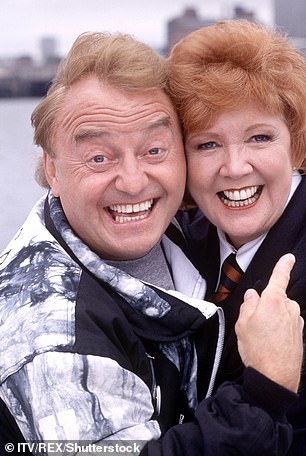 He left the band when they broke up in 1967. The Pacemakers reformed again in 1973, without Freddie, who had been running a driving school until then.

They were reformed in 1993 to celebrate 30 years of the band.

Gerry has been a fixture on television and on the West End stage. In November 2018, he gave up show business. 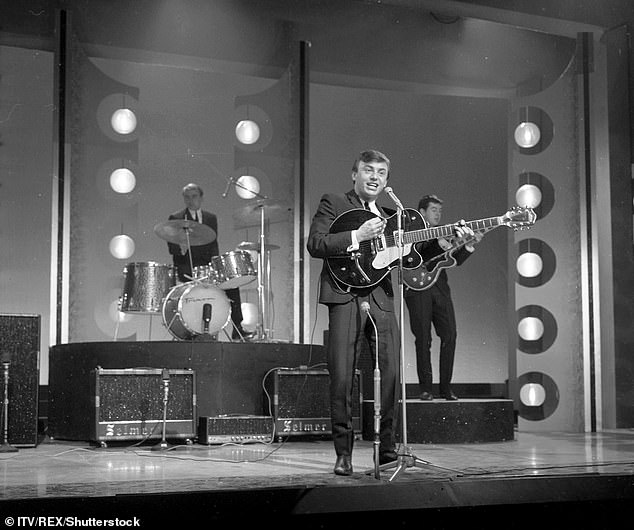 The band was the first to reach number one in the British charts with their first three single releases [pictured 1963]. 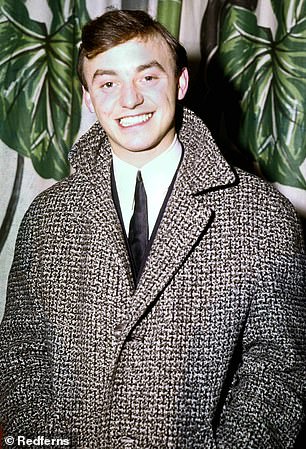 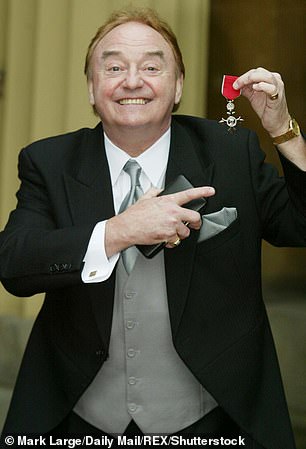 Career: Gerry's career lasted from the 1960s [L picture] until his retirement in 2918. Gerry received an MBE in 200 [R] for services to Liverpudlian Charities at Buckingham Palace.

In 2003 he received an MBE for Services to Liverpudlian Charities at Buckingham Palace along with two of his bandmates.

When Prince Philip gave the honor, he said it was nice to see the three old singers together again. Gerry replied famously: "Not so much from the old man!"

When the news broke on Sunday, tributes poured in for Gerry, including one from ex-Liverpool FC CEO Peter Moore. 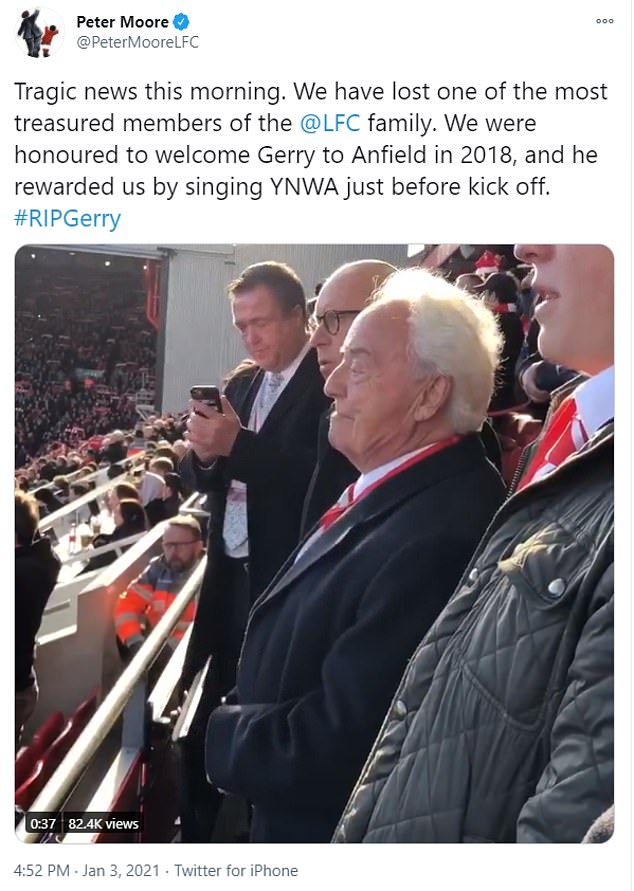 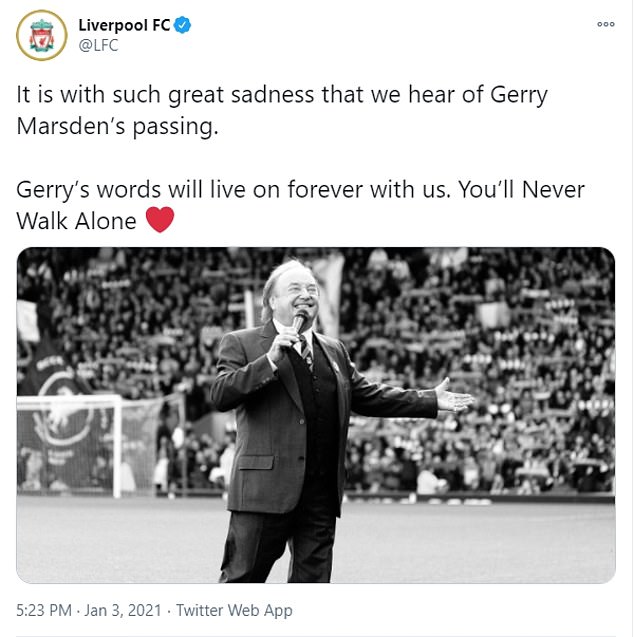 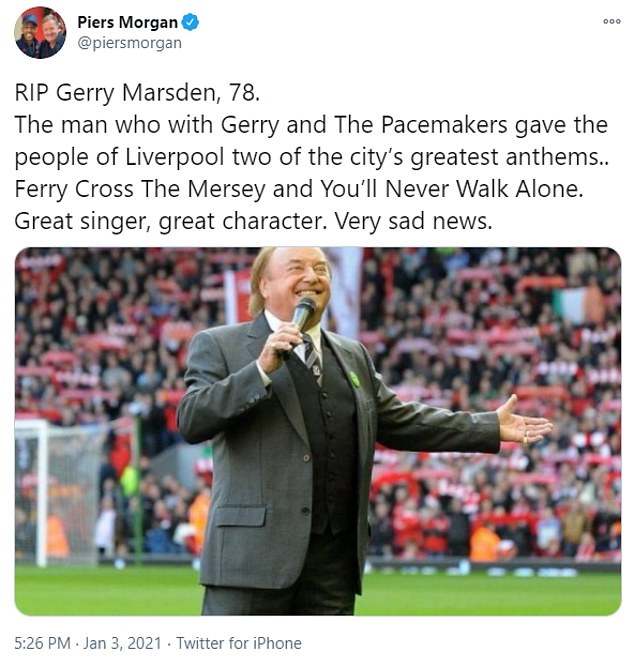 “Tragic news this morning. We lost one of the most precious members of the @LFC family. We were honored to see Gerry in Anfield in 2018 and he rewarded us by singing YNWA just before kick-off. #RIPGerry & # 39; was his tweet.

Liverpool FC repeated this on Twitter, writing: "It is with such great sadness that we hear of Gerry Marsden's death. Gerry & # 39; s words will live on with us forever. You will never walk alone. & # 39;

Piers Morgan tweeted: & # 39; RIP Gerry Marsden, 78. The man who gave two of the city's biggest anthems to the people of Liverpool, Gerry And The Pacemakers. Ferry cross the jersey and you will never walk alone. Great singer, great character. Very sad news. & # 39;

In 2017, while performing with his band on stage, Gerry collapsed dramatically and fell flat on his back in front of shocked fans while singing Peaceful Easy Feeling by The Eagles. Long-term star: Gerry is pictured on the Mersey ferry in 2009 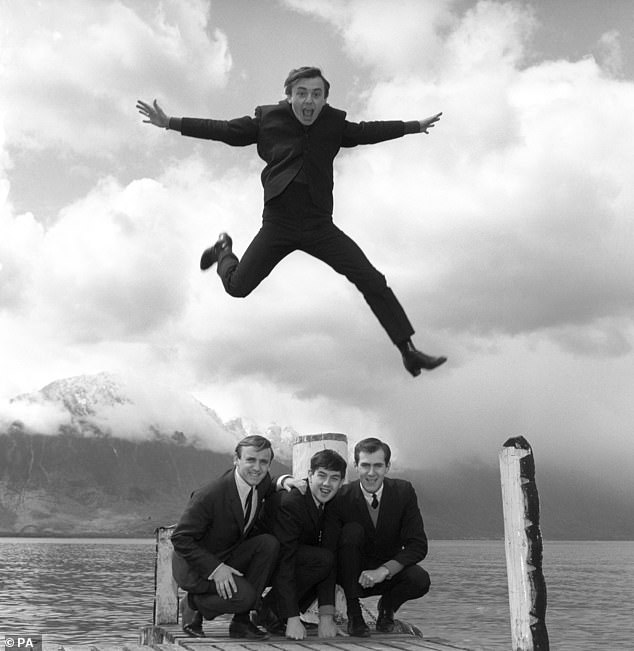 Icons: Gerry jumps over his supporting pacemaker in 1964

The concert was taking place in Newport, South Wales at the time as part of his UK tour.

He is said to have looked "visibly shaken and painful" by those in attendance and apologized to the concerned audience before leaving the stage – as the rest of the band continued with the Gerry Cross The Mersey Show.

One viewer said at the time: “When a song ended, Gerry turned away from the audience, stumbled and seemed to lose his balance. 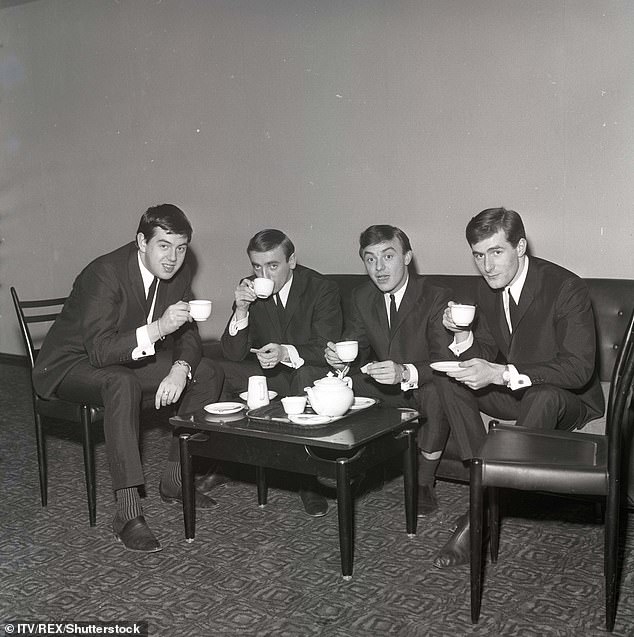 Tea for four: The band is shot behind the scenes on the TV show "Sunday Night At The Prince Of Wales" at Christmas time 1963 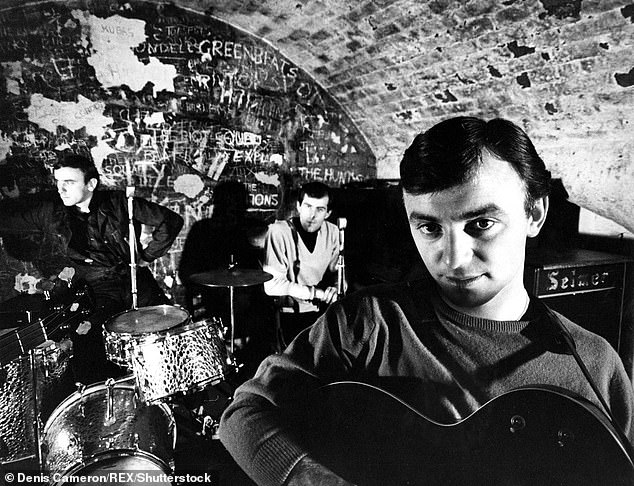 Rivals? Gerry's band had the tip of keeping up with the Beatles in their early days. The band was actually signed by Beatles manager Brian Epstein [pictured in The Cavern in the 1960s]. Behind the scenes: Gerry is pictured during rehearsals for Jeremy Summers & # 39; musical film Ferry Cross The Mersey in 1965 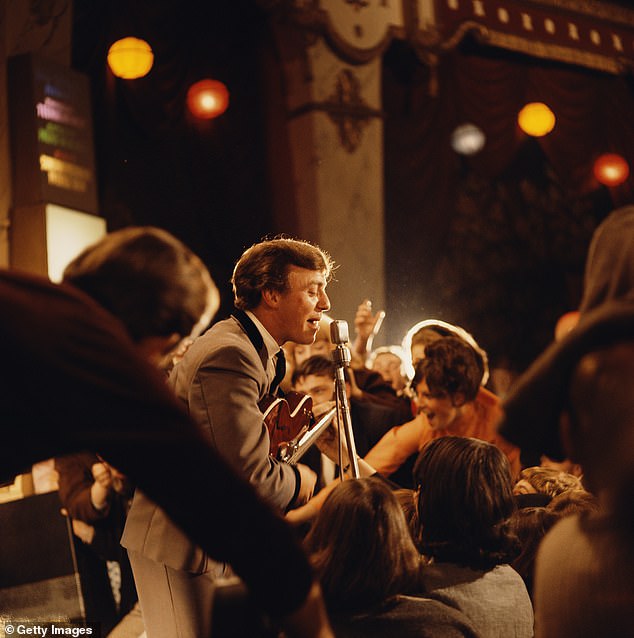 Much missed: The band performed in Ferry Cross The Mersey in 1965

When the stage worker and a band member helped him get up, Gerry looked visibly shaken and painful. He apologized to the audience and stated that he would have knee surgery next week and that he was hoping to make it through the show.

He apologized again and was led away from the stage hand when the audience gave him applause. "The band wished him all the best before announcing that the show had to go on before it kicked off with the Love Affair hit Everlasting Love."

It was the following year that Gerry decided to step back from the limelight.