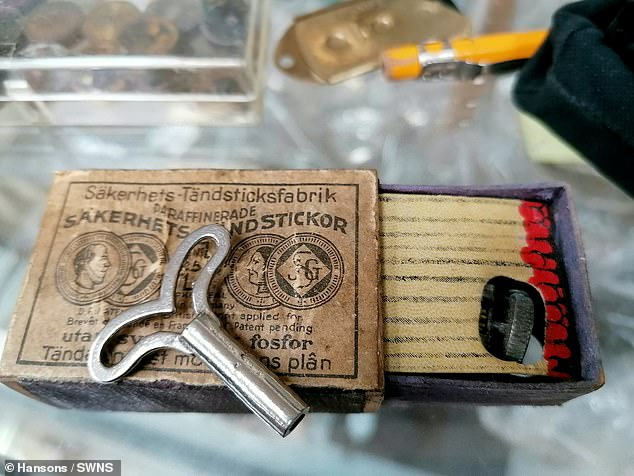 
A collection of James Bond style gadgets used by British spies during World War II goes under the hammer.

The fascinating array of deadly weapons and navigation tools began to be camouflaged as an everyday item from the 1940s onwards.

The items collected by a spy fanatic over the past 40 years are expected to fetch hundreds of pounds at Hansons Auctioneers.

A collection of James Bond-style gadgets used by British spies during World War II goes under the hammer (pictured, an incendiary device disguised as a matchbox) 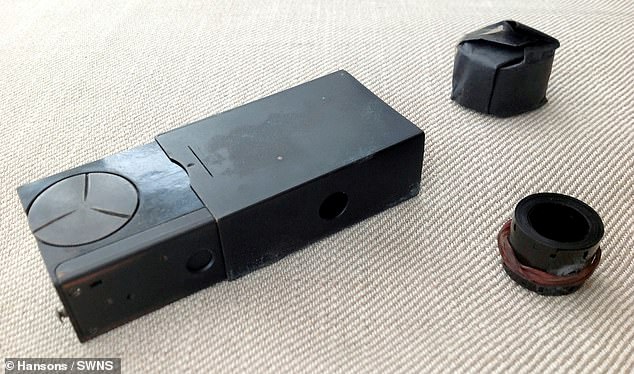 The fascinating array of deadly weapons and navigation tools was camouflaged as an everyday item from the 1940s (pictured, a camouflaged camera in a matchbox). 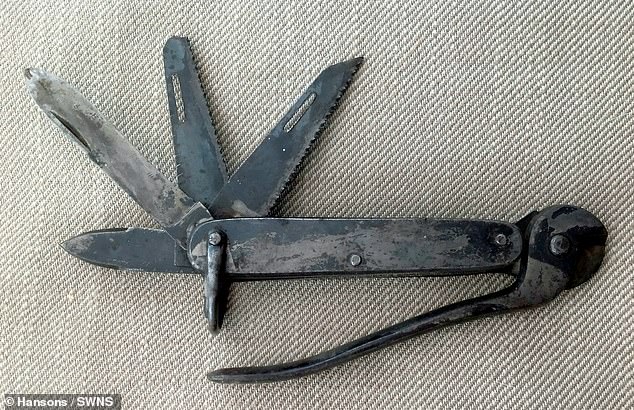 The spy collection, including this Swiss Army Knife with a blade, three saws, a lock pick and a wire cutter (pictured), will go under the hammer on November 20th 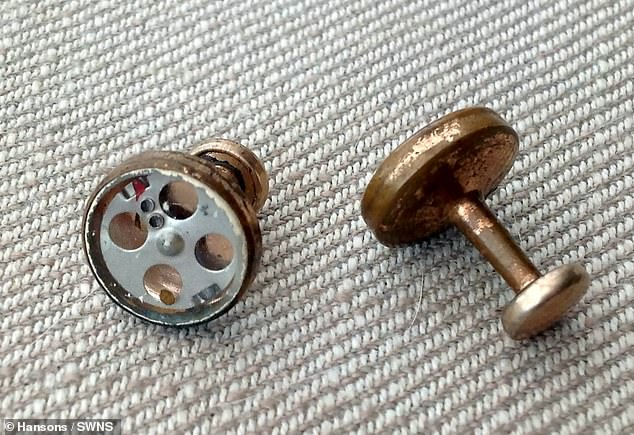 Other useful devices are compasses hidden in buttons (figure) 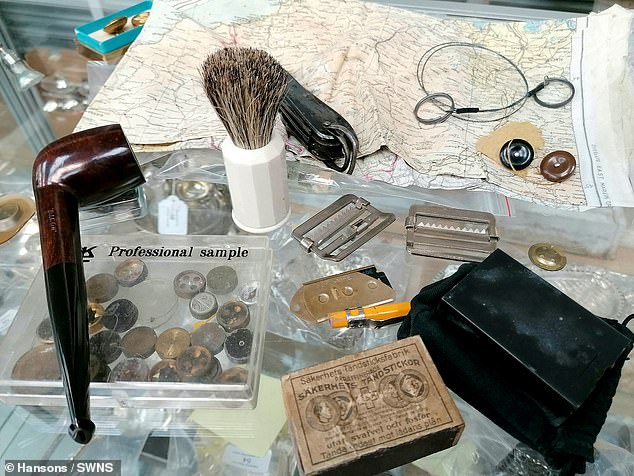 One of the devices in the collection is a mini fire device cleverly hidden in a fake matchbox.

There was also a tiny covert camera that was supposed to fit in a matchbox given to secret agents working behind enemy lines.

A Swiss army knife with a blade, three saws, a lock pick and a wire cutter was ingeniously disguised as a pipe.

Other useful devices include compasses hidden in buttons and a razor blade that points north when placed on water.

The spy collection will go under the hammer on November 20th.

Militaria expert Adrian Stevenson said: “The ingenuity of the British cannot be criticized when it comes to thwarting the enemy. 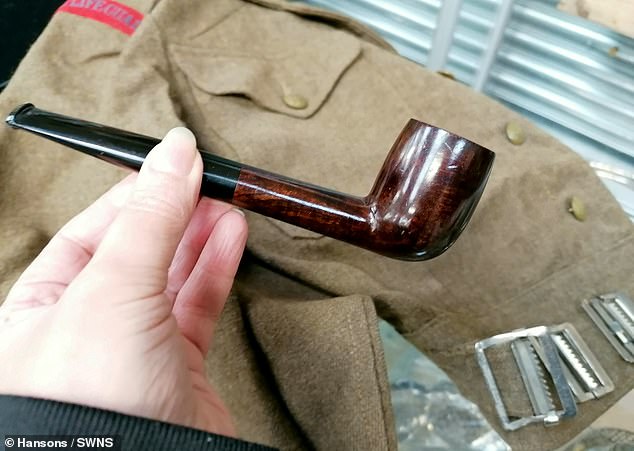 A Swiss army knife with a blade, three saws, a lock pick and a wire cutter was ingeniously disguised as a pipe 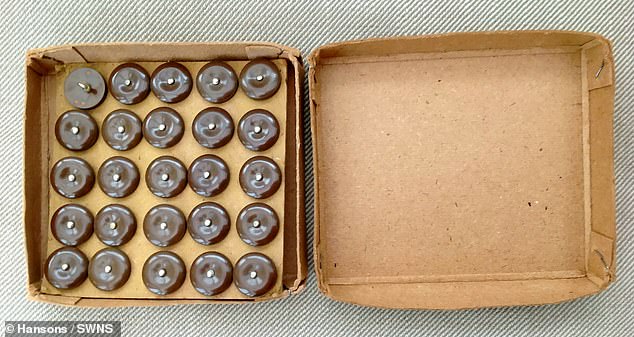 A box of compass buttons for combat clothing (pictured). The devices were handed over to SOE agents (Special Operations Executive) to carry out espionage

Items include an incendiary device disguised as a matchbox, loads of hidden compasses, a camera in a matchbox, and a utility knife with razor-sharp blades.

"The utility knife is equipped with three small hacksaw blades, a tire slitter and a wire cutter." 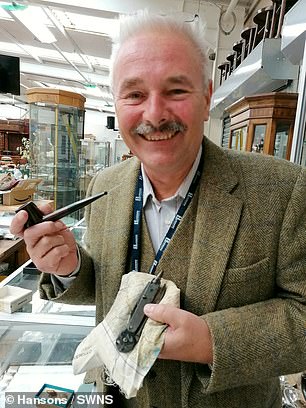 Militaria expert Adrian Stevenson said: "The ingenuity of the British cannot be criticized when it comes to thwarting the enemy" (picture)

He added: “Compasses were important tools for guiding agents parachuted into enemy territory during a conflict.

& # 39; Consequently, hidden compasses can be found in all types of everyday items in the collection.

“They are hidden with pencils and hidden in collar buttons and buttons. Escape compasses could become part of a soldier's uniform. & # 39;

The devices were built between 1939 and 1945 by real Q characters in the top secret MI9 section of the War Office.

They were then turned over to SOE (Special Operations Executive) agents to carry out espionage, sabotage and reconnaissance missions in Nazi-occupied countries.

These would connect to a resistance cell and organize escape and evasion efforts, usually after being informed by the resistance of the presence of downed airmen. 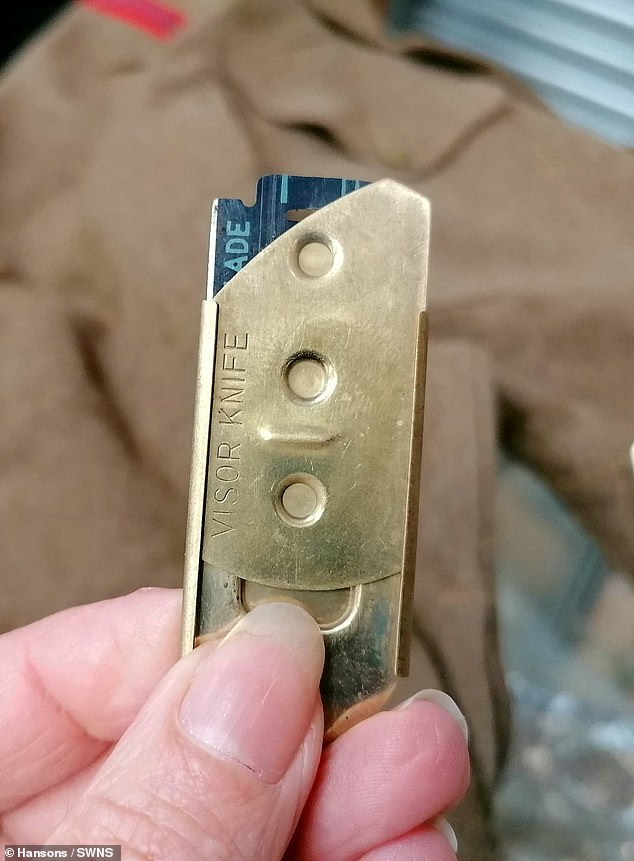 One of the items for sale is this razor-blade knife (pictured). The devices were built by real Q characters in the top secret MI9 section of the War Office 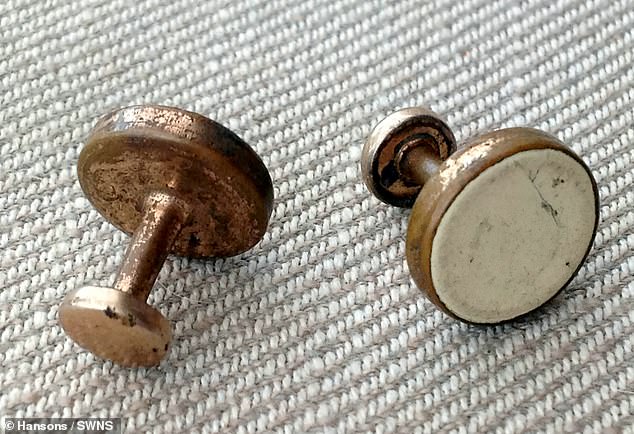 Collar buttons in which compasses were hidden (picture). Many spy devices were based on the ideas of Christopher Hutton, a Birmingham-born soldier, aviator, journalist and inventor

"The agents brought false papers, money and cards with them to support trapped service personnel."

Many escape or espionage devices were based on the ideas of Christopher Hutton, a Birmingham-born soldier, aviator, journalist and inventor.

Hutton, who died in 1965, proved so popular that he built a secret underground bunker in the middle of a field so that he could work in peace.

He printed cards on silk to keep them from rustling and disguised them as handkerchiefs and hiding them in tins.

For the crew, he even designed special boots with detachable leggings that could be quickly turned into civilian shoes, and hollow heels that held packets of dried food.

What was the Special Operations Executive?

Most of the devious espionage tactics used to outsmart Brtiain's opponents were developed by a division known as the Special Operations Executive (SOE). Their mission was sabotage and subversion behind enemy lines.

The SOE was established on July 22, 1940 by Secretary of Commerce Hugh Dalton, after cabinet approval. It was largely kept top secret and was also known as The Baker Street Irregulars due to the location of its London office and Churchill's secret army.

The SOE operated in every nation in Europe and Southeast Asia that was under the rule of an Axis power.

The SOE agents came from all walks of life, including a former chef, an electrician, several journalists and the daughter of a Brixton car dealer.

Her training included learning how to kill with bare hands, how to derail a train, and how to get out of a pair of handcuffs with a piece of thin wire and a milk pen.

SOE's first success came in June 1941 when agents blew up the French Pessac power station with some well-placed explosive charges.

The precise explosion crippled work on an important submarine base in Bordeaux and abruptly brought all-electric railroads in that region to a standstill.

By D-Day on June 6, 1944, SOE had become a dreaded organization that could attack the enemy anytime, anywhere.

In addition to the quirky inventions, the unit was also responsible for other important, more conventional items that were commonly used in war.

One of these was a time pen, a timer that allowed troops to detonate a bomb with a controlled delay to clear the area – times were typically anywhere from 10 minutes to 24 hours.

The SOE commissioned several types of silent pistols, such as the Welrod, which were key to agents trying to stay in the background.

They also produced two submarines, the Welman and the Sleeping Beauty, to be used to weigh submarines, but neither was successful.

After the war, the organization was officially dissolved on January 15, 1946. In October 2009, a memorial to SOE agents was unveiled at the Albert Embankment of Lambeth Palace in London

MI9, the British Directorate for Military Intelligence, was a division of the War Department between 1939 and 1945.

In order to help the captured Allied troops, the secret organization dedicated to working with Allied prisoners of war was established.

The RAF fighter and bomber personnel, most likely captured for a long time, were trained and equipped in advance to attempt to escape.

During the Second World War, agents, usually by parachute, infiltrated into occupied Europe.

They were tasked with supporting available European resistance networks that they would use to help Allied Airmen return to Britain if shot down over Europe.

Agents would connect with a resistance cell and organize escape efforts that bring false papers, money and cards to help the downed airmen.

The group also facilitated the escape of British prisoners of war from the prison camp and from occupied Europe.

MI9 produced various escape aids which they sent to POW camps and which were based on the ideas of Christopher Hutton.

Maintaining prisoner-of-war morale became an important part of all of their activities.

Gathering information was equally important to the work of MI9 and helped in part with the escape, knowing about the experiences of those who had already done it.