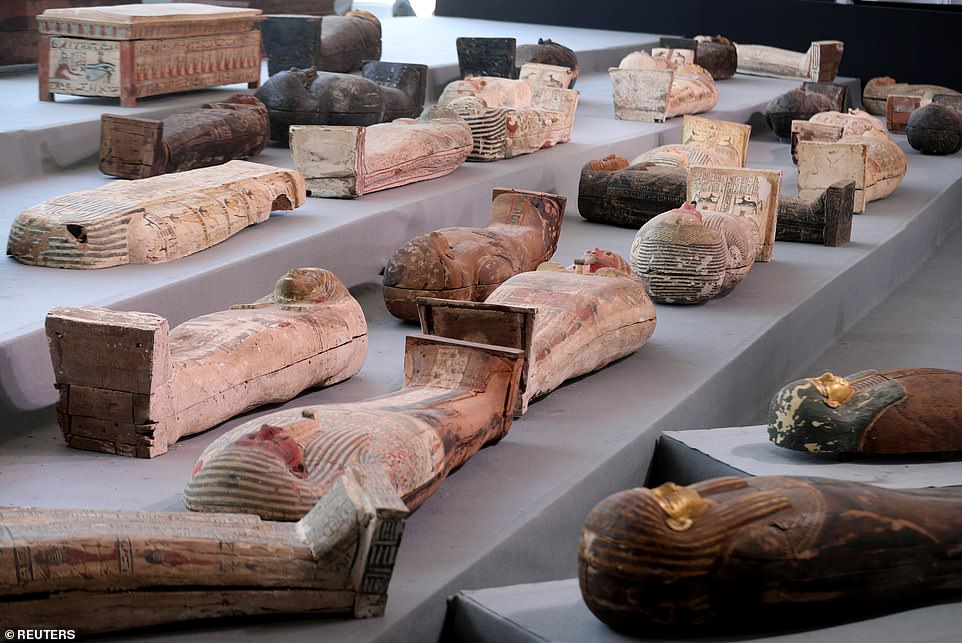 
On Saturday, Egyptian antiquities officials announced the discovery of at least 100 ancient coffins, some of which contained mummies and about 40 gilded statues in a huge Pharaonic necropolis south of Cairo.

The colorful, sealed sarcophagi and statues that were buried more than 2,500 years ago were displayed in a makeshift exhibit at the foot of the famous step pyramid by Djoser in Saqqara.

The sealed wooden coffins that were unveiled on site amid fanfares belonged to top officials of the late and Ptolemaic periods of ancient Egypt.

Sarcophagi, approximately 2500 years old, from the newly discovered burial site near the Egyptian necropolis of Saqqara, will be seen during a presentation on November 14 in Giza, Egypt 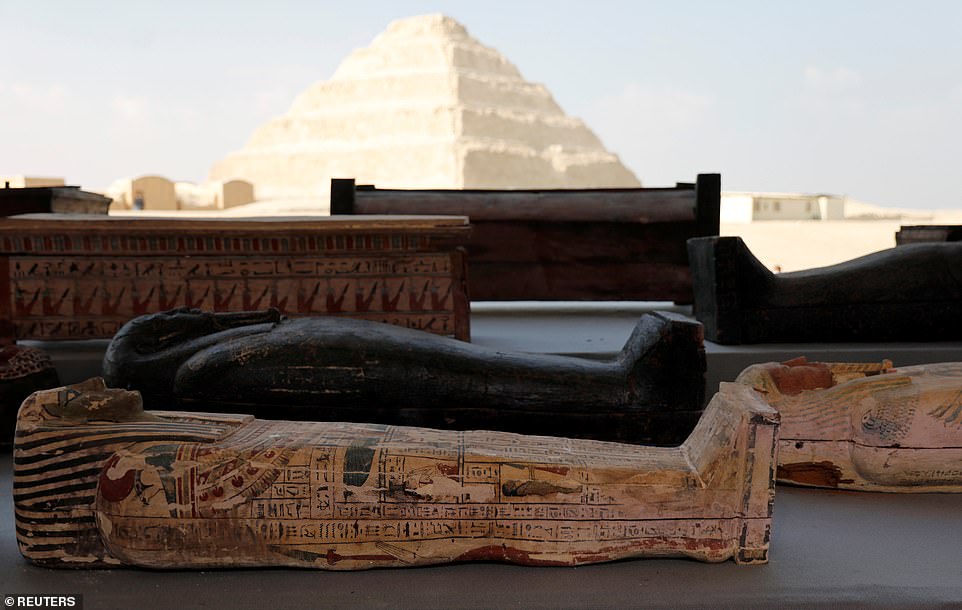 At least 100 old coffins were discovered in the huge Pharaonic necropolis south of Cairo, some of which contained mummies and around 40 gilded statues 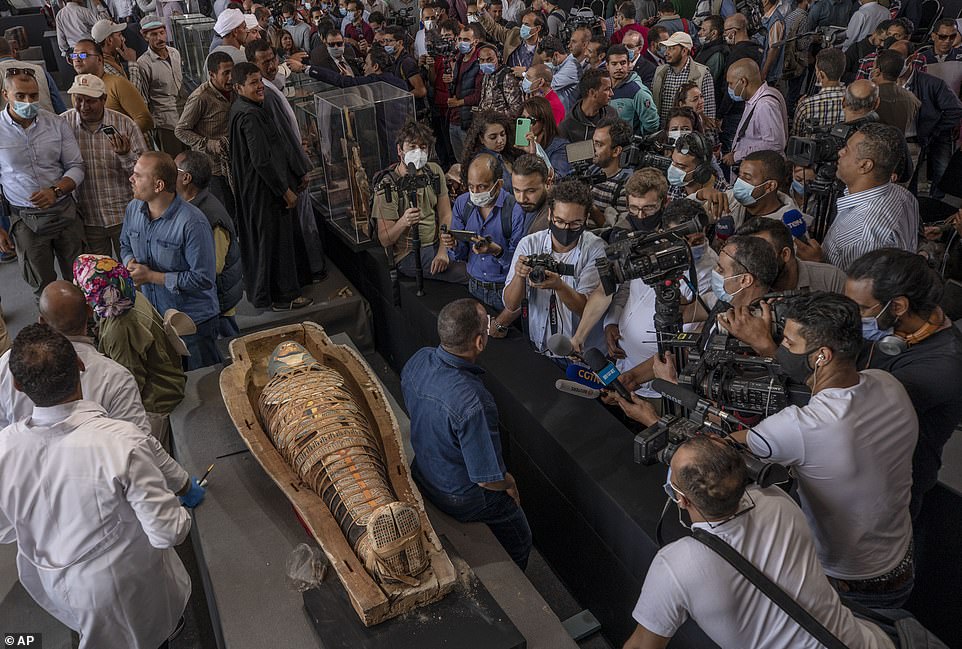 The colorful, sealed sarcophagi and statues that were buried more than 2,500 years ago were shown in a makeshift exhibition at the foot of the famous step pyramid by Djoser in Saqqara. Pictured: The press gathers to announce the discovery

They were found in three tomb shafts at a depth of 40 feet in the sprawling necropolis that was once Egypt's ancient capital, Memphis.

They also took x-rays to visualize the structures of the ancient mummy and show how the body had been preserved. 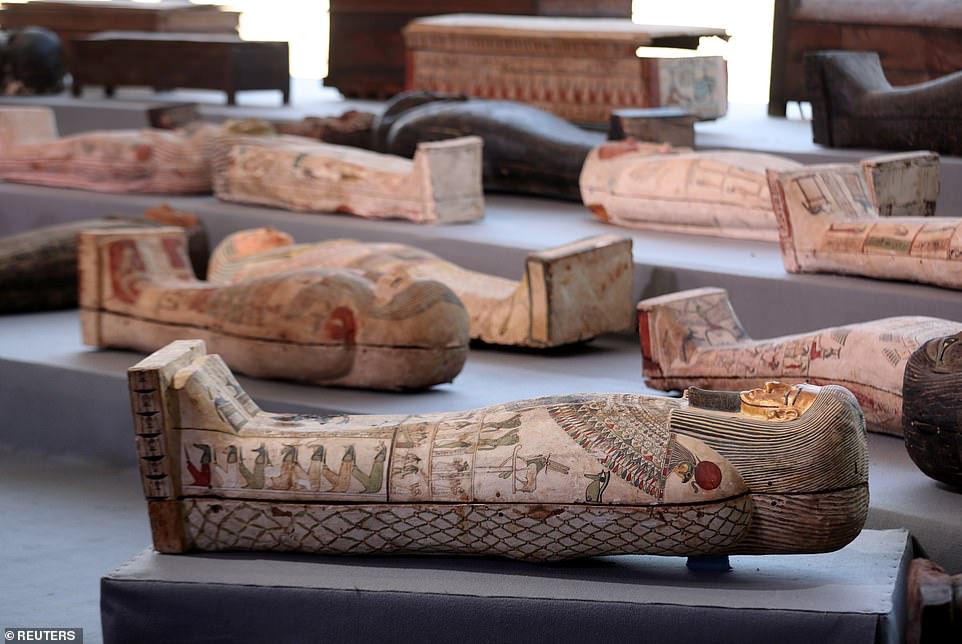 The sarcophagi (picture) were found in three grave shafts at depths of 12 meters in the extensive Saqqara necropolis south of Cairo. 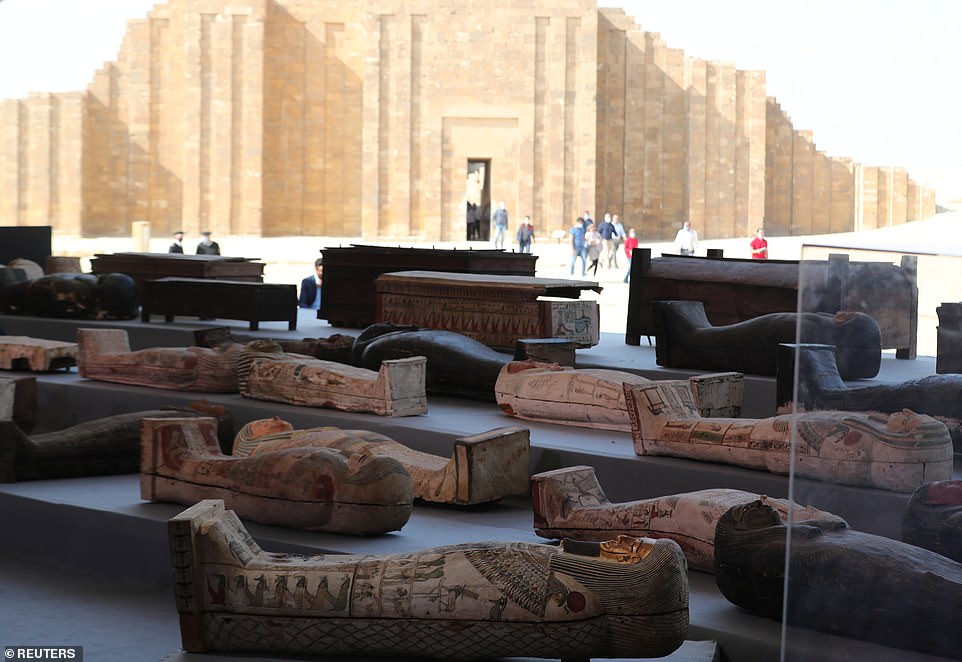 Saqqara is the tomb of the ancient Egyptian capital, Memphis, a UNESCO World Heritage Site (pictured in the background, outside, where the coffins were unveiled on Saturday 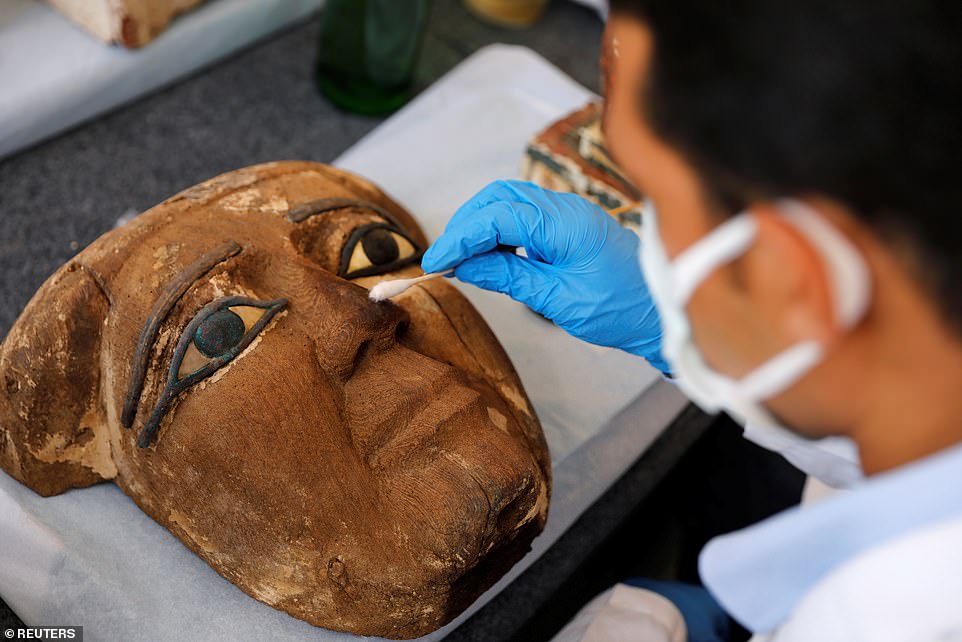 The huge find came a little over a month after archaeologists found 59 other well-preserved and sealed wooden coffins in the area that were made more than 2,500 years ago. Pictured: an archaeologist is working on an artifact 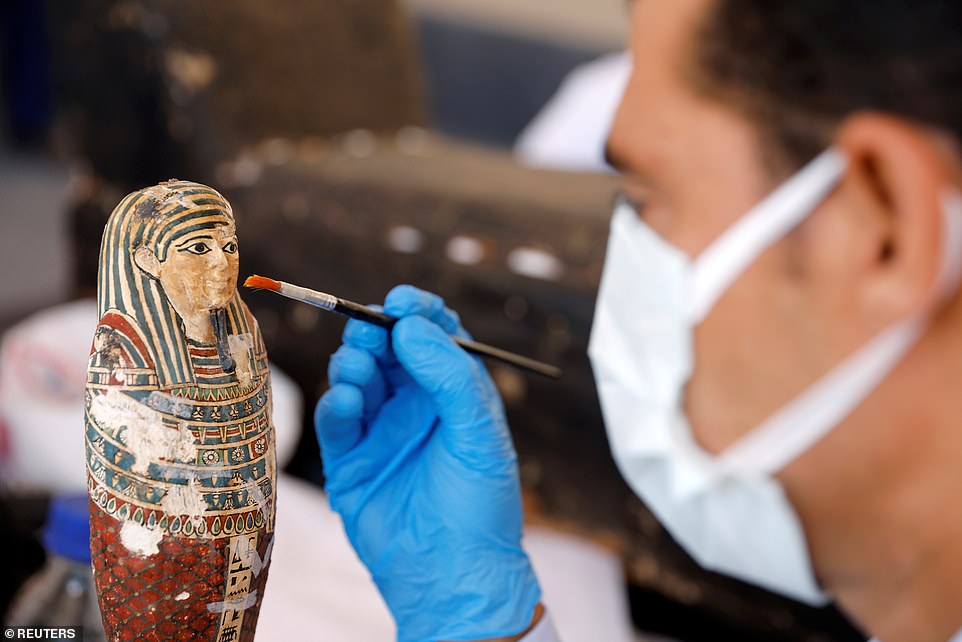 The objects discovered come from the Ptolemaic dynasty, which ruled Egypt for about 300 years – from about 320 BC. until about 30 BC And the late period (664-332 BC) 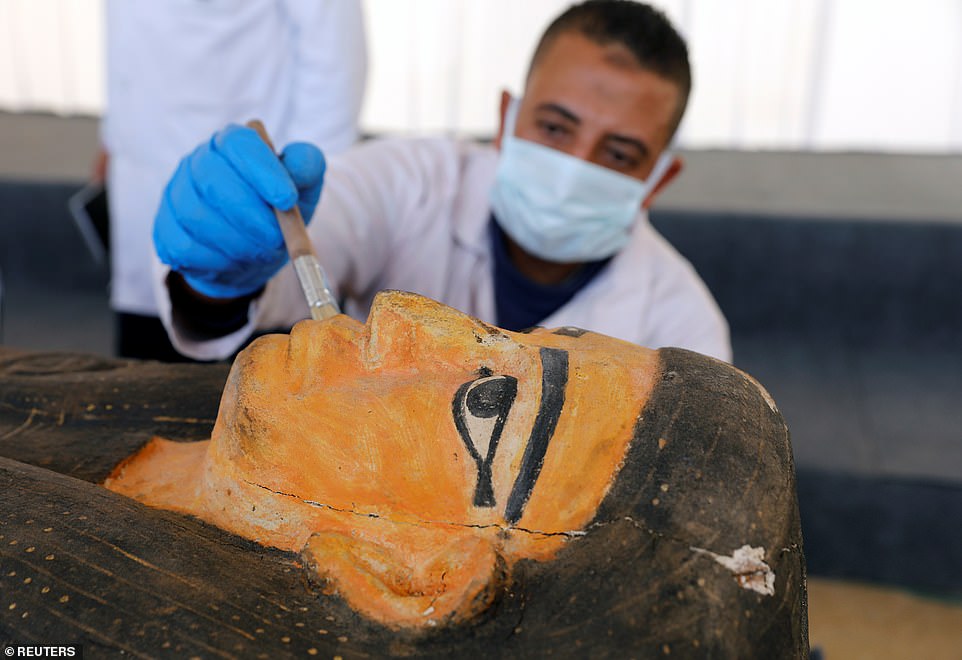 More than 40 statues of ancient deities and funerary masks have also been discovered on the site, many of which have been preserved with their original colors and patterns

Over thousands of years the ancient Egyptians developed the elaborate and complex burial practices that they believed were necessary to get into the afterlife.

The processes evolved over time, but many elements remained consistent through different ancient Egyptian dynasties.

The most classic form of mummification comes from the 18th dynasty, which spread over the period from 1549/1550 to 1292 BC. Chr. Extended.

First the brain was removed. Some say this was done through a metal hook inserted through the nose, while others say it was a stick through the skull that was used to liquefy the brain.

The brain would then have been drained through the nose before the skull was filled with a mixture of tree resin and fragrance.

This stopped any remaining brain tissue from breaking down and also suppressed the odor.

Then the lumbar spine was cut open and the abdominal organs removed. The heat was usually left. These were then heavily salted and placed in canopy glasses.

The body was then placed on a bed of baking soda for between 35 and 70 days.

At the end of this period, the now dehydrated corpse was washed, oiled and covered with resin as an adhesive.

The body was then wrapped in linen until it was completely covered.

Depending on the deceased's social status, the mummy was sometimes adorned with decorations such as a mask or shroud.

The mummy was then buried in a grave ready for the afterlife.

The Minister of Tourism and Antiques, Khaled el-Anany, reported at a press conference that the objects discovered were from the Ptolemaic dynasty.

& # 39; Saqqara has not yet revealed all the content. It's a treasure, ”El-Anany said at the unveiling ceremony.

& # 39; Excavations are still ongoing. Whenever we empty a grave shaft with sarcophagi, we find an entrance to another. & # 39;

The discovery at the famous necropolis is the latest in a series of archaeological finds in Egypt.

It came a little over a month after archaeologists found 59 other well-preserved and sealed wooden coffins in the area that were made more than 2,500 years ago.

Since September, ancient authorities have discovered at least 140 sealed sarcophagi with mummies in the same area of ​​Saqqara – about 10 miles southeast of the Giza pyramids.

The minister attributed the numerous discoveries in Saqqara to extensive excavation work in recent years.

He said they would take the artifacts to at least three Cairo museums, including the Grand Egyptian Museum, which Egypt is building near the famous Giza Pyramids.

They would announce another discovery at Saqqara necropolis later that year, he added.

The Saqqara site is part of the necropolis in Egypt's old capital, Memphis, which includes the famous Giza pyramids and smaller pyramids in Abu Sir, Dahshur and Abu Ruwaysh.

The Memphis ruins were designated a UNESCO World Heritage Site in the 1970s.

Archaeologists also hope to find an old workshop for making wooden coffins for mummies soon, according to Mostafa Waziri, general secretary of the Supreme Council for Antiquities.

Egypt often touts its archaeological discoveries in hopes of stimulating an important tourism industry that was hit by the political turmoil following the 2011 popular uprising that overthrew longtime autocrat Hosni Mubarak.

The sector was dealt another blow by the coronavirus pandemic this year as well. 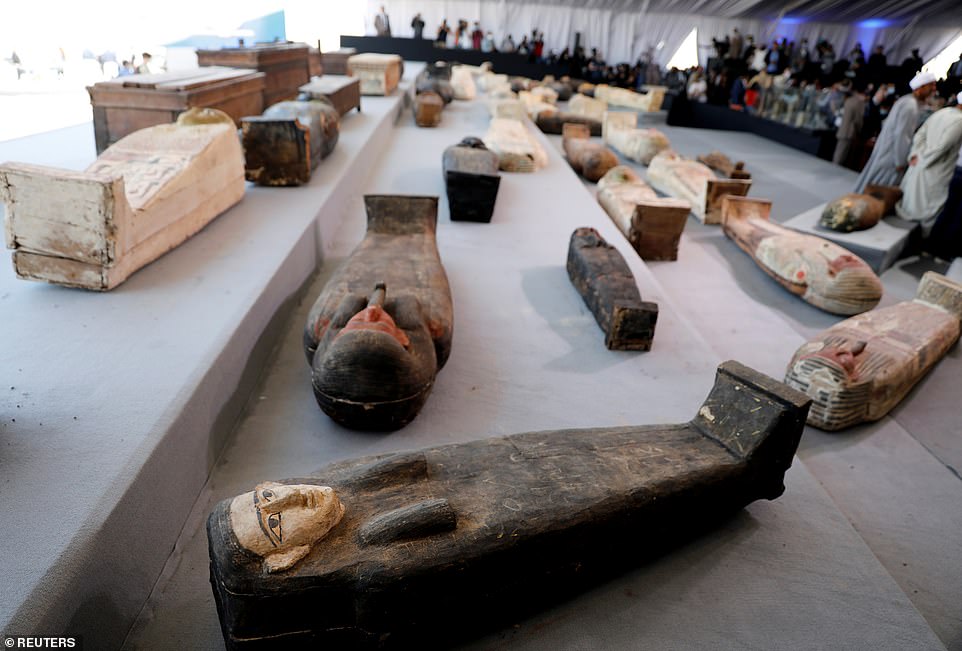 The Minister of Antiques and Tourism, Khaled al-Anany, said: “The excavations are still ongoing. Whenever we empty a grave shaft with sarcophagi, we find an entrance to another. & # 39; 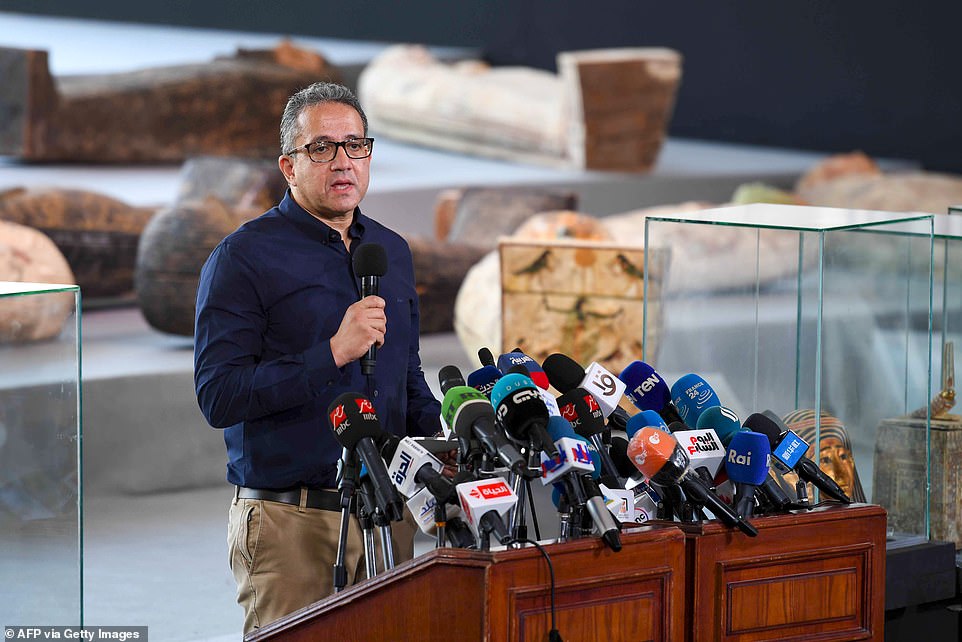 Discoveries will be spread across several museums in Egypt, including the yet-to-be-opened Grand Egyptian Museum on the Giza Plateau, said Minister of Antiquities and Tourism Khaled al-Anany (pictured at the unveiling). 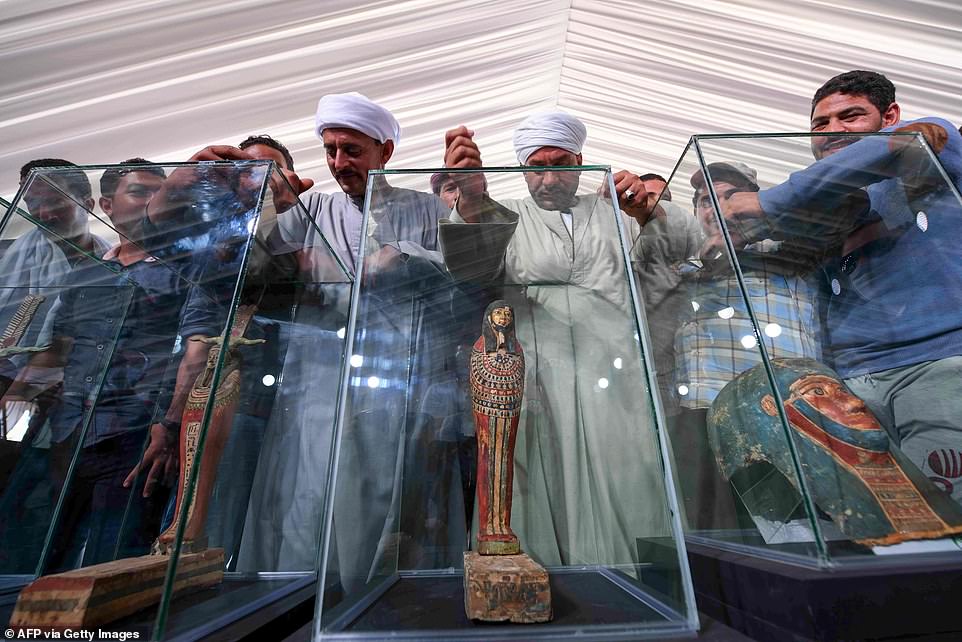 Pictured: statues and funerary masks exhibited during the unveiling of the ancient treasure 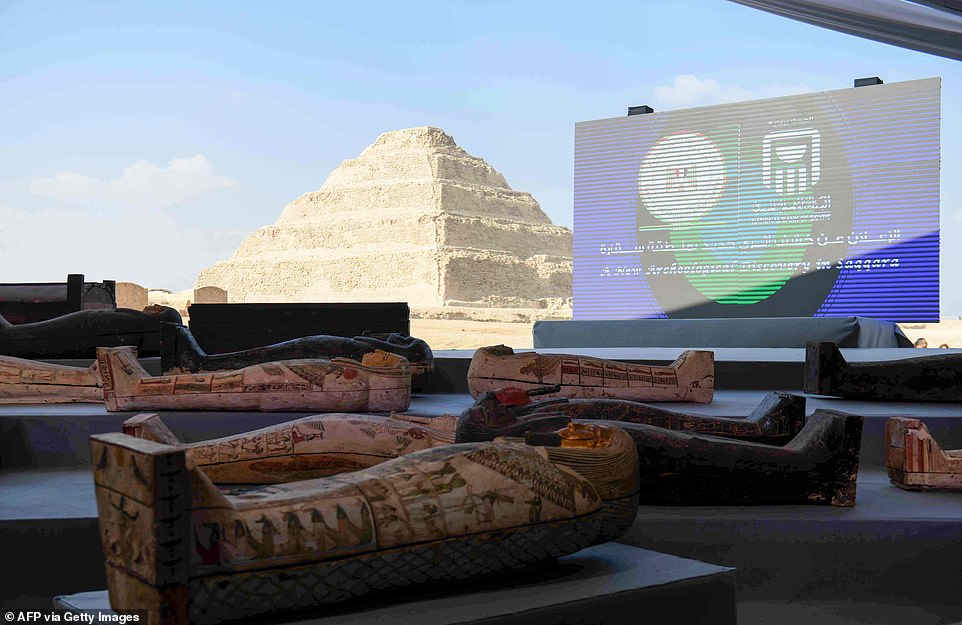 One picture shows wooden sarcophagi on display during the unveiling of an ancient treasury of more than 100 intact sarcophagi in the Saqqara necropolis 30 km south of the Egyptian capital, Cairo (pictured in the background). 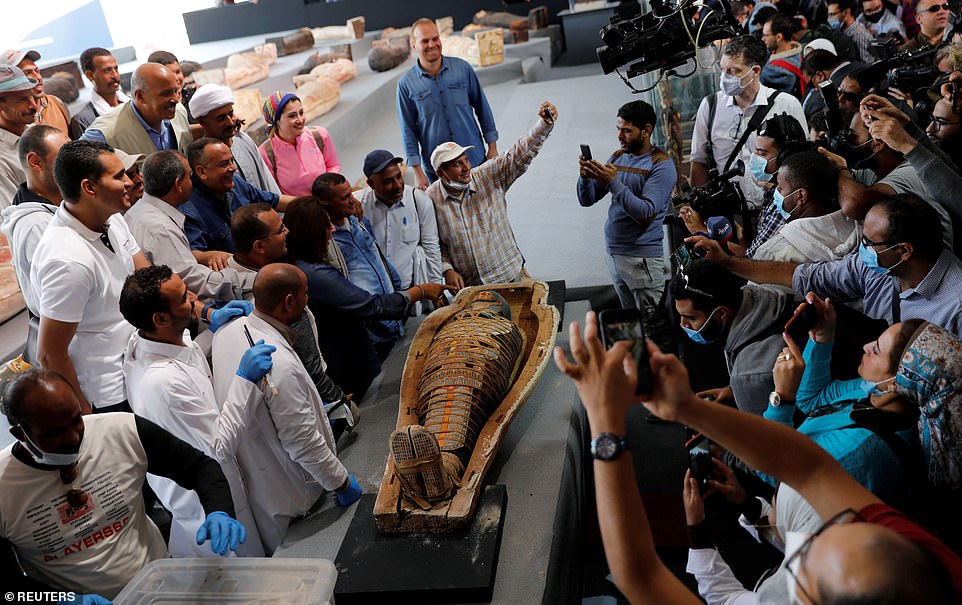 Archaeologists also hope to find an old workshop for making wooden coffins for mummies soon, according to Mostafa Waziri, general secretary of the Supreme Council for Antiquities 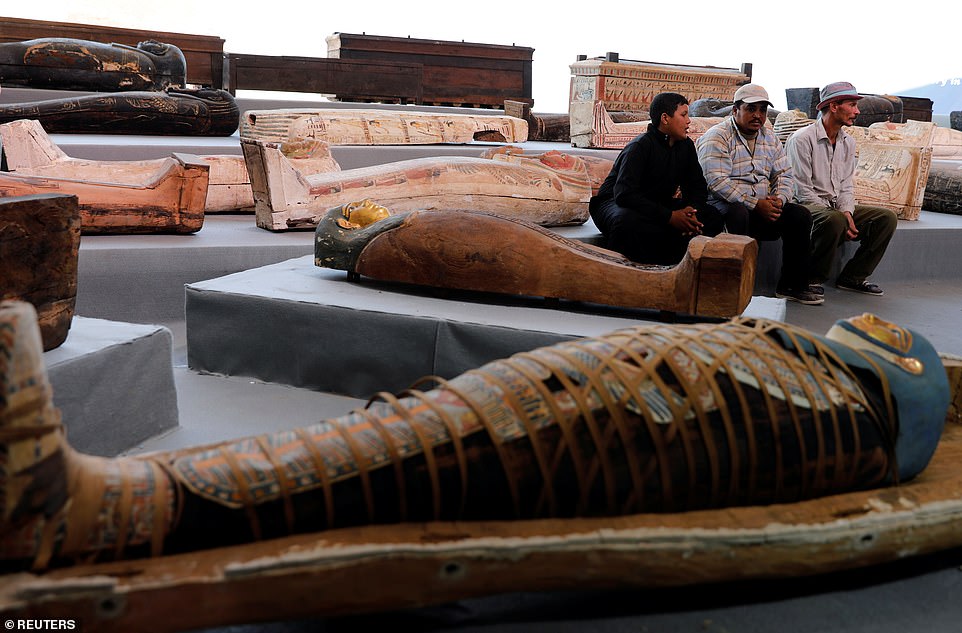 Egypt hopes archaeological discoveries will boost tourism, a sector that has suffered multiple shocks since a riot in 2011 to today's coronavirus pandemic

Prince Williams' last bachelorette party: Duke seen on the dance floor
The suspect is in custody after punching the 67-year-old 5-foot-5-inch Ghostbusters star Rick Moranis in the head
Comment