Remdesivir, an antiviral drug first made to treat Ebola, has been used experimentally in Covid-19 patients since the outbreak began.

It's approved for use by doctors in the UK and US based on early data suggesting it might be helpful, but the scientific evidence is mixed.

There are claims of miraculous recovery, improved chances of survival, and shorter illness, but other studies have shown it makes no difference to patients in the hospital with Covid-19.

Here's what research has found so far:

Doctors who wrote in a Wuhan Institute of Virology study published in the prestigious journal Nature in February said, "Our results show that remdesivir is highly effective in controlling 2019-nCoV infection in vitro."

They added that since the drug has been shown to be safe in humans, "it should be evaluated in human patients suffering from the novel coronavirus disease".

George Thompson, an infectious disease specialist at the University of California's Davis Medical Center, was part of a team that administered remdesivir to a sick American woman with Covid-19 in February.

"We thought they were going to die," Thompson told Science magazine. But 36 hours after the woman was hospitalized, doctors decided to treat her with remdesivir. Within a day, she saw the amount of virus in her body decrease and her condition began to improve.

Richard Childs, assistant surgeon general and lung specialist at the National Institutes of Health, told the Wall Street Journal on Friday that 14 American patients were being treated with remdesivir from the Diamond Princess cruise ship in Japan.

“Many of them would likely die in a short time, and two weeks later no one died and more than half of them recovered. It's just amazing, ”he remarked.

"Encouraging" results from an uncontrolled study on 53 patients (April)

A study published in the New England Journal of Medicine in April revealed the drug's effects on a group of 53 Covid-19 patients in the US, Europe, Canada and Japan.

Thirty-four of them were sick enough to need breathing apparatus. All received the drug by infusion for 10 days or as long as they tolerated it.

After an average of 18 days, 36 patients, or 68 percent, required less oxygen or respiratory assistance. Eight others got worse. Four patients stopped treatment because of health problems.

Seven patients died, almost all over 70 years of age. That 13 percent death rate appeared to be lower than another report, but the comparisons were weak.

The University of Chicago Medicine recruited 125 people with COVID-19 through global clinical trials. Of those people, 113 had serious illnesses, STAT News reported in April.

All patients were treated with daily infusions of remdesivir. The antiviral drug resulted in "rapid recovery from fever and respiratory problems," with "almost all patients being discharged in less than a week," according to the study.

Most patients were discharged after their symptoms had subsided over a week, and only two patients had died at the time of publication.

The author of the paper called the results "hopeful" but cautioned that the results were difficult to interpret as they did not compare them to a control group.

Chinese researchers published results from one of the first randomized controlled trials – the gold standard – of remdesivir in April.

Professor Bin Cao of the China-Japan Friendship Hospital and Capital Medical University in China, who led the research, said, "Unfortunately, our study found that while remdesivir is safe and reasonably well tolerated, it has no significant advantages over placebo."

Those who took the placebo drug (78 people) had similar results to those who were given remdesivir (158). Remdesivir-treated patients took a shorter time to improve, 21 days compared to 23, but this was not statistically significant.

There was a one percent difference in the death rate between the two groups, which meant that the survival rates had no clear benefit.

A greater number were also found to discontinue their treatment due to adverse events during treatment with remdesivir, such as constipation and anemia.

Independent scientists said the study was too small to write off the drug and it wasn't the "end of the story" for remdesivir.

In a study published in the New England Journal of Medicine, remdesivir was found to lower the death rate in 1,063 hospitalized patients around the world.

Patients given remdesivir had almost a third (31 percent) shorter recovery time than those given a placebo – 11 days compared to 14 days.

The results also suggest a survival benefit, with a lower mortality rate of 7.1 percent for the group receiving the drug compared to 11.9 percent for the placebo group. However, this is not seen as a significant difference.

Each group in the study included around 200 patients who were hospitalized with moderate Covid-19, which means they were sick but not in intensive care.

Patients in the five-day remdesivir treatment group were 65 percent more likely to clinically improve on day 11 than those in the standard care group. The likelihood of improvement in clinical status during 10 days of treatment with remdesivir compared to standard care was also 31 percent higher.

The statistic is favorable but has not reached statistical significance, Gilead said.

It wasn't clear why those who took a longer treatment course didn't get better as quickly as those in the five-day group. 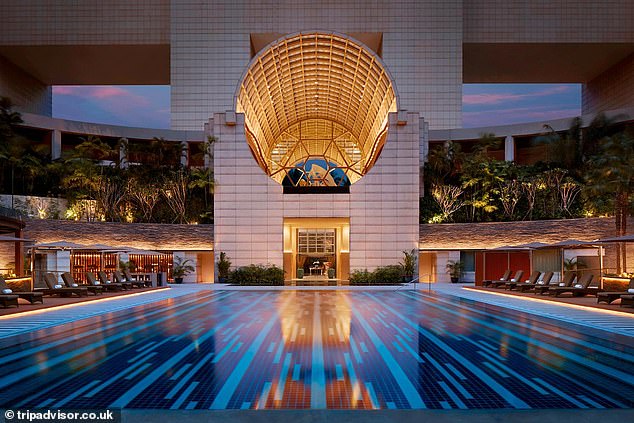