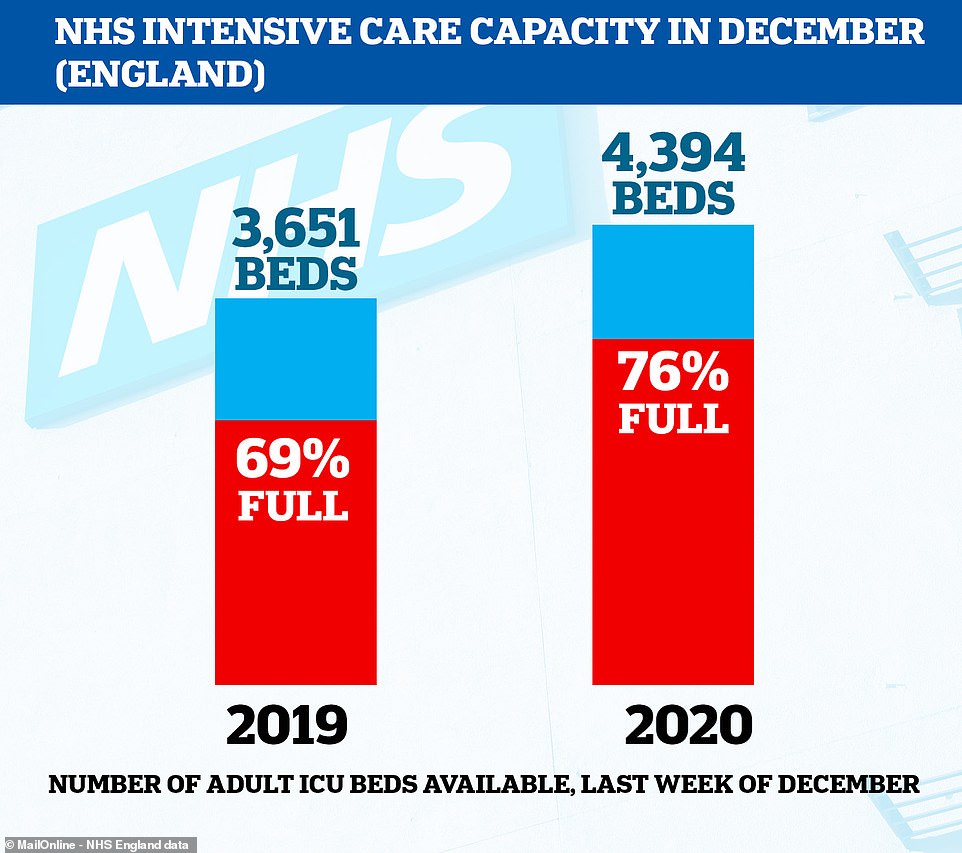 
The NHS intensive care units are busier than they were at this time last year, despite 700 extra beds, as medics warn that they are in “disaster mode”. Official data shows that critical care was at or near 100% in 13 of 18 London hospital trusts over Christmas

The NHS intensive care units are busier than last year at this time, despite the fact that there are over 700 extra beds, official figures show.

As the pressure of the second wave of coronavirus continues to mount and many patients caught Covid during the Christmas break, more and more hospitals are declaring they are in crisis, particularly in London and Essex.

In the same week, an average of 828 more patients were in the intensive care unit, suggesting that the Covid-19 strain is larger than the hospitals prepared.

Many of the extra beds are in London – 253 of them – but even that was not enough to prevent the surge in coronavirus patients.

The data showed that by Christmas week the intensive care units of two hospitals were 100 percent full and another 10 of 18 were more than 90 percent full, each with fewer than six beds for new patients.

In the past few days, grim reports have surfaced in the capital of forcing some of the major hospitals to treat Covid-19 patients in ambulances outside or dismantling wards to make room for intensive care patients.

Although the city has a huge nightingale hospital at the Excel center, nursing unions say there aren't enough staff to manage it and the equipment has been removed since it was put on standby over the summer. 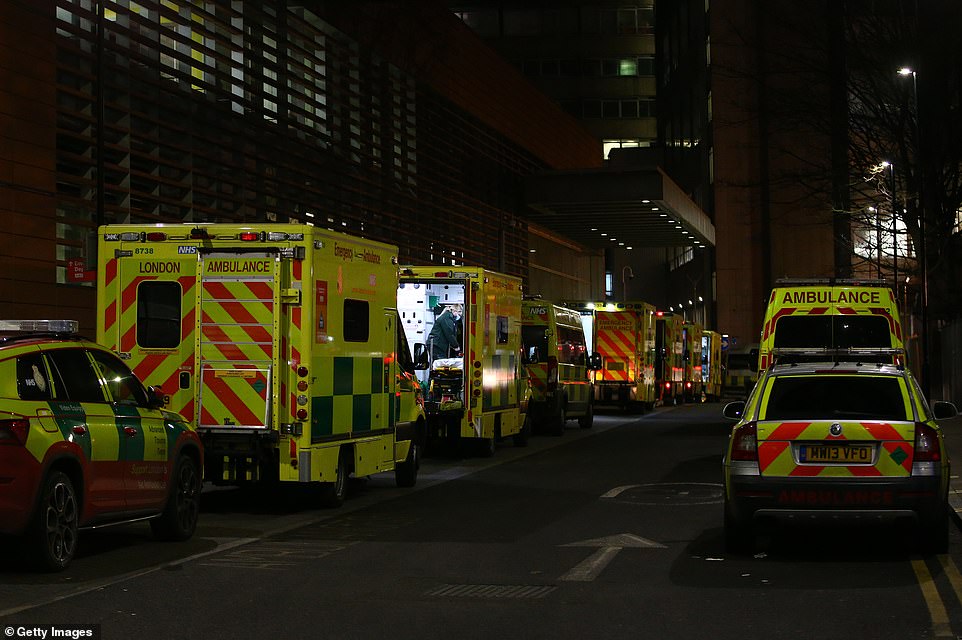 Health Department data shows 23,813 people were hospitalized with Covid-19 in the UK on December 28, the latest numbers.

This is more than at any other time during the pandemic, even during the devastating first wave in March and April.

Daily admissions in England have risen since the national lockdown ended on December 2nd and are now worse than they were in spring in some parts of London.

When the UK declared a record high of 55,892 coronavirus cases and nearly 1,000 more deaths yesterday, the executive director of University College London Hospitals Trust (UCLH) said the intake was "much more" than during the first wave in the spring.

Professor Marcel Levi announced that the 550-bed hospital now has 220 Covid patients, with the number increasing by five percent per day.

He added that the "real pressure" is in the intensive care unit, which now has "70 very sick patients".

According to The Guardian, entire floors of the hospital are being dismantled and rebuilt so that they can be used as intensive care units. They will be equipped with oxygen and Continuous Positive Airway Pressure (CPAP) machines that make it easier for people to breathe.

In the meantime, the Royal London Hospital announced yesterday that it is in "disaster mode".

In an email to staff, heads of the hospital in Whitechapel in east London – Britain's busiest – warned that there is only one nurse for every three Covid patients.

"We are now in civil protection mode," the message reads. "We no longer offer high-standard intensive care because we don't … Things get harder before they get better."

Patients wait 24 hours for beds inside, with some taking taxis to A&E to skip the line of ambulances waiting outside. 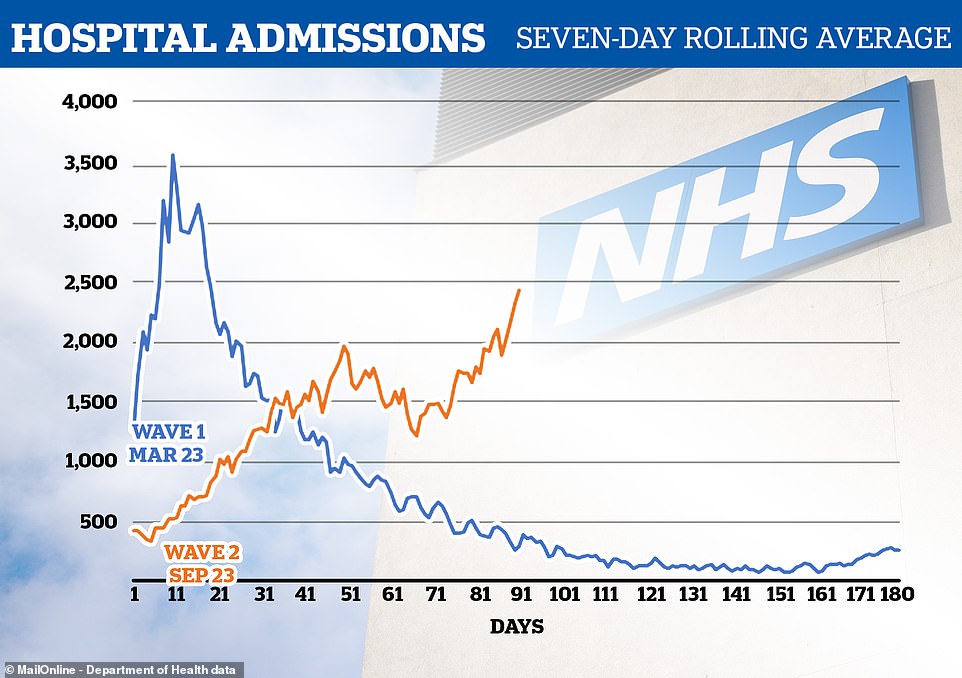 Covid-19 hospital admissions in the UK have been rising steadily for weeks, driven by a surge in England after the second national lockdown in November caused only a brief drop in numbers 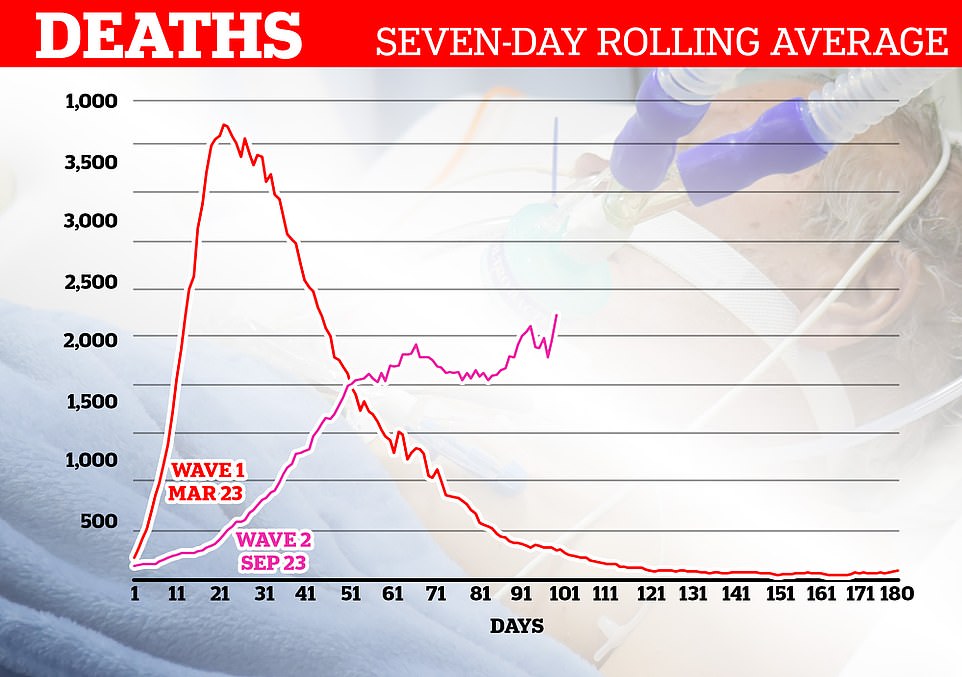