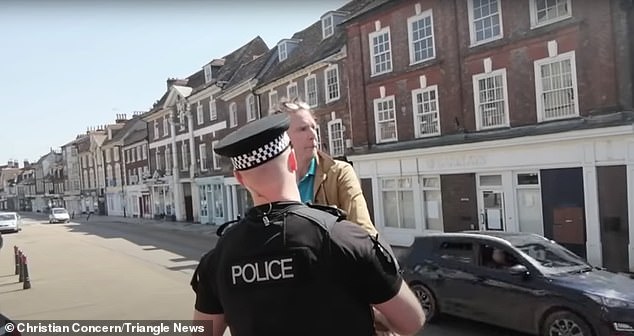 
A preacher was awarded £ 50 in damages and £ 1,200 in legal costs by Dorset police after an officer forcibly removed him from a van while singing Amazing Grace to a crowd amid the coronavirus lockdown.

Dorset police admitted no liability after 44-year-old Dominic Muir said a police officer stepped on his van "aggressively" and grabbed his wrist so tightly it was "painful". Instead, he offered him £ 50 to stop a legal suit.

Mr Muir said he was "humiliated", "intimidated" and felt like a "criminal" after the clash in Blandford, Dorset on April 22nd.

He threatened to sue, which resulted in the Dorset Police offering a payout and paying his legal costs "as is the custom when claims are settled this way".

Dorset police admitted no liability after 44-year-old Dominic Muir said a police officer stepped onto his van "aggressively" (picture) and grabbed his wrist so tight it was "painful". Instead, he offered him £ 50 to stop a legal suit

Mr. Muir said, “I couldn't believe it, I was going to bring the gospel message, the message of hope, people were listening and a police officer came and stopped what I was doing.

"Suddenly, out of nowhere, getting onto the back of my vehicle, grabs my arm strongly."

Video footage showed Mr. Muir, who runs Christian charities Now Believe and Jesus Fields, standing in the back of a truck, singing through a microphone and clutching his Bible.

An officer approached him and said, "I must ask you to continue."

The officer decided to give Mr. Muir a few more minutes to finish. 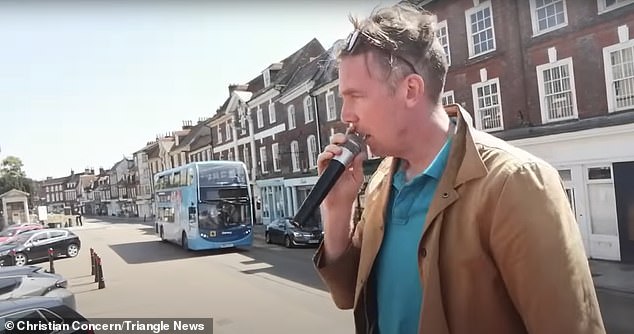 Video footage showed Mr. Muir, who runs Christian charities Now Believe and Jesus Fields, standing in the back of a truck, singing through a microphone and clutching his Bible

Only minutes later, Mr. Muir claimed the officer got into his van "aggressively" and grabbed his wrist so tightly that it was "painful" and forced him to stop.

Mr Muir threatened legal action against the police, arguing that he had not violated Covid-19 guidelines while preaching.

He said, & # 39; It was humiliating. It was intimidating. It was shocking. I felt like a criminal. And the whole reach, the message of salvation, was completely stopped.

“The reason this case is so important is that we are right in the middle of a pandemic that sees people thriving, mass depression, domestic violence and losing their jobs.

"I have no doubt that if I had continued preaching or singing, I would have been handcuffed, arrested, and taken to the police station."

He said he had always taken social distancing seriously but "had a legitimate job to do," adding, "Street preaching in Britain has for centuries been a respected profession that was respected and considered essential to the physical, emotional and spiritual well-being of people would be. 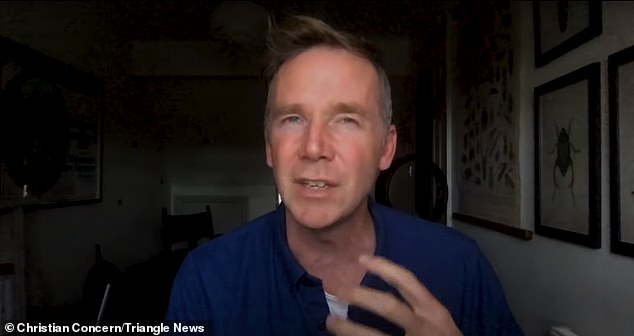 Mr Muir (pictured) threatened legal action against the police, arguing that he had not violated Covid-19 guidelines while preaching.

“To be closed by the police like this was a big change for me and shows the extent of the secularization of society.

"I hope that respect will be given to Christian ministers and charities who seek to bring hope to those in desperate situations whose greatest need is their spiritual need."

A Dorset Police Department spokesman said officers had been called in to violate Covid-19 lockdown restrictions and found that Mr Muir had formed a crowd.

They said: "Officers were called to Blandford Market Place at 12:58 pm on Wednesday April 22nd to report a COVID-19 violation under lockdown restrictions at the time.

When they arrived, they found that the complainant was preaching in the area in question, which the troops viewed as a violation of the government's COVID-19 legislation.

"His behavior drew other people onto the scene, which led to a gathering – something we saw as a violation of the rules."

They said there was "a significant public health risk" at the time due to the coronavirus pandemic.

"The officer tried to get in touch with the complainant and to encourage him to stop," they added. However, since he did not cooperate, the officer used appropriate force to remove him from the truck.

The complainant then voluntarily left the scene. In total, each detention by the officer in question lasted less than a minute.

“We can confirm that, although liability in relation to an alleged attack by an official was denied, the complainant was made and accepted an unscathed offer of £ 50.

"The Armed Forces also agreed to legal fees for the complainant's legal representative at £ 1,200, as is customary in settling claims in this way."