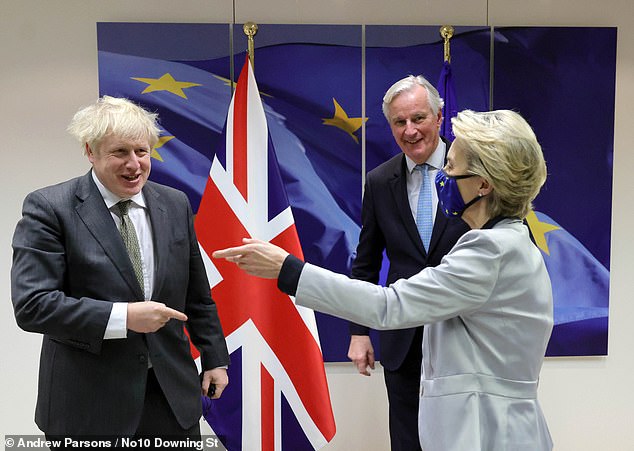 
Wednesday night's Brexit dinner – a dinner that hit a cul-de-sac that threatens to propel Britain towards No Deal – had actually started with a joke.

When Boris Johnson saw that the EU's chief negotiator for Brexit, Michel Barnier, was approaching, he tried to break the ice with a moment of humor.

He smiled and pointed a finger at him and said: "You gave me Covid!" – A reference to media claims earlier this year that Mr Barnier was the source of the # 10 outbreak that put the Prime Minister in intensive care.

Not known for his sense of humor, Mr Barnier once responded in kind, smiled at the Prime Minister and replied, "No, you gave it to me." It turned out that the British team would make the most of the silent French all night long. 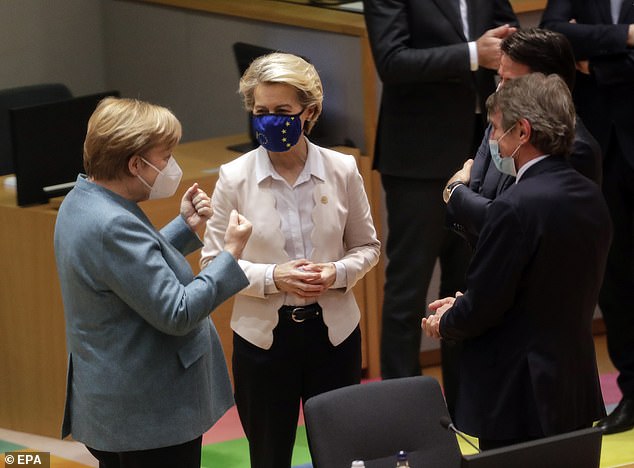 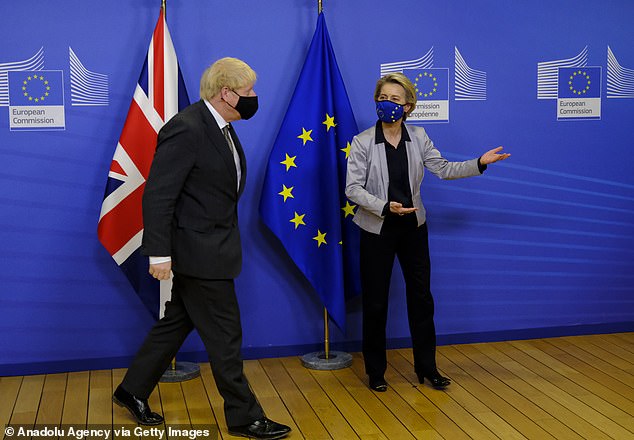 Boris Johnson and the President of the European Commission, Ursula von der Leyen, meet in Brussels on trade agreements

We are facing an EU travel ban from January 1st

It emerged yesterday that after the Brexit transition period expired, British citizens no longer automatically qualify for unrestricted travel in the block according to the coronavirus rules.

Unless the European Commission or individual member states make an exception, the British are only allowed to make essential trips to the continent.

The EU countries were under pressure to form their own travel corridors with Great Britain.

"I can't believe that EU countries that rely on the purchasing power of British business and leisure travelers will try to block entry after January 1st," said Paul Charles of PC Agency travel advice. "Cool minds have to assert themselves, as travel and tourism make an important contribution to economic growth in Europe."

The problem is that after January 1st, the UK will no longer be part of the EU's free movement rules. Few countries with low Covid-19 rates are exempt from rules that exclude non-essential visitors from outside the EU and the European economy area.

These include Australia, New Zealand and South Korea. A spokesman for the EU commission said there were no plans to add the UK.

The travel trade group Abta said: "The EU has tried to take a common approach but this is only a recommendation and individual countries can implement their own measures." Foreign Minister Dominic Raab told BBC Radio 4's Today: "Covid restrictions will depend on the combination of decisions made by the EU, but also by the member states."

The background of the meeting was not encouraging. The Prime Minister had already had two long talks with the head of the European Commission, Ursula Von der Leyen, last week, which had proven largely unsuccessful.

In honor of Mr Johnson's visit, the Commission raised the Union flag in front of its headquarters in Berlaymont, Brussels, for the first time since the UK left on January 31st.

However, keen-eyed observers noted that the flag was upside down – a method traditionally used to signal distress.

And when the Prime Minister tried to contact Ms. Von der Leyen before the photo call before dinner, she gestured him away and said: “Keep your distance because of the strict Covid rules in Brussels.

The two leaders briefly removed their face masks for the cameras, but the former German defense minister instructed the prime minister to lay his back immediately and asked him to comment: "You are sailing a tight ship here, Ursula – and quite rightly too. "

Some members of the UK team also suspected the EU was trolling them with a fish-dominated dinner menu – one of the most controversial issues of the entire talks.

The three-course meal ended with a pavlova – an Australian dish that appeared to be a nod to the Prime Minister's description of No Deal as an Australian option.

Mr Johnson had expected a passionate exchange, in which both sides contributed new ideas to overcome the impasse. But when he and negotiator David Frost set out the British position over a scallops and steamed turbot dinner, they met with only a muted reaction.

"It was a strange atmosphere," said a source. They just sat and listened and didn't really get involved. It was frustrating – we looked for creativity and got very little in return … when they got involved they were in broadcast mode just telling us their positions which we have had many times before. & # 39;

The British side was stunned. "They still didn't seem to understand the fundamental point we are leaving to regain our independence," a source said.

Despite clear signals from the Prime Minister that he was ready to leave, top EU officials seem to have believed he had traveled to Brussels to surrender. 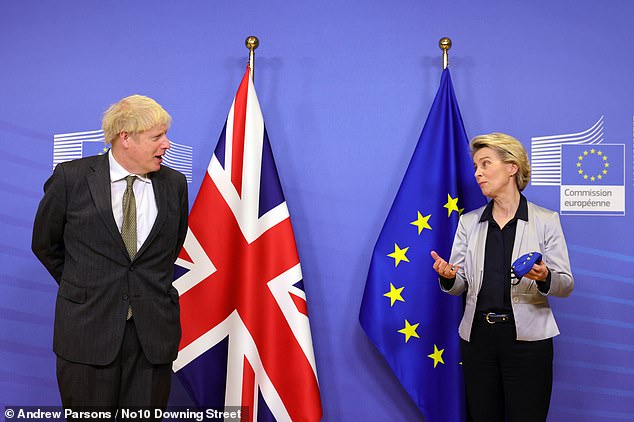 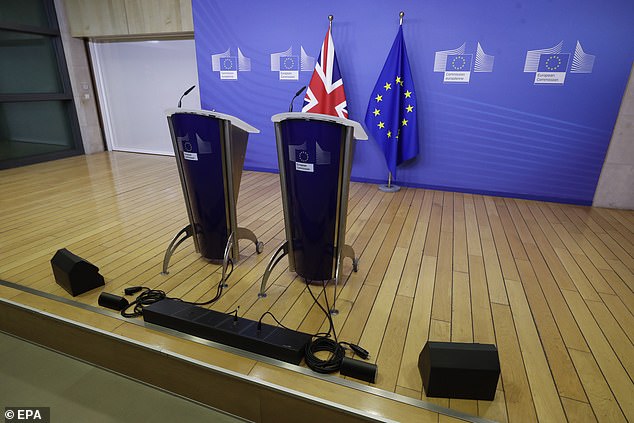 At the end of a meeting between British Prime Minister Boris Johnson and the President of the European Commission, Ursula von der Leyen, on a post-Brexit trade agreement in Brussels, two panel discussions are on the agenda for a possible joint declaration

As they emerged from the meeting, it became clear that another opportunity for progress had been missed. Although the talks would continue, there was no new mandate.

And a deadline was set for Sunday to decide whether it is even worth continuing the talks. British officials described the discussions as "open" – diplomatic code to a disagreement.

As the Brussels restaurants were closed due to blockage, the dinner took place in the offices of Ms. Von der Leyen on the 13th floor of the Berlaymont headquarters of the European Commission. As a young journalist in Brussels, Mr Johnson once falsely wrote that the huge building known to Eurosceptics as the Death Star was about to be demolished.

On that occasion he misjudged the EU. This time the EU seemed to have misjudged him.

SIMON WALTERS: This is a huge Brexit gamble that Boris cannot avoid

By Simon Walters for the Daily Mail

Until yesterday evening, it was tempting to believe that the violent aftermath of Boris Johnson's dinner with the head of the European Commission, Ursula von der Leyen in Brussels, was fully staged.

That this is all part of a carefully choreographed diplomatic dance that allows each side to prove to their respective followers that they fought hard to gain concessions from one another.

Indeed, for all their feverish intransigence, the couple will soon turn up with what both claim is a triumph of negotiation and compromise, and that their side received the best offer.

That a Brexit trade deal is essentially coming out of a hat like a rabbit. Boris and Ursula would meet again, do a Covid-safe elbow, smile for the cameras and – voila – close a Brexit deal. 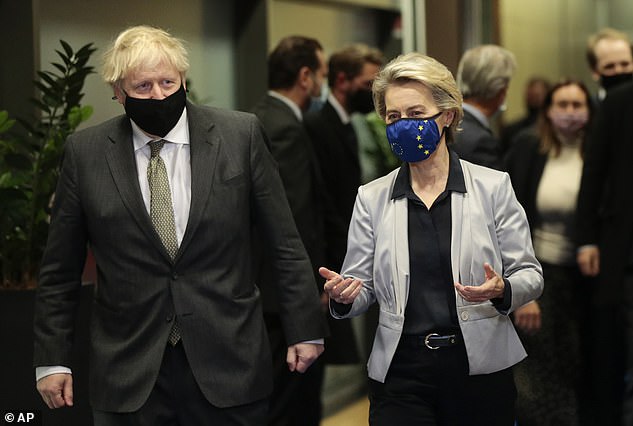 The President of the European Commission, Ursula von der Leyen, speaks to British Prime Minister Boris Johnson before a meeting at the EU headquarters in Brussels

But every prospect of it took a double blow last night.

They included a requirement that French trawlers continue to plunder British waters. All Britain would get in return is a mocking six months with trucks and air connections moving freely.

With the ball in place, Mr Johnson responded by reinforcing his own no-deal rhetoric. In his first public comments since dinner on Wednesday night, he likened the EU's request for the UK to copy the bloc's future legislative changes to two twins forced to have the same haircut or British women forced to pay more for handbags pay when the price has been increased in Europe.

The trade deal on the table from Brussels was "not good," said Mr Johnson. Britain would forever be "locked" in EU orbit.

No doubt the immaculately coiffed and recognized woman will have taken note of von der Leyen.

Certainly it was a clear shift in tone from the couple's polite mediation over scallops and turbot the day before.

But in many ways Mr Johnson's bold declaration of intent last night – that Britain should prepare for No Deal – wasn't all that surprising. He was never afraid to count on the European Union.

He took a risk when he decided at the last minute to support Brexit in the 2016 referendum. again claiming he would rather die in a ditch than not go until October 31 of last year; then expelled 21 Tory MPs for trying to block Brexit; and finally by calling a Christmas election to get Brexit done.

At every opportunity most experts said he was stupid.

You were wrong. He won a Commons majority of 80 seats and managed Brexit.

In the eyes of most – certainly those who voted for him – Boris, unlike most politicians, did what he had promised. 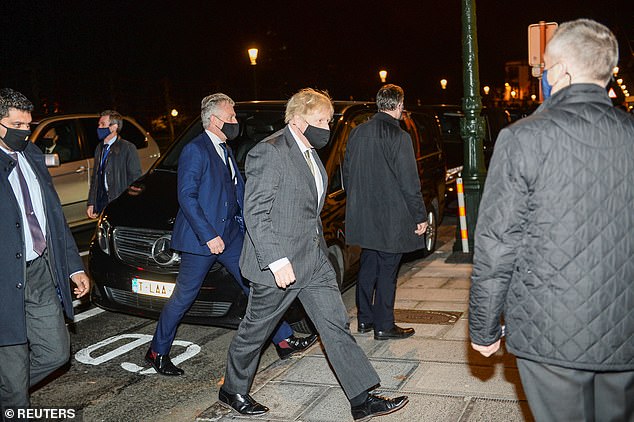 Of course, there will be some EU observers who, while watching Mr Johnson last night, desperately claim that 98 percent of the trade deal is already over. In their eyes, everything that is left – fishing rights, so-called "level playing fields" and litigation – is only 2 percent.

But yesterday's war of words suggests it's the other way around.

As the Prime Minister insistently said in the House of Commons on Wednesday, Brexit is about “sovereignty”, an extremely emotional word that cannot be ignored.

Make no mistake: if we don't regain control of the waters around our coast, many Brexiters will wonder why we don't just replace the Union flag above number 10 with the blue and gold EU banner.

Already die-hard Pro-Brexit Tory MPs are ready to denounce Mr Johnson, a one-off Churchill biographer, as the Latter-day Neville Chamberlain if he gives more than an inch.

In addition, Brexit is also an issue of "sovereignty" for the EU, which apart from its name has become a "sovereign" superstate and now feels a threat to its unity.

Despite his powerful statement last night, Mr Johnson and Ms von der Leyen will be fully aware that both a deal and a no deal outcome are fraught with danger to the Prime Minister.

Give too much away to get a deal and Brexiteer Tory MPs could challenge his leadership. Don't give anything away and choose No Deal and risk further disruption if the UK is hit by the economic carnage caused by Covid.

However, some Conservative MPs privately argue that the devastating impact of the pandemic on our finances actually amplifies the no deal case.

An ex-minister who is one of Mr Johnson's best known supporters told me bluntly: “The economic blow that Covid has caused across Europe will be so great that it is impossible to calculate whether Brexit will be positive or negative Government has impacted economy when there is no deal. & # 39;

But isn't the Prime Minister so cynical as to think about such a calculation?

Whatever the truth, Mr Johnson and Mrs von der Leyen agreed over the seafood dinner that they would both make a final decision by Sunday.

Mr Johnson won the Tory leadership contest last year after telling his party that Brexit must be settled once and for all. "Kick the can again and we'll step in the bucket, my friends, that's the sad reality," he said.

After yesterday evening's bold volley, this statement is even more true today.