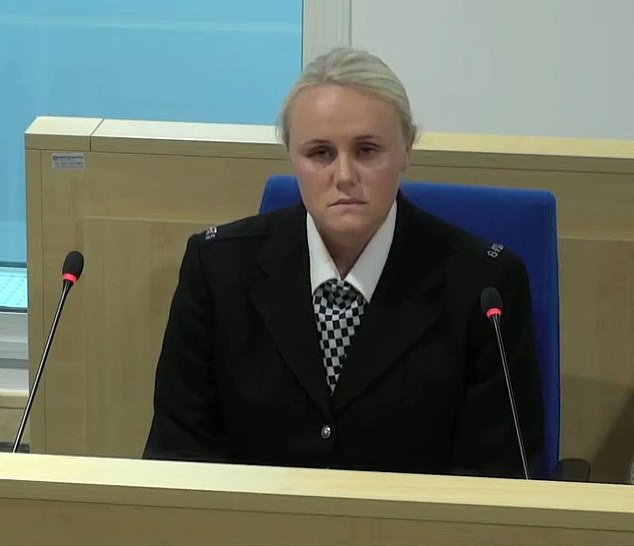 
A police officer patrolling the Manchester Arena took an "unacceptable" two-hour break to buy a kebab on the day of suicide bomber Salman Abedi's attack.

British Transport Police (BTP) officer Jessica Bullough admitted that she would have "probably" asked Abedi what was in his backpack if she had seen him.

PC Bullough returned to patrol shortly after the suicide bomber walked down the platform of Victoria Station to the foyer of the arena's City Room.

At the end of an Ariana Grande concert, he detonated his homemade explosives.

Pc Bullough told the public investigation into the terrorist attack that killed 22 people and injured hundreds on May 22, 2017, that their break should have been between 50 minutes and an hour.

Instead, she was on patrol for two hours and nine minutes, driving for half an hour to buy a kebab.

Jessica Bullough pictured took an "unacceptable" two-hour break on the day of Salman Abedi's suicide attack – and would have "probably" asked what was in his backpack if she'd seen him, an investigation heard

Paul Greaney QC, attorney for the investigation, asked her, "When you look back, does that seem acceptable?"

She replied, "No, unacceptable."

Mr. Greaney continued, “You had just missed Salman Abedi when he walked from the platform to the City Room.

"Of course we all know what he's going to do, but if you'd been on patrol 10 minutes earlier and seen this man that way, would you have viewed him as a suspect?"

Pc Bullough said, "Although it was a train station with people with large backpacks on their backs. If he'd watched the footage, walking past me with that bag on his back, I would probably have asked him what's inside. "

She said her suspicions were aroused by someone who "almost fell" with a heavy backpack.

Last week, about 30 minutes before the explosion, the investigation was told that a security officer looking for counterfeiters had briefly alerted Pc Bullough to a "praying crank" on the upper floor of the foyer.

Pc Bullough said she had no recollection of anyone reaching out to her to raise concerns and was "confident" that no one told her about a person praying.

She was later the first ambulance worker to arrive at the site of the explosion after "overtaking colleagues" when she rushed over to assist the victims.

Manchester Magistrates' Court heard that Pc Bullough, who joined BTP in July 2016, was the most skilled officer in the arena complex after another police officer with 30 years of experience was called off to deal with a burglar suspect at the train station Deal Piccadilly.

Stephen Corke said he would normally have been standing on the raised level of the foyer for concerts from around 10 p.m., but would have been at the other end, where Abedi had been hiding out of sight of CCTV cameras for almost an hour.

There were no uniformed officers in the foyer when the bomb exploded, although orders were given to position an officer there at the end of the concert.

They had left the arena uncontrollably for 40 minutes while everyone was taking a meal break at the same time, despite instructions to postpone their breaks and be ready by 9 p.m. 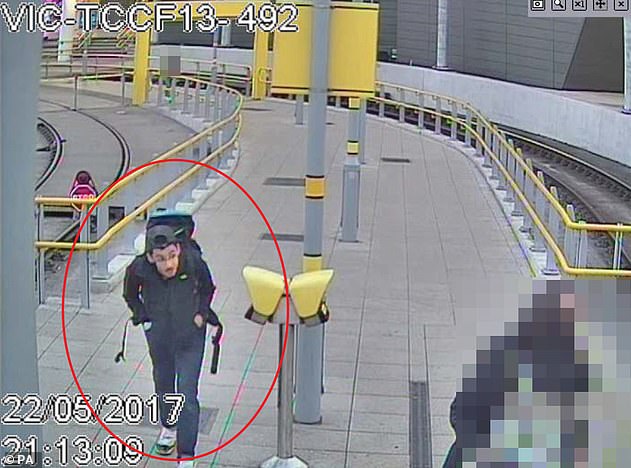 The officer returned on patrol shortly after the suicide. The bomber walked down the platform of Victoria Station to the foyer of the City Room of the arena

PC Corke wasn't among them because he had decided to look for a "vulnerable location" en route from Greater Manchester Police Headquarters to Victoria Station, he said.

The location he unspecified was only on the route because a road was being excavated in Ancoats and he was only doing a check-by, he added

As a result, the officer was at the wrong end of Deansgate, one of the main shopping streets in Manchester, when the bomb went off and he had to drive at speed down the street to the arena.

His colleague Matthew Martin, who was the passenger in the car, said they visited Oxford Road and Deansgate stations to "see a few trains come in and out".

PC Corke would normally have positioned himself on the mezzanine floor near where the Salman Abedi bomber had been hiding for an hour.

He was asked if he had seen Abedi waiting in the city room with a backpack on his back, if he had noticed that he was out of place.

Mr. Greaney said there were many ifs and buts, but asked, "Would you have turned to him?"

"That is quite possible, yes," said the officer.

However, the investigation found that PC Corke spent seven hours arresting and questioning a burglar suspect at the Greater Manchester Police Headquarters in Central Park before going to Piccadilly Station.

He claimed he had put the team on hold at the Evidence Review Gateway at the British Transport Police headquarters in Birmingham for an hour before he could do the paperwork.

PC Corke said he snapped an elevator with another officer on duty and chose to go to a vulnerable point. 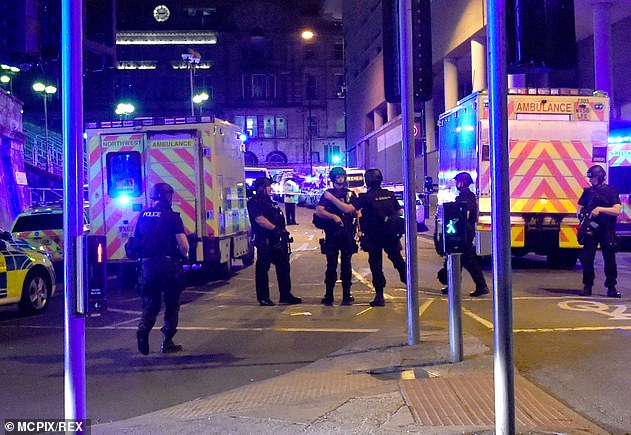 Pictured: ambulances and police arrive at the Manchester Arena after the explosion

Mr. Greaney asked, “You knew the expectation was that you would be back by 10:30 pm. May I ask you a very direct question and seek a direct answer, why weren't you back at 10.30pm?

"The route we chose was chosen to visit a vulnerable point and I misregarded it by a few minutes," he said.

The investigation found that PC Corke completed the interview at 5:40 p.m. five hours before the attack, and at 9 p.m. told his sergeant that he would do the paperwork and take a short meal break before going into the arena.

"I knew I had to go back to the concert and I thought I could commit to both within that amount of time, but unfortunately I got it wrong by a few minutes," said PC Corke.

On the night in question, it did not occur to me that anyone would bend down so low that they would do something like this in this place. It was never in the back of my mind.

“We have all received varying degrees of counter-terrorism briefing, but not that night in question. There was nothing to suggest that there was a threat that evening. «

PC Corke said his job is to conduct a high visibility general patrol showing that there are police in the area for all security guards, merchandising people and the parents waiting.

“The main objective would be to ensure that people safely exit the arena, get on the trains, and leave the area.

He admitted that they both took an hour and a half for lunch in a room in Victoria Station when the maximum time should have been an hour.

It meant that from 8:58 p.m. to 9:30 p.m., while Abedi was leaving for the urban area, no police officers were patrolling outside the arena.

PC Brown was asked by Nick de la Poer QC for the question: “Was there a perception that playing at the Manchester Arena or Victoria Station is an easy option?

"No, nothing has been said that would be an easy option," he said.

Mr de la Poer asked what his sergeant would have thought if he had shown up and found them all on a lunch break.

"I think the sergeant would have wanted to know why we were on a break for this time, if there was a good reason, and would have advice with us," said the officer.

"Was there a good reason?" Mr de la Poer asked.

"No, I just think we were on break too long," said PC Brown.

The investigation, which is expected to be completed next spring, will continue on Tuesday.