The Muslim world today renewed its anger at Emmanuel Macron after the French president was not bowed to by Thursday's terrorist attack in Nice and swore that "we will not give any reason for freedom of expression".

Macron has become the focus of Islamic anger after defending the Prophet Mohammed's Charlie Hebdo cartoons that resulted in the murder of a teacher in the Paris suburbs two weeks ago.

After three people were murdered in a long series of terrorist attacks in France yesterday in Nice, Macron said France would not give up our values ​​despite the anger over the offensive caricatures.

Turkey has led the condemnation of France, but a spokesman for Turkish leader Recep Tayyip Erdogan tried on Thursday to distance him from the violence in Nice. He said: "We don't owe anyone an apology for expressing our strong opposition to racism and xenophobia."

PAKISTAN: Muslim Students Association protesters in Karachi burn a French flag next to illegible pictures of Emmanuel Macron during the recent demonstration against the French leader today 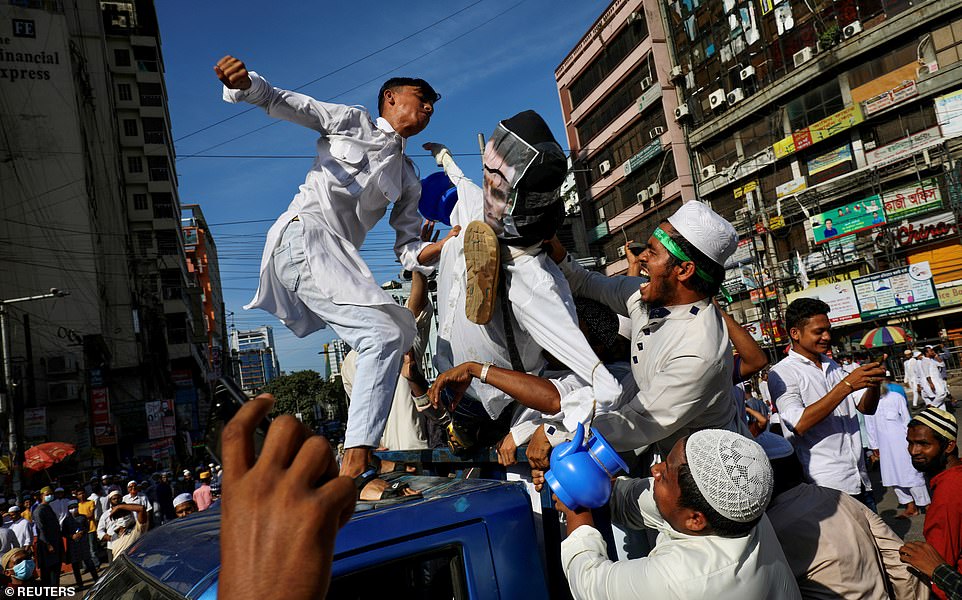 BANGLADESH: Muslim protesters hold up a likeness of Emmanuel Macron after Friday prayers as they take part in a protest calling for a boycott of French products, while Macron's stance on blasphemous cartoons is angry 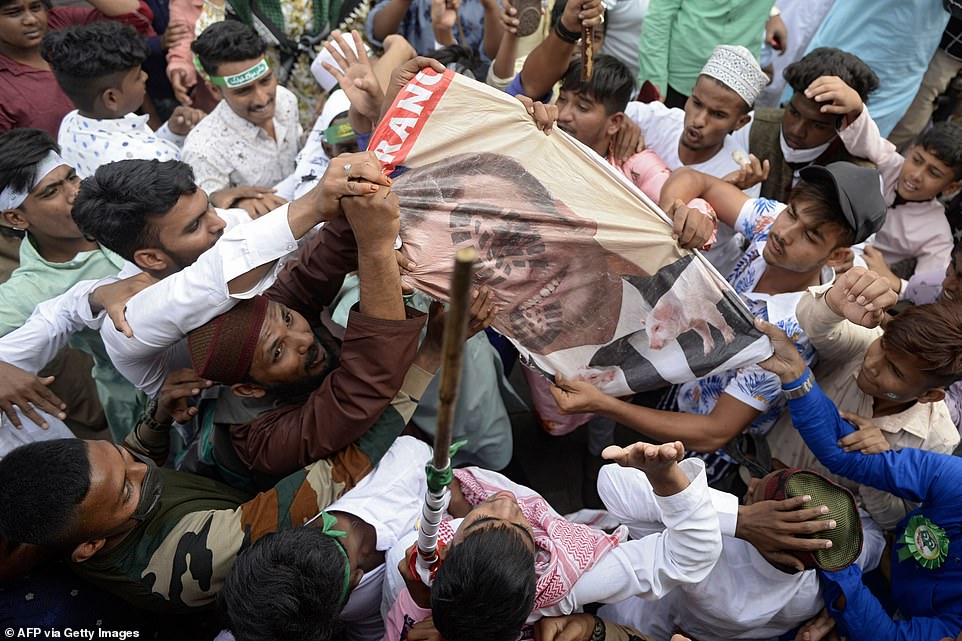 INDIA: Muslim protesters shout slogans as they tear up a Macron placard during a protest in Hyderabad on Friday 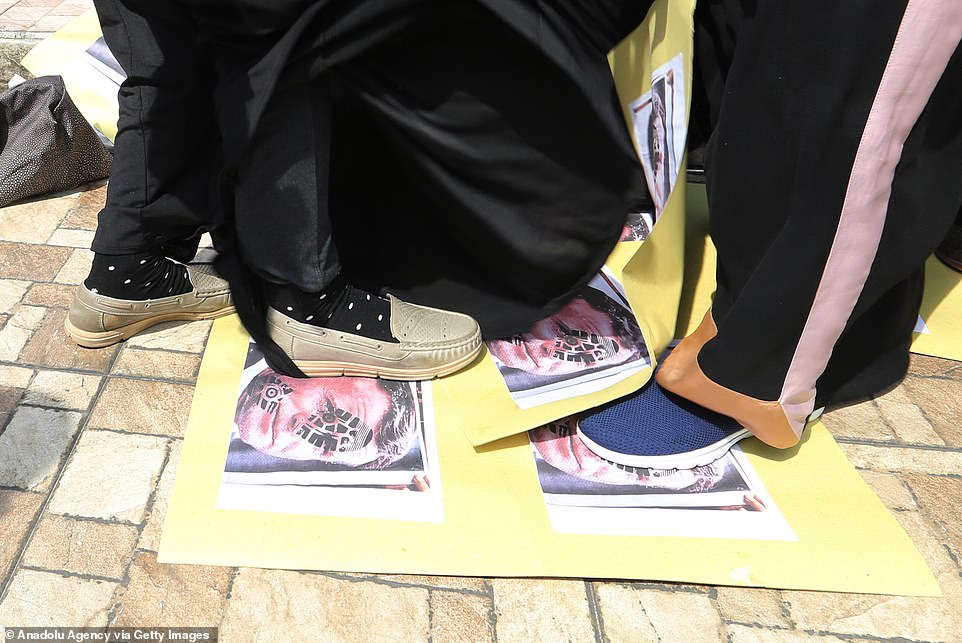 INDONESIA: In Medan in the Indonesian province of North Sumatra – the country with the world's largest Muslim population – people stand on Macron portraits that are defaced with footprints 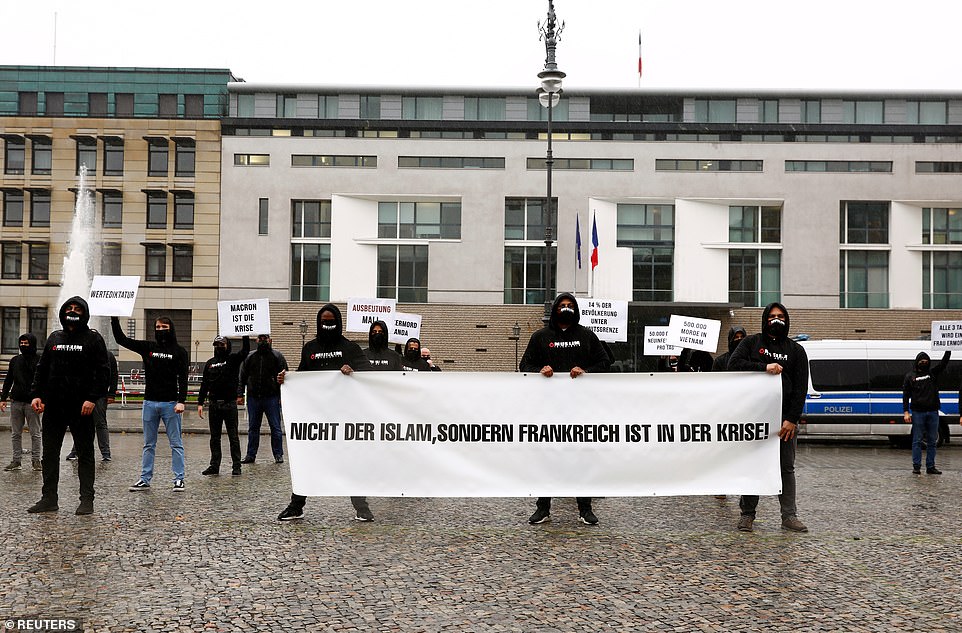 GERMANY: Muslim demonstrators hold up a banner in front of the French embassy in Berlin that reads: "It is not Islam that is in crisis, but France". This relates to Macron's statement that Islam is "a religion in crisis around the world". Another poster says "Macron is the crisis"

Nurmagomedov, from the Muslim-majority Russian-majority Republic of Dagestan, accused the French president and his supporters of using the slogan of freedom of expression to "harm the sentiments of more than one and a half billion Muslim believers".

May the Almighty humiliate them in this life and in the next. Allah calculates quickly and you will see, ”he wrote.

“We are Muslims, we love our Prophet Muhammad (peace and blessings of Allah be upon him) more than our mothers, fathers, children, women and all other people close to our hearts.

"Believe me, these provocations will return to you, the end is always for the godly."

Erdogan's spokesman Fahrettin Altun condemned the Nice attack, but said that "such senseless violence has nothing to do with Islam or Muslims".

"We will continue to confront any politician who offends our religion and values," he said.

“We believe we don't owe anyone an apology for expressing our strong opposition to racism and xenophobia. We refuse to make any effort to associate ourselves with any type of violence. & # 39; 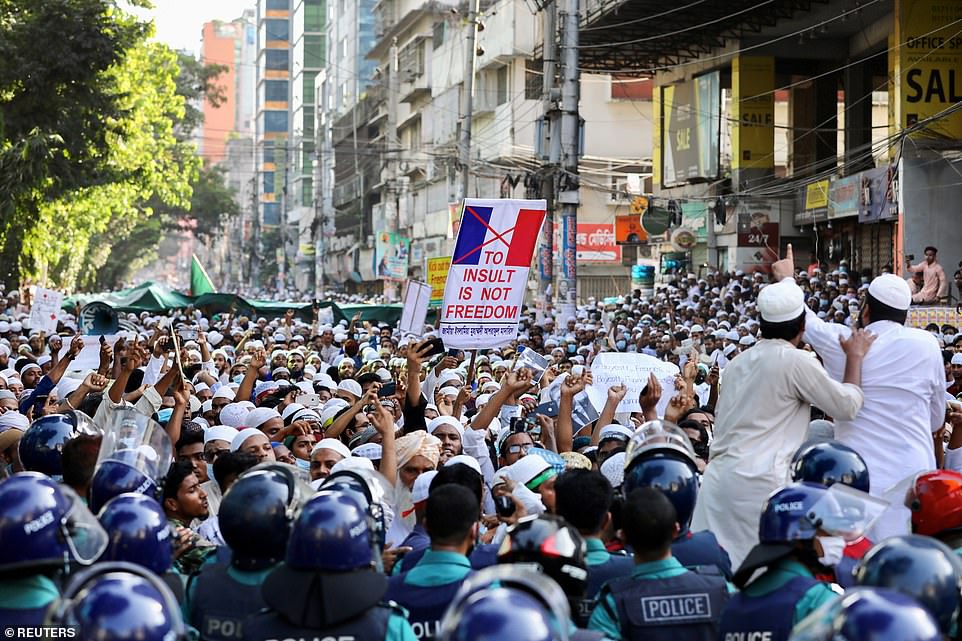 BANGLADESH: A banner with a cross over a French flag and a slogan that reads “Offense is not freedom” is held up during a march that is being watched by police in Dhaka today 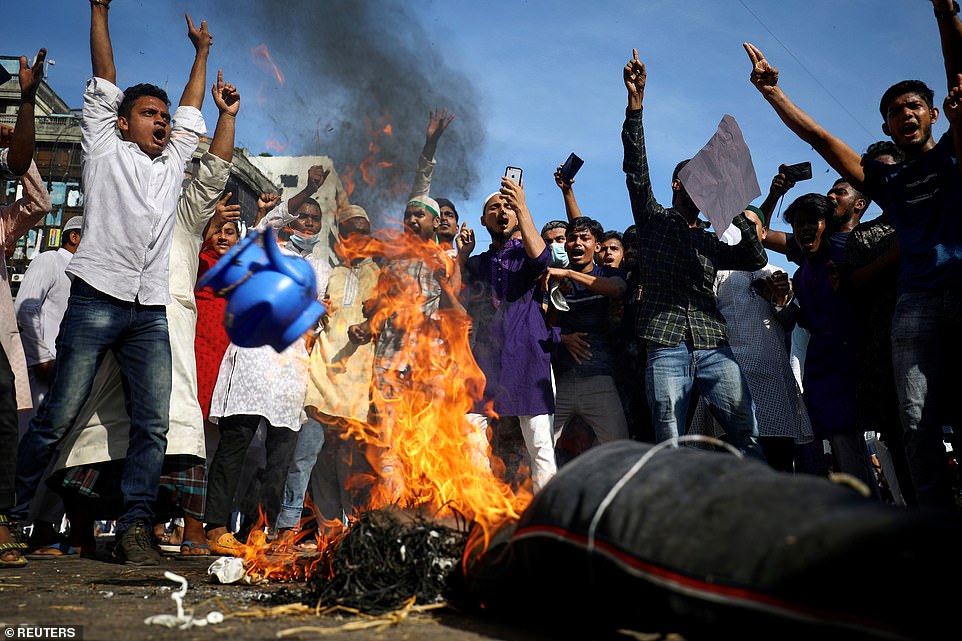 BANGLADESH: A Macron image goes up in flames to the delight of Muslim demonstrators during a demonstration in Dhaka today 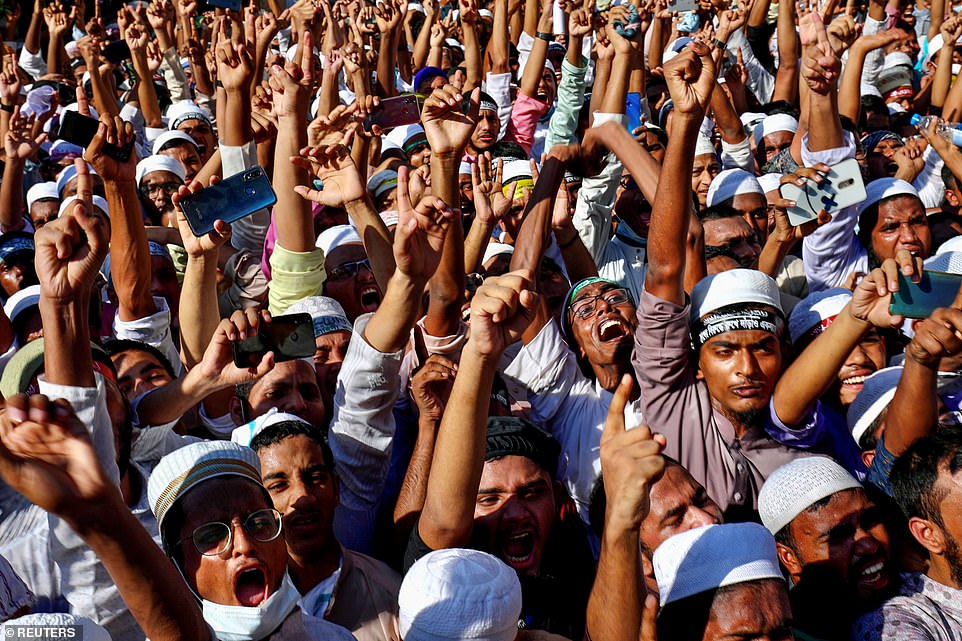 BANGLADESH: A crowd of Muslim worshipers chant slogans after Friday prayers calling for a boycott of French goods 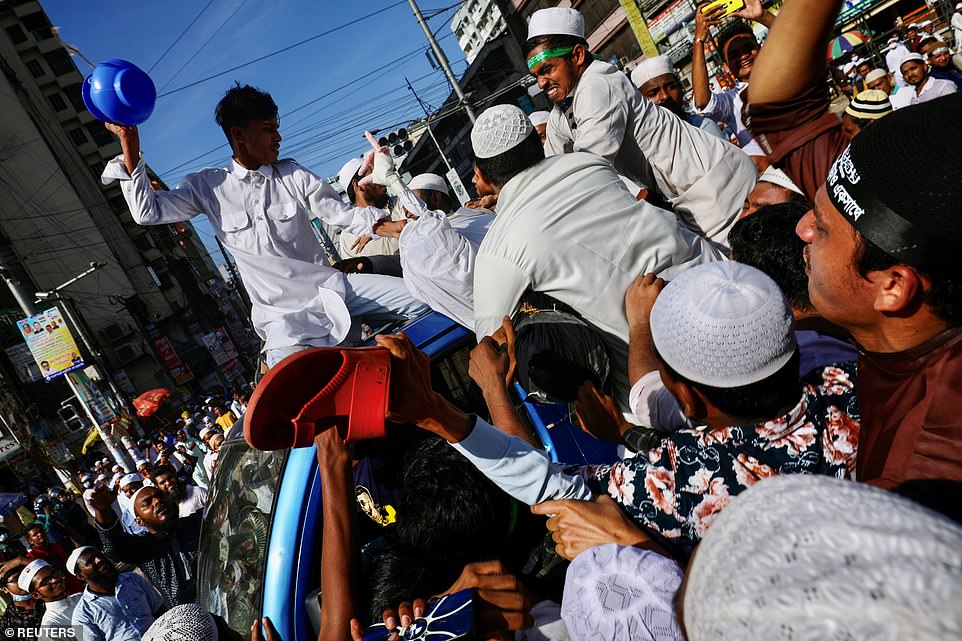 BANGLADESH: Protesters attack a Macron image as they take part in a protest in Dhaka the day after a terrorist attack in Nice 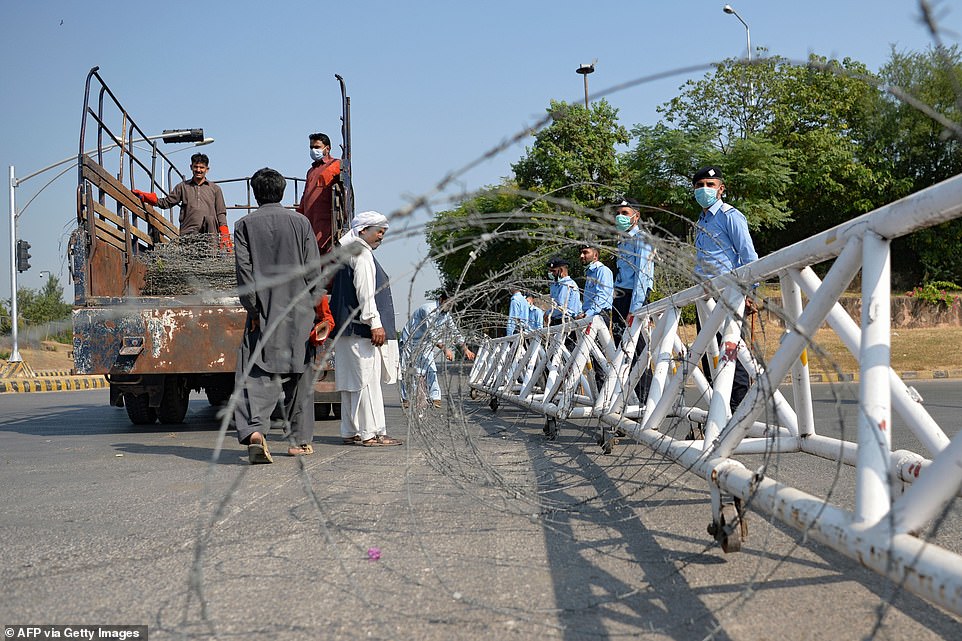 PAKISTAN: Security guards laid barbed wire on a road leading to the French embassy in Islamabad the day after a security guard stabbed a French consulate in Saudi Arabia amid high tensions between France and the Muslim world 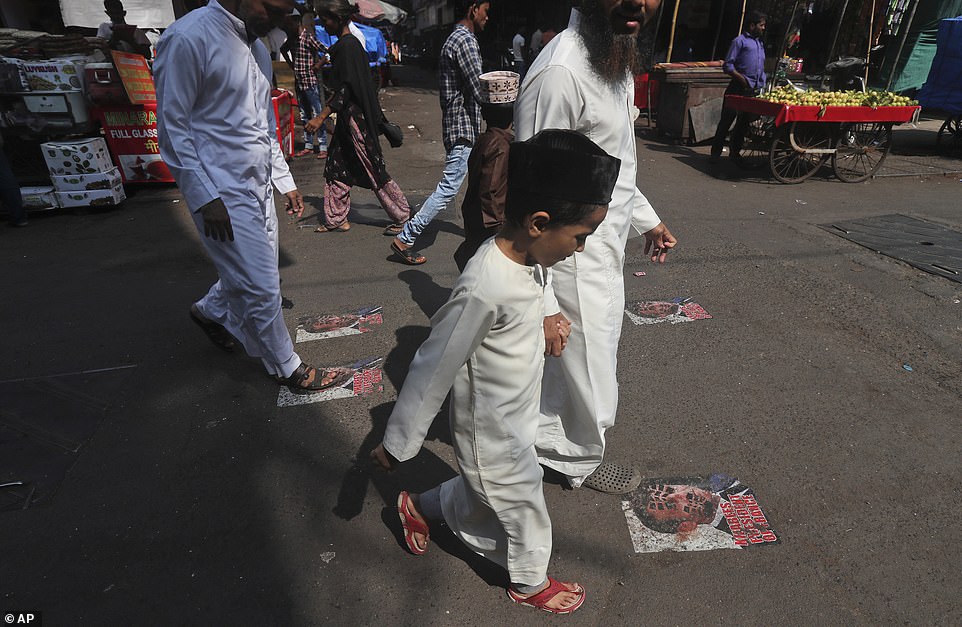 INDIA: A child looks at an illegible picture of Emmanuel Macron, one of several identical portraits lying on a street in Mumbai 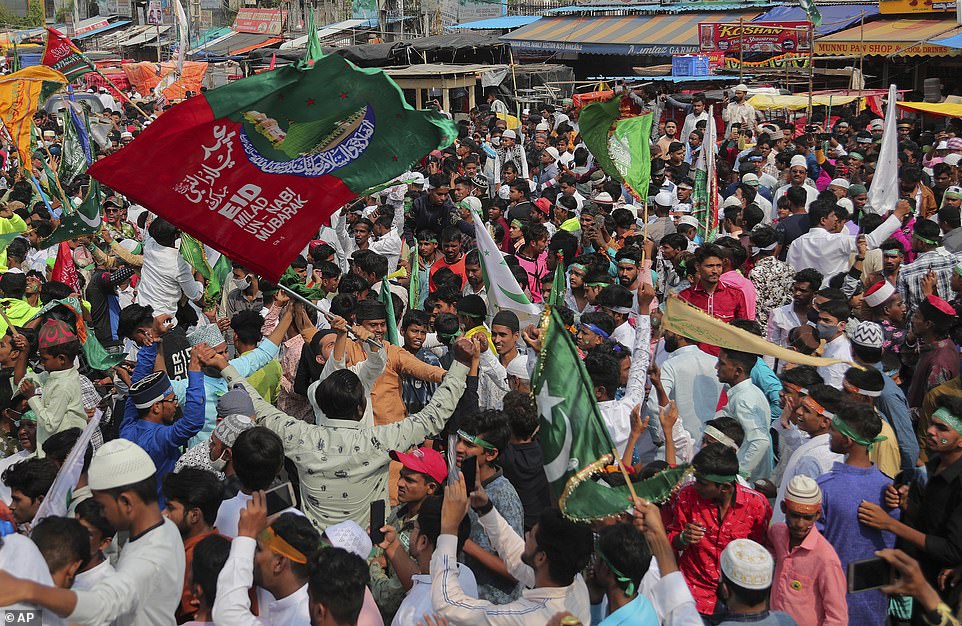 INDIA: Slogans are shouted during today's protests in Hyderabad as tensions continue to mount after Thursday's terrorist attack 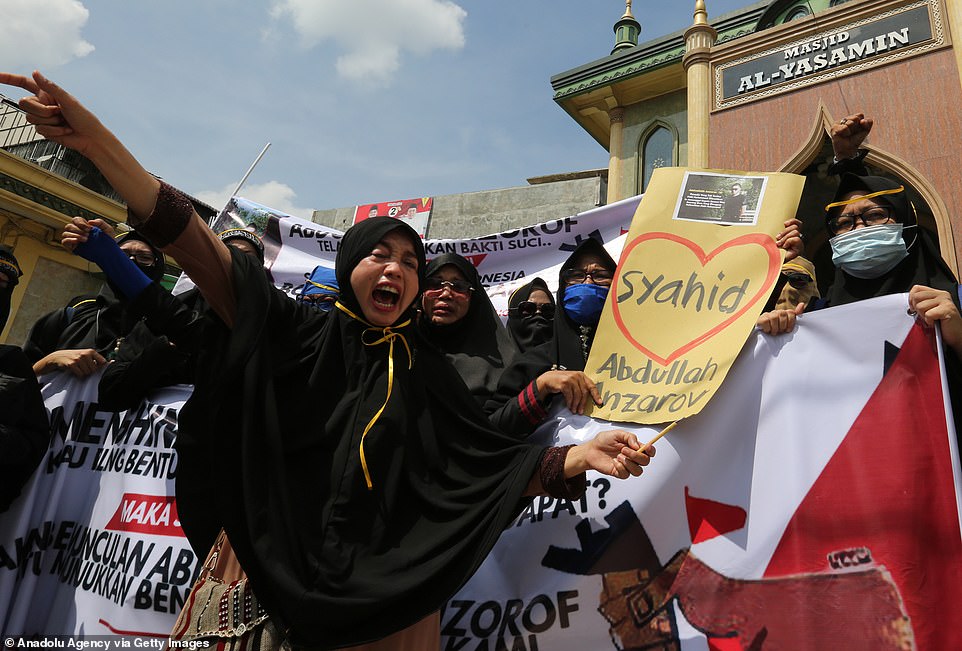 INDONESIA: Protesters today express their anger at the offensive cartoons in Medan. One holds a poster with Abdullah Anzorov, the Chechen terrorist who murdered the school teacher Samuel Paty near Paris

INDONESIA: Protesters hold pictures of Macron's face covered with a footprint during a demonstration in Bandung today

In the past week, protests and calls for a boycott against French products have spread rapidly from Bangladesh via Pakistan to Kuwait. Social media pulsed with anti-France hashtags.

Muslim leaders, particularly Turkish leader Recep Tayyip Erdogan, have loudly criticized France for what they see as the government's provocative and anti-Muslim stance.

Erdogan made a special exception after being mocked himself in a Charlie Hebdo cartoon in which he lifted a woman's skirt to look at her bare bottom.

The Turkish President called the cartoonists "villains" and accused the West of trying to "restart" the Crusades by attacking Islam after the picture appeared on the front of this week's magazine.

Meanwhile, Pakistani Prime Minister Imran Khan called for an end to the "attacks on Islam" and said the West should be ready to treat blasphemy in the same way as Holocaust denial.

And in Cairo, Egyptian President Abdel-Fattah al-Sisi said that freedom of expression should stop when more than 1.5 billion people are insulted, based on the number of Muslims. 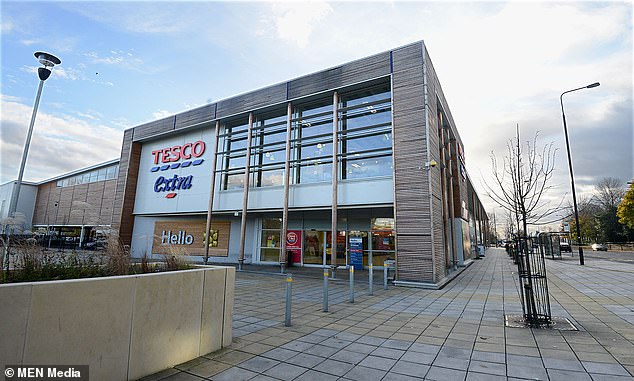