New York governor Andrew Cuomo has defended sending more than 4,300 patients who have been confirmed or suspected to have coronaviruses from hospitals to nursing homes.

The governor criticized the criticism during his press conference on Saturday, blaming President Donald Trump by saying, "Don't criticize the state for following the president's policies."

Cuomo has been under fire since it was announced on Thursday that the 4,300 recovering coronavirus patients had been taken to New York's already vulnerable nursing homes.

In total, there were more than 5,800 deaths in nursing and adult care facilities in the state.

He was urged to comment on the policy during his briefing on Saturday, saying "New York was following the instructions of the President's agency."

The governor of New York, Andrew Cuomo, said in a press conference on Saturday: "Don't criticize the state for following the president's policies." 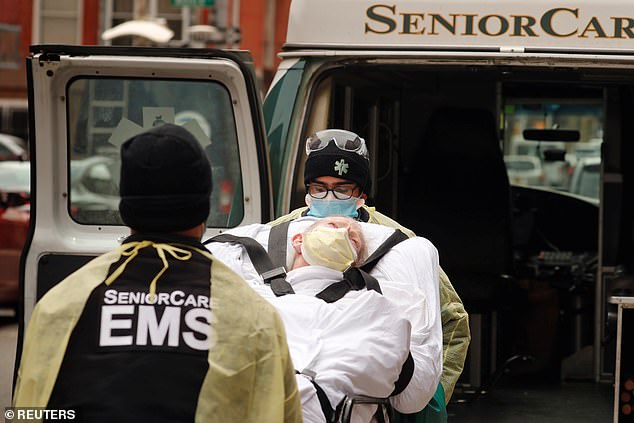 It was announced on Friday that 4,300 coronavirus patients had been brought to New York's nursing homes, which were already at risk, according to state guidelines. The pictured rescue workers roll a man out of the Cobble Hill Health Center nursing home in Brooklyn, New York.

The state directive that nursing homes could not refuse admission of hospitalized patients diagnosed with COVID-19 was issued on March 25.

It was finally scrapped under widespread criticism that it accelerated the country's deadliest outbreak when patients went home and infected more residents, ultimately resulting in more than 5,800 deaths in New York nursing and adult care facilities.

Cuomo has denied that the policy contributed to one of the deaths.

"I can say that, but we are still in an election year and people are playing politics and this is a non-partisan environment to the extent that people want to politicize this issue and Republicans say" Well New York did it ".

"New York followed the presidential agency's instructions. It depoliticized it," he added.

"So don't criticize the state for following the President's policy."

Cuomo also turned to his top advisor, Melissa DeRosa, who repeated that the state had only followed the instructions from the disease control centers.

"The policy of the New York Department of Health was directly in line with the March 13, CDC and CMS policy, which said," Nursing homes should accept all patients from hospitals where COVID is available. "Couldn't, should," said De Rosa.

"This is President Trump's CMS and CDC. 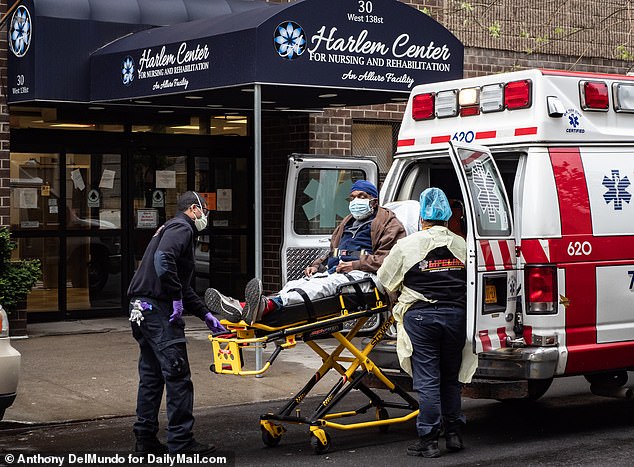 Governor Cuomo has been under fire since it was announced that the 4,300 recovering coronavirus patients had been taken to New York's already vulnerable nursing homes. The medical staff pictured look after a patient in front of the Harlem Center for Nursing and Rehabilitation in early May

"So I know there has been a lot of discussion on the subject. There were over a dozen states that did the same thing and were concerned about hospital capacity," she added.

Cuomo's response to the backlash from being admitted to a nursing home came after a senior News News meteorologist announced that she had blamed the New York governor for the death of her in-laws at COVID-19 in a nursing home.

Janice Dean told Fox News on Thursday that she felt compelled to comment after the governor appeared on CNN, where Chris Cuomo teased his older sibling because of his big nose.

Dean said that her mother-in-law and father-in-law Michael and Dolores Newman both died of COVID-19 after being exposed to the virus in nursing homes.

Her father-in-law Michael, an Air Force veteran and a former New York firefighter, was taken to a nursing home after it turned out that he had dementia.

Dean said that a week before Michael's death, she and her husband were notified that the nursing home had moved him to another floor.

"I believe the floor was used to help COVID patients recover," said Dean. "I can't prove that. We can't get confirmation of that."

Democrat Cuomo lifted the directive on May 10, which should help free up hospital beds for the sickest patients as the number of cases increases.

But he continued to defend it this week, saying he didn't think it had contributed to the more than 5,800 deaths in nursing and adult care facilities in New York – more than in any other state – and that homes should have spoken if it did would have been a problem. 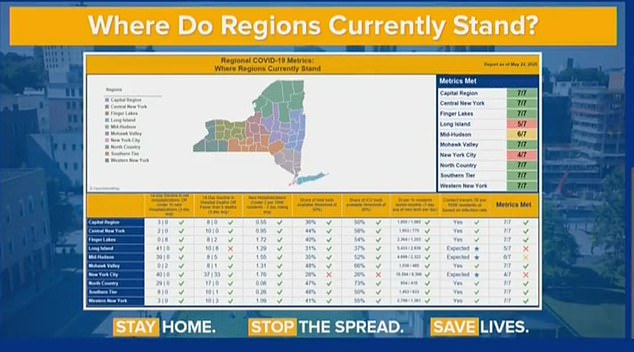 New York City still only meets four of the seven criteria that must be met to begin the first phase of reopening. More hospital and intensive care beds need to be available Governor Cuomo said the Mid-Hudson region could be reopened this week once more contract tracers are trained on Memorial Day weekend. Six of the requirements have currently been met

Governor Cuomo also announced on Saturday that the Mid Hudson and Long Island regions are nearing all the criteria that will allow them to begin the first phase of reopening. However, there was no mention of when New York could expect the same.

Mid-Hudson meets the criteria that will allow him to open Tuesday and Long Island, possibly until Wednesday.

New York City is said to remain closed, however, as an acceptable percentage of hospital beds or intensive care beds is not yet available.

At 28 percent, the number of hospital beds available is just below the required threshold of 30 percent.

The governor announced that there were 84 new coronavirus deaths in the state on Friday, a decrease that continues to be "good news".

It was the first time since March 23 that the daily death toll in New York State has dropped below 100. 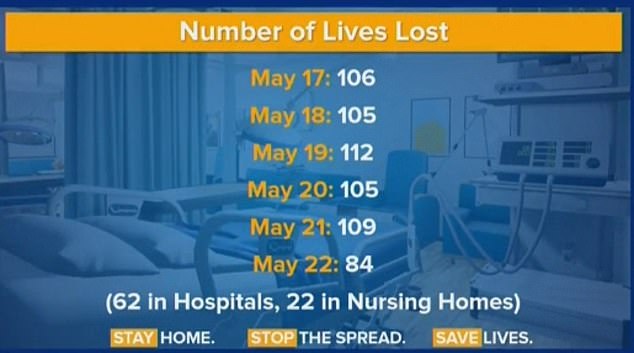 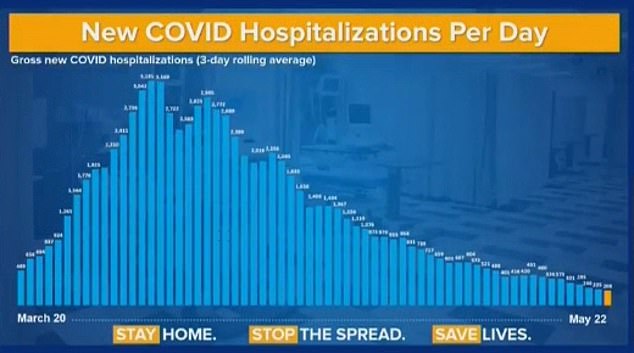 Coronavirus hospitalizations continue to decline in the state of New York

Governor Cuomo said on Saturday that at the height of the pandemic, he tried to get below 100 on the advice of a doctor.

Hospitalization and new cases in hospital emergency rooms continue to decline, but the governor warned that residents must remain vigilant on Memorial Day holiday weekend.

He was asked about the possibility of preventing visitors from other states with worsening outbreaks from traveling to New York, but said that he did not consider it legally possible.

The governor set about not being able to prevent visitors from Europe from coming to New York when the outbreak started because they were not told that the virus had already spread from China, but that the state was unable to would have been to implement a ban.

"I don't know if a state can legally exclude other states from entry, and I don't think it's a good policy," said Cuomo. "And I know when the shoe was on the other foot, I thought it was wrong then, and I did." think it's wrong now. & # 39;

"I couldn't even hug my father at my mother's funeral": Twitter bangs "hypocrite" Dominic Cummings
Health chiefs accuse Boris Johnson and Keir Starmer of using the NHS as a scapegoat in the guilt game
Comment