A large majority of schools will be ready to re-admit all students full time at the beginning of the semester, according to the principals.

The Union of the National Association of School Directors (NAHT) said 97 percent of schools are ready to reopen on schedule to strengthen the government as a number of educational failures plague it.

Most of them successfully implemented security measures in the summer.

The survey of more than 4,000 members showed that more than nine out of ten schools have already organized additional cleaning and student bubbles, as well as staggered break times and lunches.

However, the union's general secretary Paul Whiteman warned schools that the government could no longer have last-minute plans after the use of masks was reversed a few days before the semester began. The survey of 4,000 members showed that more than nine out of ten schools have already organized additional cleaning and pupil bubbles as well as staggered break times and lunches (stock).

The tiny percentage of schools that fail to fully open early in the school year are planning transition periods for new students or gradual entry to ease student anxiety, NAHT said.

Mr. Whiteman said, “Everyone wants the students to be back in class with their teachers and classmates next week. These numbers clearly show that school principals and their teams worked incredibly hard over the summer to prepare schools for the start of the fall semester. & # 39;

Mr. Whiteman added, "The government's long list of delays, U-turns and uncertainties did not help in the least, but the principals and their teams have persevered with their task." 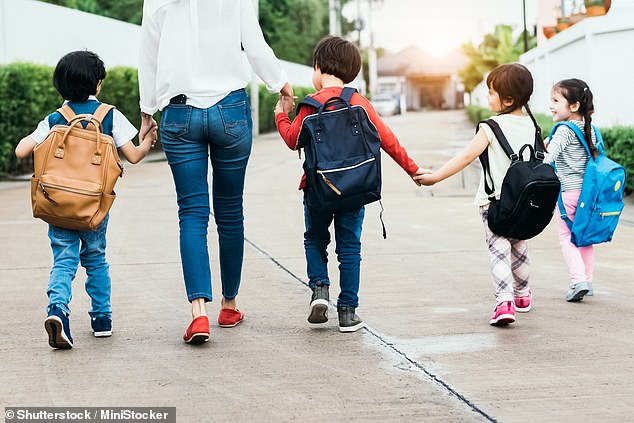 He also called for a "plan B" from the government in the event of local virus spikes.

Education Secretary Gavin Williamson said, "Getting all children back into the classroom is a national priority and these results shed light on the brilliant work that is being done across the country to ensure our schools are ready."

Almost every fifth mother is still not sure whether to send her children back to school, according to a survey.

The results have raised concerns that families, not teachers, are most likely to hinder full return.

In a survey of 2,000 users of the Netmums website, 19 percent said they were concerned about children who pass Covid-19 on to their families.

School principals hope to get students back to school in September, according to a new survey:

A survey by The Times found that at least 200 schools have staggered times, starting sooner or later for different annual groups.

An academy trust, the Academies Enterprise Trust, which runs 52 schools, said most of its facilities had staggered starts and ends.

Transport is also likely to be a problem as it is possible to move away from public transport. According to The Times, a school in Leicester created walkways and pathways to encourage students to walk or cycle to and from school.

The opening times on Saturday could also be introduced. Two academy trusts will open on Saturdays to help children catch up on work missed during the six-month school closure due to Covid-19, according to The Times.

Zones for different bubbles and groups

The survey also found that some schools set up zones within school areas to prevent bubbles from mixing. Have bosses at a school in Cheshire created 12 mini-playReasons surrounding the website to keep student groups separate, the paper reports.

Other ideas featured in the survey are longer lessons to limit movement between classes while teachers could encounter bad behavior harder to limit distractions and keep coronavirus safe.